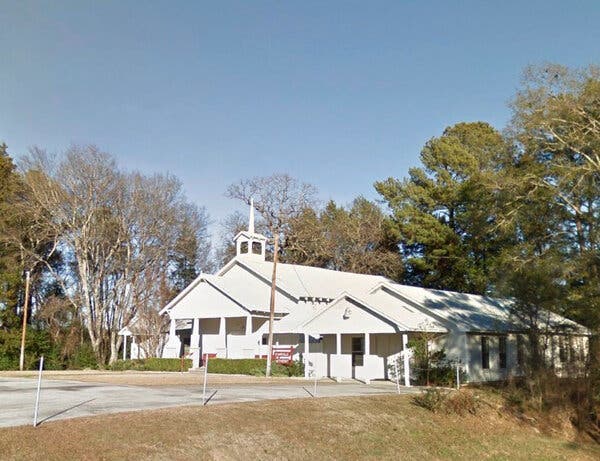 The pastor of a Methodist church was killed with his own gun by a fugitive who had taken shelter in the building overnight, the authorities said.

A shooting at a church in Texas on Sunday left a pastor dead and three others, including the gunman, injured, the authorities said.

The shooting occurred at Starrville Methodist Church in Smith County, about 100 miles east of Dallas.

The gunman had been the subject of a police chase on Saturday evening, Sheriff Larry Smith of Smith County said at a news conference on Sunday.

It was unclear what set off the chase but the sheriff said the plates on the Volkswagen Jetta the man was driving were “fictitious — they didn’t belong on that vehicle.”

During the chase, the gunman brandished a shotgun through the sunroof of the Jetta, he said. A state trooper in a patrol car struck the car that the man was driving and the man fled into the woods, Sheriff Smith said.

A two-hour manhunt, in which drones and dogs were used, was unsuccessful, he said. The man took refuge in the church sometime late Saturday or early Sunday.RACE/RELATED: A deep and provocative exploration of race, identity and society with New York Times journalists.Sign Up

Around 9:30 a.m. local time on Sunday, the pastor, his wife and two others entered the church, unaware that the fugitive was inside, Sheriff Smith said.

The man, who had been hiding in the restroom, confronted the pastor, who drew his gun and asked the gunman to leave, the sheriff said.

But as they moved toward the front door, the man lunged at the pastor and took hold of the gun, shooting and killing the pastor. It was unclear what type of gun the pastor had or what happened to the shotgun the man had during the chase.

The gunman, who was not identified, sustained a gunshot wound to his left hand, Sheriff Smith said, though it was unclear who shot him.

One other person was shot and was in surgery at UT Health East Texas hospital on Sunday afternoon, officials said. That person’s condition was unclear.

Another person, a woman who was not shot, had non-life threatening injuries from a fall during the chaos after the shooting. She was in the same hospital in stable condition, a spokeswoman for the hospital said.

The shooting happened before people had gathered for church services.

There were four people, excluding the gunman, in the church at the time of the shooting, Sheriff Smith said. The authorities did not immediately identify the victims.

The shooting did not appear to have a religious motive, the sheriff said.

“It was convenient for the guy to come out of the woods — it was cold last night — find him a warm place to stay and, apparently, he was still there when they came to church this morning,” Sheriff Smith said.

The gunman “had one of the red bank bags that belonged in the church in his hand” when the pastor discovered him in the restroom, Sheriff Smith said.

The gunman fled the scene in the pastor’s car before being apprehended by the state authorities, the sheriff said. The gunman is set to be transferred to the custody of the Smith County Sheriff’s Office for questioning.

Sheriff Smith said he would present capital murder charges to the district attorney, Jacob Putman, who did not immediately respond to a request for comment on Sunday.

Gov. Greg Abbott said in a statement that the state was “working closely with first responders and local officials to ensure that justice is served and that the Starrville community has the resources it needs during this time.”

In a separate message on Twitter, he said, “Texas will seek swift justice for the shooter.”