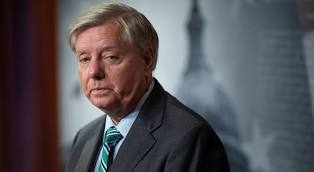 Justice Clarence Thomas on Monday agreed to temporarily freeze a lower court order requiring the testimony of Republican Sen. Lindsey Graham in front of an Atlanta-area special grand jury that is investigating efforts to overturn the 2020 presidential election in the state.

Thomas acted alone because he has jurisdiction of the lower court that issued the original order.

Thomas’ move is an administrative stay that was most likely issued Monday to give the Supreme Court justices more time to consider the dispute.

The court has asked for a response from the Georgia investigators by Thursday.

Fulton County District Attorney Fani Willis, a Democrat, is spearheading a special grand jury investigation into Donald Trump-aligned efforts to manipulate the results of the 2020 election in Georgia. She has indicated that she would like to question Graham on calls he made to election officials in Georgia after the election.

The South Carolina Republican senator is arguing that such testimony is foreclosed by the Constitution’s Speech or Debate clause, which shields legislators from certain law enforcement action for conduct connected to their legislative duties.

A spokesperson for Fulton County declined to comment on Thomas’ move to pause the subpoena. CNN has reached to representatives for Graham.

Lower courts had said that, to the extent Graham was making the calls to the Georgia election officials as part of fact-finding for the congressional certification of President Joe Biden’s win, that could be out of bounds under the Constitution. But the 11th US Circuit Court of Appeals had said that “communications and coordination with the Trump campaign regarding its post-election efforts in Georgia, public statements regarding the 2020 election, and efforts to ‘cajole’ or ‘exhort’ Georgia election officials” are not legislative activities protected by the Speech and Debate Clause.”

The Fulton County probe was launched with the aim of looking at the hour-long January 2021 phone call from then-President Trump to Georgia Secretary of State Brad Raffensperger asking the election chief to “find” the votes necessary for Trump to win the state. The investigation now encompasses several other aspects of the Trump-world machinations to reverse his loss in Georgia, including presentations on unfounded election fraud claims to state lawmakers, the fake elector scheme, efforts by unauthorized individuals to access voting machines in one Georgia county, and a campaign of threats and harassment against lower-level election workers, CNN has reported.

The litigation over whether Graham can be compelled to testify before the special grand jury has been playing out since the summer.

Graham turned to the Supreme Court for intervention on Friday. He told the justices in court filings his phone calls with Georgia officials were related to the “impending vote on certifying the election,” and because, as chairman of the Senate Judiciary Committee at the time, he was charged with “reviewing election-related issues.”

However, the senator also argued to the high court that his motives were irrelevant to the protections that Constitution offers lawmakers for legislative conduct,

“The district court’s and District Attorney’s apparent suspicions about motives are baseless, but even assuming otherwise, the Speech or Debate Clause was designed to prevent exactly this sort of examination,” he wrote. He added that a lower court was “wrong, also, to think that any other lines of hypothetical questioning would be permissible.”

“These kinds of ‘administrative stays’ are not predictive of how the full court, or even the justice who issued it, is likely to vote,” Vladeck, said, as he noted a recent, separate case in which a lower court order from Justice Sonia Sotomayor was eventually allowed to go into effect after a brief pause so the justices could consider.

“The bigger question is how the full court is going to rule, and today’s order tells us nothing about the answer,” he added.