Washington (CNN)It’s a long-distance feud, transmitted over the airwaves and on social media, that’s now devolved well beyond a small political spat.

For President Donald Trump and his predecessor, Barack Obama, the animosity that started years ago has never waned, except for a month-long period during the presidential transition.
Now, the current and former president are carrying out the nastiest public dispute in modern presidential history, one that began on deeply personal terms and which now plays out nearly every time Trump finds a policy he dislikes or a perceived double standard. 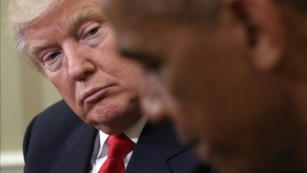 Trump’s strain with Obama marks departure from presidential fraternity
The acrimony is largely one-sided; while Obama has not made a direct assault on Trump’s character since last year’s presidential campaign concluded, Trump has steadily increased his stinging criticism of Obama.
This week, it was the previous administration’s response to Russian election hacking that drew Trump’s ire. Last week, it was his signature health care law. Since the final time they spoke on Inauguration Day, Trump has lit into Obama over his handling of North Korean hostages, his decision to join the Paris climate accord and his policy toward Cuba.
And then there’s his baseless accusation that Obama ordered wiretapping at Trump Tower, a charge he never fully explained and which he’s not yet retracted.
“He was very nice to me but after that we’ve had some difficulties,” Trump said nonchalantly to a CBS interviewer last month. “So it doesn’t matter. Words are less important to me than deeds. You saw what happened with surveillance, and everybody saw what happened with surveillance.”
In fact, few people saw what happened, at least in the way Trump described it. The accusation, which sources said annoyed the former president, was the moment it became clear to those in both Trump and Obama’s spheres that a functional relationship — which past presidents have long cherished with one another — was not in the offing.
“He hasn’t let up the entire time,” bemoaned one former Obama White House official, who said Trump was merely attempting to distract from is own woes by directing attention at his predecessor.
“He operates by making people his enemy,” said the official, who spoke anonymously to describe the relationship between the two presidents. “If it deflects the focus from being on him, that’s a win for him.” 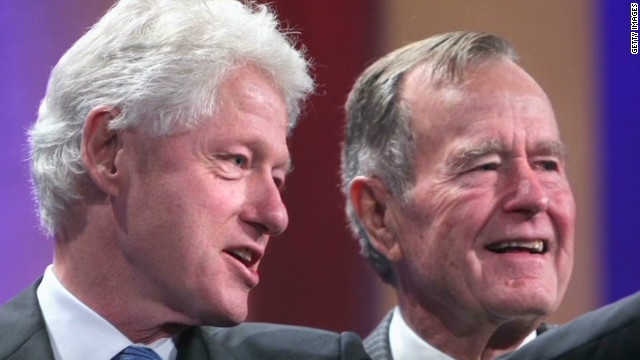 Not everyone gets along

Presidents don’t always get along with their successors. Differences in temperament and ideology usually accompany a handoff of power — the country, it turns out, is often looking for something new when electing a commander in chief.
Herbert Hoover dismissed Franklin D. Roosevelt’s New Deal programs, including Social Security, as “Fascist regimentation,” a loaded charge in 1935.
Harry Truman and Dwight Eisenhower sniped at each other for the entire limousine ride from the White House to the US Capitol ahead of Eisenhower’s inauguration, a sour episode that only unraveled further when Truman called Eisenhower a “coward” as he was leaving office (the men later reconciled at John F. Kennedy’s funeral).
And Ronald Reagan and Jimmy Carter battled over who caused the 1982 recession — a dispute that prompted Carter to publicly accuse his successor of not accepting the full duties of the job.
“When he is ready to accept those responsibilities, I’ll be there to help him,” Carter said.
In recent times, presidents have largely kept any disagreements between themselves quiet. Obama often bemoaned the state of the economy that George W. Bush left behind, but never attacked his predecessor personally. And while there remained some frostiness between Bush and Bill Clinton — the man who defeated his father in 1992 — the men eventually found ways to partner on global relief efforts.
“There have been instances in the past where the current president and a former president do not get along at all,” said Timothy Naftali, a historian at New York University who formerly served as director of the Richard Nixon presidential library.
“What’s different this time is that the two are showing it. That the animosity is so clear, and of course it’s more clear on the part of President Trump, but it can be inferred from the actions of President Obama,” he said. 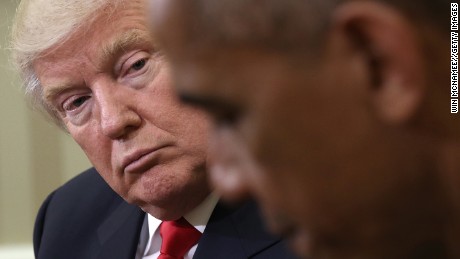 Sources close to Trump say he remains in a competitive stance against Obama, who campaigned heavily for Hillary Clinton in last year’s presidential election and offered withering criticism of Trump on the campaign trail.
Obama himself did not ease matters when, at the end of December, he suggested in an interview with his former senior adviser David Axelrod that he could have beaten Trump if he was running for president again. The boast infuriated Trump, according to a person familiar with his reaction.
One administration official said Trump is deeply sensitive to unfavorable comparisons between the pace of his presidency and Obama’s. And he has eyed with deep skepticism Obama’s emerging presence on the global political stage, where Trump feels increasingly isolated while some western leaders — including German Chancellor Angela Merkel, French President Emmanuel Macron and Canadian Prime Minister Justin Trudeau — align themselves in public with Obama in his post-presidency. 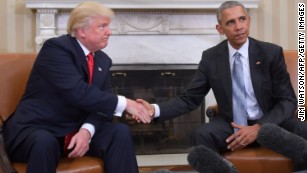 Trump’s new foil: a silent Barack Obama
Obama’s aides, meanwhile, say their boss treated Trump with respect during the transition period, but that a deep relationship between the two was never likely.
“He treated him as his successor and offered candid advice and perspective on a range of issues,” said one former White House official. “But Trump never struck him as a particularly deep or intellectually curious guy. We are seeing that in real time now. And the view that they had a bromance was silly. It was Obama trying to exhibit class in a difficult situation.”
Trump himself acknowledged in the CBS interview he has “no relationship” with Obama, and the two men have not spoken since Trump waved off Obama from the east front of the US Capitol on Inauguration Day.
There was an unsuccessful attempt by both men to connect shortly after Trump moved into the White House. Following tradition, Obama had left Trump a note on the Resolute Desk in the Oval Office, which Trump read and wanted to express his appreciation for, according to both a current White House official and a former Obama aide.
Through an aide, Trump tried to reach out to Obama. But his predecessor was traveling west to California, and couldn’t take the call. When one of Obama’s aides reached back out to the White House to return the call, the new president’s staffers said Trump just wanted to say thank you for the note — and wanted Obama to get the message. The men never connected directly.
Later, after Trump levied his wiretapping charge, top aides to the two men spoke over the phone. But a conversation between the two presidents themselves never materialized. 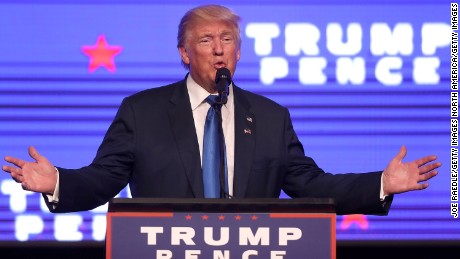 Years of tension
Since then, there have been no attempts to cool the tensions, according to both men’s aides. Instead, the strain has only worsened — a worrying sign, according to historians.
“If there is no relationship between a president and an ex-president, that means the country is denied the benefit of the experience and wisdom of somebody who has held the most difficult job in this country,” Naftali said. “It robs not only the legacy of that former president, but it denies the country of that person’s skill set. So I don’t think anybody wins.”
Unlike most presidents and their predecessors, Trump and Obama found themselves mired in acrimony years before they were brought together as members of the most exclusive club in politics.
Trump spent months in 2010 stoking the false birther theory, which suggested Obama was born outside the United States and was therefore ineligible to serve as president.
Even as late as last year, Trump left unanswered whether he believed Obama was telling the truth about his birthplace. Trump eventually did convene a statement to address the issue, but when reporters arrived to cover it, they discovered the event was mainly meant to promote the opening of Trump’s new hotel.
In 2010, when Trump was stoking the birther movement, few in the White House would have imagined that Trump would one day be positioned to unravel major elements of Obama’s presidential agenda. Indeed, Obama himself ruthlessly mocked Trump during a speech at the 2011 White House Correspondents Dinner.
This week, Trump escalated his attacks on Obama over the Russia hacking, claiming Obama had done little to combat Moscow’s cybermeddling in last year’s presidential contest.
“The reason that President Obama did NOTHING about Russia after being notified by the CIA of meddling is that he expected Clinton would win and did not want to ‘rock the boat,’ ” Trump tweeted. “He didn’t ‘choke,’ he colluded or obstructed, and it did the Dems and Crooked Hillary no good.” 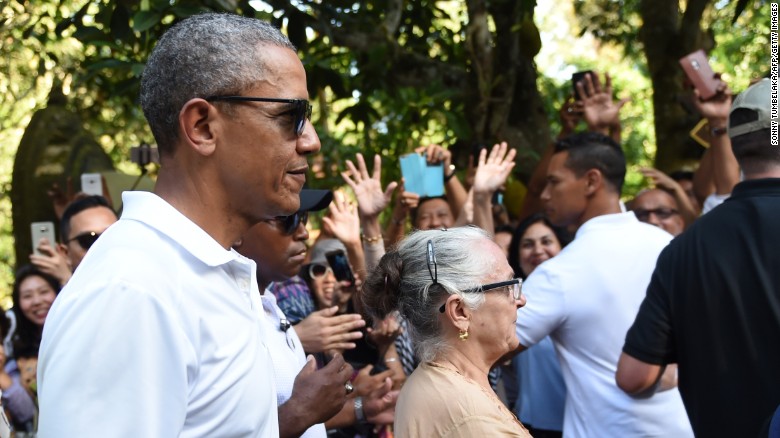 Obama appeared less than disturbed by the barbs when he was photographed, along with his family, on vacation in Bali this week. His Oliver Peoples sunglasses in place and a grin pasted on his face, the former leader strolled through the Tirta Empul temple at Tampaksiring Village, his secret service detail corralling a crowd straining to take his photo. 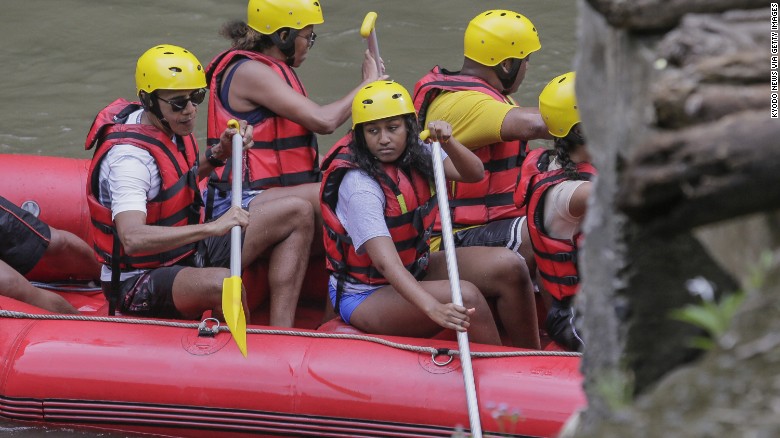 Earlier in the week he was seen careening down the Ayung River in a red raft, a yellow helmet in place, and the ever-worsening rhetoric aimed his direction by Trump half the world away.