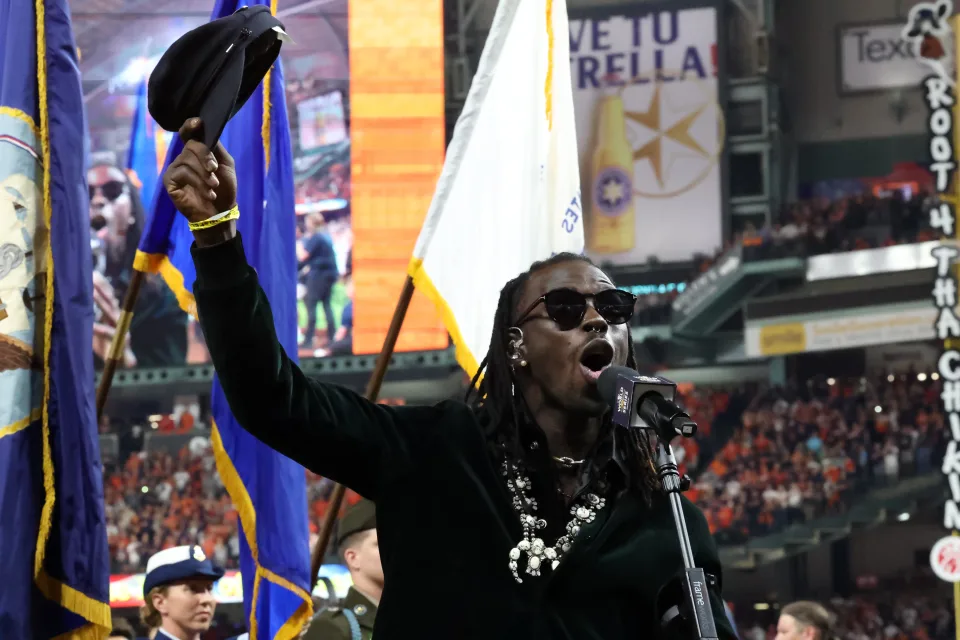 The first error(s) of the 2022 World Series came before its first pitch, courtesy of Eric Burton.

The Grammy-nominated singer/songwriter of the Black Pumas opened Game 1 of the Fall Classic on Friday with a rendition of “The Star-Spangled Banner” containing multiple lyrical errors and pitch issues.

Burton was in trouble just a couple notes into the performance at the Houston Astros‘ Minute Maid Park, but the misadventures didn’t really start until he reached second stanza. To get a sense of what went wrong, here are the first two stanzas of the national anthem as they are supposed to be sung:

Oh, say, can you see

By the dawn’s early light

At the twilight’s last gleaming?

Whose broad stripes and bright stars

Through the perilous fight

O’er the ramparts we watch’d

Were so gallantly streaming?

And here’s what Burton ended up singing:

Oh, say, can you see

By the dawn’s early light

At the twilight’s last dreaming?

Whose broad stripes and bright stars

Through the perilous fight

At the twilight’s last streaming?

Someone tell Eric Burton to learn the lyrics to the National Anthem before you sing it before game 1 of the #WorldSeries
pic.twitter.com/kwPCnU6rs4

Basically, Burton repeated the second half of the first stanza during the second stanza, but remembered the right word at the end of the line. Here’s the whole thing:

Say what you will about Fergie’s performance of the anthem, at least the Black Eyed Peas singer knew the words of the song.

As you can imagine, social media had plenty of words for Burton’s performance, with nearly none of them kind.

Was it just me or did Eric Burton mess up the national anthem?#WorldSeries

Uhhh dude just messed up a BUNCH of the lyrics to the national anthem. What the actual f. 🇺🇸 #WorldSeries

Aaaaaand we've already screwed up the National Anthem. World Series is off to a banger of a start.

This guy doesn’t know the lyrics to the anthem.

Burton, who performed during President Joe Biden’s inauguration last year, has received Grammy Award nominations for Best New Artist, Record of the Year, Album of the Year, Best American Roots Performance, Best Rock Performance and Best Rock Album as a member of the Black Pumas, which are based in Austin, Texas. Their “Colors” single, released in 2019, was certified gold by the RIAA.

The performance wouldn’t be the last misstep for the home team, as the Astros later lost 6-5 in Game 1 to fall behind 1-0 in the best-of-7 series.