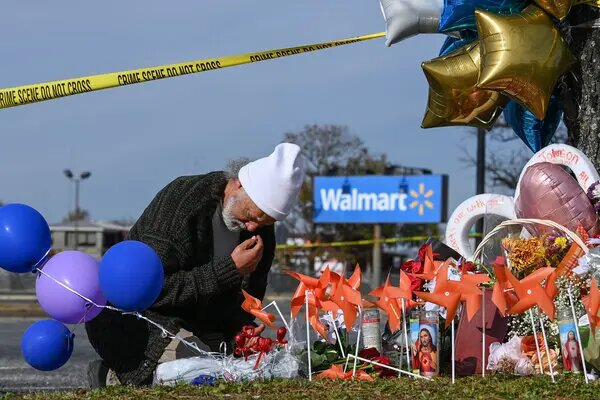 A message found by the police on the killer’s phone asked God to forgive him for targeting co-workers, whose deaths were the latest in a string of mass shooting fatalities.

The Walmart supervisor who shot and killed six of his co-workers at a store in Chesapeake, Va., this week purchased a pistol only hours before the massacre and left a note on his phone, in which he described planning to target some colleagues and spare others, according to new details released on Friday.

With loved ones of the victims continuing to mourn and a candlelight vigil planned by the city on Monday, the note provided the first indication of what led to the eruption of workplace violence on Tuesday night in a Walmart break room, where members of what has been described as a close-knit overnight team were gunned down.

As with a seemingly endless series of recent mass shootings across the country — through a Raleigh, N.C., neighborhood, at an Indiana mall’s food court, inside a Colorado nightclub — the employee’s ability to purchase the weapon and quickly use it provided yet another grim data point in the nation’s ongoing tug of war over gun violence.

President Biden, speaking to reporters on Thanksgiving Day, said he would press for new restrictions in Congress, particularly on military-style rifles.

Asked whether he could do anything about gun violence before Republicans take power in the House of Representatives next year, Mr. Biden said, “I’m going to try. I’m going to try to get rid of assault weapons.”

While such weapons have figured into several mass shootings in recent months, including at an elementary school in Uvalde, Texas, and in a grocery store in Buffalo, N.Y., the gunman in the Chesapeake Walmart opened fire with a newly acquired 9-millimeter handgun.

“The gun was legally purchased from a local store on the morning of Tuesday,” Chesapeake city officials said in a statement, adding that the gunman “had no criminal history.”

The police found a box of ammunition as well as a receipt and other paperwork related to the purchase of the gun, the city said. Officials did not say where the gunman had bought the weapon.

The police also said an analysis of a phone belonging to the gunman, identified as Andre Bing, 31, turned up a message that he called a “death note,” in which he said employees at the store had mocked him and compared him to a serial killer. The phone was found at the scene, officials said when posting the message on Twitter.

In the message, the gunman said he would not kill an employee who had cancer because the gunman’s mother had died from the disease. “My God forgive me for what I’m going to do…” the note ended. Officials said that investigators were still trying to determine when the note had been written.

The massacre at the Chesapeake Walmart was the second high-profile mass shooting in the state in less than two weeks. Earlier this month, a student at the University of Virginia shot and killed three members of the school’s football team on a bus after a class trip.

“Too many families will have an empty seat at their tables at Thanksgiving and Christmas,” said the State Senator L. Louise Lucas, a senior leader in the Virginia legislature. “My thoughts and prayers are with those families, but my actions will be working tirelessly to fix our gun laws until we stop this violence.”

Democrats in Virginia have enacted several new restrictions on gun purchases in recent years, including universal background checks. But based on the information that officials have released, it did not appear that any of the regulations would have applied to the Walmart gunman. Like most states, Virginia does not require a waiting period for firearm purchases.

Republicans in Virginia, who now control the House of Delegates, have not indicated interest in pursuing further regulations, and Gov. Glenn Youngkin, a Republican, has said that if his party took control of the State Senate as well, he would back a repeal of some of the restrictions put in place by Democrats.

In the aftermath of the Walmart shooting, Mr. Youngkin said Wednesday that it was too early at that point to begin talking about what policies should be pursued in response to the recent violence.

“The investigation at the University of Virginia and this investigation are still active. We want to gather all the facts, and then make good decisions,” the governor said. A spokesman for the governor did not add anything beyond those comments on Friday.

Gun control advocates pointed to policies that they said could reduce impulsive shootings of the sort that appeared to have occurred in Chesapeake and at Atlanta-area massage businesses in 2021, such as licensing requirements or waiting periods for purchasing.

“Waiting periods can meaningfully reduce gun suicides and homicides,” said Allison Anderman, senior counsel and director of local policy at Giffords, which advocates for stricter gun laws. “If there is a mandatory period for people to reconsider their actions, they may consider a different course. But being able to acquire a very lethal form of killing when they’re in a period of crisis is not a good idea.”

Messages seeking comment from the National Rifle Association and Gun Owners of America were not immediately returned. The N.R.A., on its website, calls waiting periods “arbitrary impositions” that do not impede crime or suicide.

According to a witness, the Walmart gunman opened fire without warning after entering the break room where his co-workers had gathered as their 10 p.m. shift began. The first call came to the police at 10:12 p.m., and officers entered the store about four minutes later, the authorities said. By that point, the gunman was already dead from what the police have said was an apparently self-inflicted gunshot wound.

The victims included several employees who had worked with him for years — Randall Blevins, Lorenzo Gamble and Brian Pendleton — and others who had more recently joined the staff, including Kellie Pyle and Tyneka Johnson. One victim was a 16-year-old boy identified on Friday by the authorities as Fernando Chavez-Barron.

Two people injured in the shooting remained hospitalized on Friday, including one in critical condition, officials said.

Former co-workers said the overnight team at the store had formed a close relationship but also recalled that Mr. Bing, as a supervisor, displayed some off-putting behavior. One former employee said that he could be aggressive. Another described him as “a loner.”

Shaundrayia Reese, 27, who had worked on the overnight crew, said that some on the team “did complain to the managers about Andre’s behavior.”

The note attributed to the gunman indicated a belief that at least one of his co-workers, whose names were redacted by the police, had been “trying to get rid of me since day one” and that his phone had been “hacked.” The note included several references to God, the Holy Spirit and Satan and suggested that the gunman had been concerned about having “social deficits” since he was a child.

In a statement in response to the release of the note, Walmart said on Friday that “there is nothing that can justify taking innocent lives.”