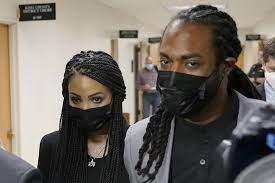 Longtime NFL cornerback Richard Sherman pleaded guilty to a pair of misdemeanor charges on Monday in Seattle following his arrest in the city in July, according to the Seattle Times.

Sherman pleaded guilty to first-degree negligent driving, speeding in a roadway construction zone and second-degree criminal trespass. He was fined $1,500, will be under monitored court supervision for two years and must attend a DUI victim’s panel within 60 days.

Sherman was arrested in July after police said he drove his SUV into a construction zone and crashed. He then fled the scene and tried to break into his in-law’s home later that night.

Video of that incident showed Sherman trying to break down the front door. Sherman’s wife, Ashley, called 911 and said that Sherman was “drunk and belligerent and threatening to kill himself.”

An investigation into the 911 call and how the dispatcher handled Ashley’s call was launched by the King County Sheriff’s Office. Audio of the call was released and drew immediate backlash over the way it was handled, as the dispatcher repeatedly interjected and cut off Ashley on the phone.

Sherman apologized on social media shortly after the incident, and promised to get help for his “mental and emotional health.” He was initially charged with five misdemeanors and felony burglary domestic violence, though the felony and three misdemeanors were later dropped.

“[The arrest] led to some really positive changes — some help, some therapies, some tools that I didn’t have before — to address some things that you kind of let stack up in your mind,” Sherman said in September, via ESPN. “You never have time to address them. It’s not the right moment. It’s not the right place in your life to deal with these emotions and feelings.”

Sherman had 11 tackles and one interception in five games last season for the Tampa Bay Buccaneers, his first with the team after a three-year run with the San Francisco 49ers. He missed most of the season with the Bucs due to hamstring, calf and Achilles injuries.

Sherman spent his first seven seasons in the league with the Seattle Seahawks, who took him in the fifth round of the 2011 draft. In total, Sherman has 495 tackles and 37 career interceptions.