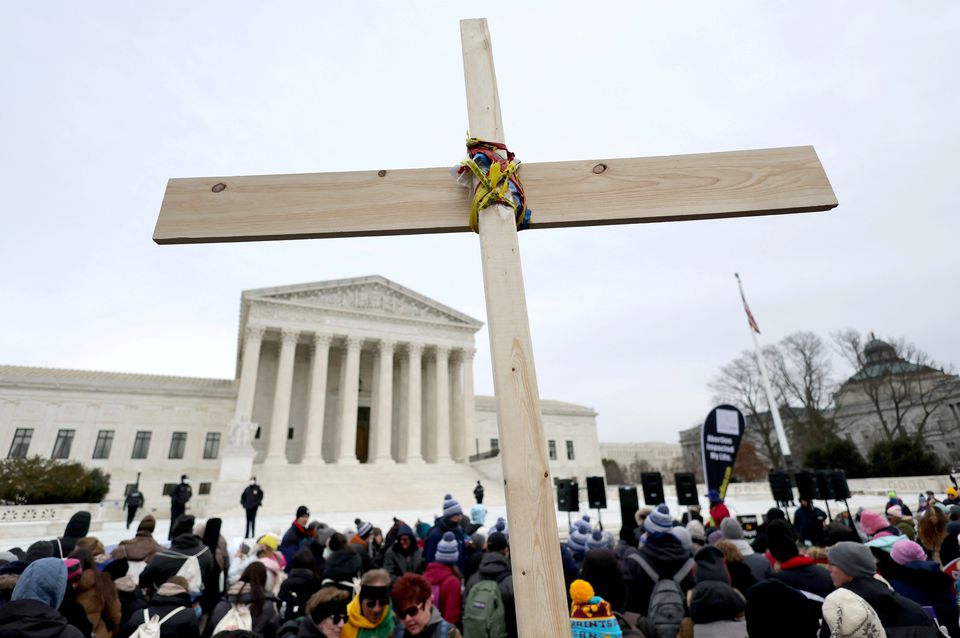 WASHINGTON, June 28 (Reuters) – The conservative-majority U.S. Supreme Court has chipped away at the wall separating church and state in a series of new rulings, eroding American legal traditions intended to prevent government officials from promoting any particular faith.

In three decisions in the past eight weeks, the court has ruled against government officials whose policies and actions were taken to avoid violating the U.S. Constitution’s First Amendment prohibition on governmental endorsement of religion – known as the “establishment clause.”

The court on Monday backed a Washington state public high school football coach who was suspended by a local school district for refusing to stop leading Christian prayers with players on the field after games.

On May 2, it ruled in favor of a Christian group that sought to fly a flag emblazoned with a cross at Boston city hall under a program aimed at promoting diversity and tolerance among the city’s different communities. read more

The court’s conservative justices, who hold a 6-3 majority, in particular have taken a broad view of religious rights. They also delivered a decision on Friday that was hailed by religious conservatives – overturning the 1973 Roe v. Wade ruling that legalized abortion nationwide – though that case did not involve the establishment clause.Advertisement · Scroll to continue

“They regard secularism, which for centuries has been the liberal world’s understanding of what it means to be neutral, as itself a form of discrimination against religion,” Dorf said of the conservative justices.

In Monday’s ruling, conservative Justice Neil Gorsuch wrote that the court’s aim was to prevent public officials from being hostile to religion as they navigate the establishment clause. Gorsuch said that “in no world may a government entity’s concerns about phantom violations justify actual violations of an individuals First Amendment rights.” read more

It was President Thomas Jefferson who famously said in an 1802 letter that the establishment clause should represent a “wall of separation” between church and state. The provision prevents the government from establishing a state religion and prohibits it from favoring one faith over another.

In the three recent rulings, the court decided that government actions intended to maintain a separation of church and state had instead infringed separate rights to free speech or the free exercise of religion also protected by the First Amendment.

But, as liberal Justice Sonia Sotomayor wrote in the Maine case, such an approach “leads us to a place where separation of church and state becomes a constitutional violation.”

Opinions vary over to how much flexibility government officials have in allowing religious expression, whether by public employees, on public land or by people during an official proceeding. Those who favor a strict separation of church and state are concerned that landmark Supreme Court precedents, including a 1962 ruling that prohibited prayer in public schools, could be imperiled.

“It’s a whole new door that (the court) has opened to what teachers, coaches and government employees can do when it comes to proselytizing to children,” said Nick Little, legal director for the Center for Inquiry, a group promoting secularism and science.

Lori Windham, a lawyer with the religious liberty legal group Becket, said the court’s decisions will allow for greater religious expression by individuals without undermining the establishment clause.

“Separation of church and state continues in a way that protects church and state. It stops the government from interfering with churches but it also protects diverse religious expression,” Windham added.

Most of the religious-rights rulings in recent years involved Christian plaintiffs. But the court also has backed followers of other religions including a Muslim woman in 2015 who was denied a retail sales job because she wore a head scarf for religious reasons and a Buddhist death row inmate in 2019 who wanted a spiritual adviser present at his execution in Texas.

The court also sided with both Christian and Jewish congregations in challenges based on religious rights to governmental restrictions such as limits on public gatherings imposed as public safety measures during the COVID-19 pandemic.

Nicole Stelle Garnett, a Notre Dame Law School professor who joined a brief filed with the justices backing the football coach, said the court was merely making clear that governments must treat religious people the same as everyone else.

Following Monday’s ruling, many issues relating to religious conduct in schools may be litigated anew under the court’s rationale that the conduct must be “coercive” in order to raise establishment clause concerns.

“Every classroom,” Garnett said, “is a courtroom.”