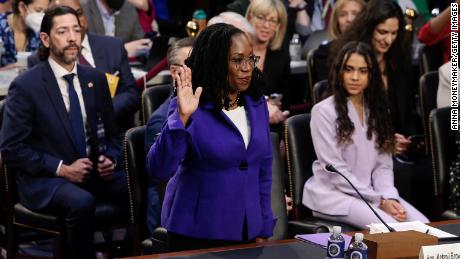 (CNN)President Joe Biden’s Supreme Court nominee, Ketanji Brown Jackson, defended her judicial record Tuesday as she faced intense questioning from Republican senators during the second day of her historic confirmation hearings.The hearings kicked off on Monday with opening statements from senators on the panel and the nominee. Two days of questioning — expected to be the most contentious part of the public vetting process on Capitol Hill — got underway Tuesday morning and will continue through Wednesday.Democrats have so far used the hearings to praise Brown — who would be the first Black woman to serve as a Supreme Court justice — as an exceptionally qualified, trail-blazing nominee whose depth and breadth of experience, including as a federal public defender, would add a valuable and unique perspective to the bench.In contrast, Republicans have attempted to portray her as weak on crime by zeroing in on some of her past defense work as well as by broadly attempting to connect her to criminal justice policies they argue have fueled a rise in crime. Republicans have raised questions over what constitutes Jackson’s judicial philosophy as they warn against activism, and prescribing policy outcomes, from the bench. And they have also criticized support for the nomination from left-wing groups.Jackson had a chance on Monday to formally introduce herself as she spoke about her family history and gratitude over the nomination. Tuesday’s hearing gave her a chance to respond to the pointed questions, and critiques, outlined by Republican senators.

READ: Ketanji Brown Jackson’s opening statement at her Supreme Court confirmation hearingOn Tuesday, senators may ask questions of the nominee for 30 minutes each, according to the schedule outlined by the committee. There are 11 Democrats and 11 Republicans on the panel and the questioning is likely to stretch late into the evening.On Wednesday, lawmakers will be allowed 20 minutes each for a second round of questioning.

Jackson said on Tuesday that she approaches her work in such a way so as to ensure impartiality and does not impose personal opinions or policy preferences, an assertion that comes as Republican senators have expressed concerns over judicial activism.”I have developed a methodology that I use in order to ensure that I am ruling impartially and that I am adhering to the limits on my judicial authority,” Jackson said.”When I get a case, I ensure that I am proceeding from a position of neutrality,” she said.”I am not importing my personal views or policy preferences,” she added.

As a public defender, Jackson represented a Guantanamo Bay detainee, though it’s her advocacy for detainees while she worked at a private firm that Republicans are particularly skeptical of. The advocacy came in the form of amici briefs, penned while an attorney at the firm Morrison & Foerster, supporting detainees in cases before the Supreme Court.Jackson called the September 11, 2001, terrorist attacks, “a tragic attack on this country” and paid tribute to military service members.”After 9/11, there were also lawyers who recognized that our nation’s values were under attack. That we couldn’t let the terrorists win by changing who we were fundamentally.””What that meant was that the people who were being accused by our government of having engaged in actions related to this, under our constitutional scheme, were entitled to representation, were entitled to be treated fairly. That’s what makes our system the best in the world,” she said.Describing her work as a public defender, Jackson said, “I was in the federal public defender’s office right after the Supreme Court decided that individuals who were detained at Guantanamo Bay by the President could seek review of their detention.”She added, “Federal public defenders don’t get to pick their clients. They have to represent whoever comes in and it’s a service. That’s what you do as a federal public defender, you are standing up for the constitutional value of representation.”

As the Senate vets the nomination, Republican Sen. Josh Hawley of Missouri has raised concerns about Jackson’s record on sentencing in child pornography cases.Jackson forcefully rebutted the accusations on Tuesday and referred to the issue as a “sickening and egregious crime.””As a mother, and a judge who has had to deal with these cases, I was thinking that nothing could be further from the truth,” the nominee said when asked Senate Judiciary Chairman Dick Durbin, an Illinois Democrat, to react to the charges.An in-depth CNN review of the material in question shows that Jackson has mostly followed the common judicial sentencing practices in these kinds of cases. It has become a norm among judges to issue sentences below the guidelines in certain child pornography cases that don’t involve producing the pornography itself.A group of retired federal judges — including two Republican appointees — told the Senate Judiciary Committee on Monday night that Jackson’s record on child pornography sentencing is “entirely consistent” with the records of other judges across the country.The White House and Senate Democrats have also refuted the criticisms in defense of Jackson.”In the vast majority of cases involving child sex crimes, the sentences Judge Jackson imposed were consistent with or above what the government or US probation recommended,” White House press secretary Jen Psaki said last week.

Court packing and other key issues

Republican senators have attempted to pin Jackson down on the hot-button issue of expanding the number of Supreme Court justices who sit on the bench, also known as court packing, an idea that has gained currency among progressive elements of the Democratic Party.On Tuesday, Jackson argued that it was not in her purview to weigh in on a politically sensitive topic.”In my view, judges should not be speaking to political issues, and certainly not a nominee for a position on the Supreme Court,” she said in response to a question on the issue.

What’s next after confirmation hearings conclude

Democrats can confirm Jackson to the high court on the strength of their narrow Senate majority, with 50 votes and Vice President Kamala Harris breaking a tie. The party does not need any Republican support for successful confirmation, but if any Republicans do vote to confirm, it would give the White House a chance to tout a bipartisan confirmation.It’s not yet clear, however, whether Jackson will receive any votes from Republicans.When the Senate voted to confirm her last year to fill a vacancy on a powerful DC-based appellate court, three Republican senators voted with Democrats in favor: Lindsey Graham of South Carolina, Susan Collins of Maine and Lisa Murkowski of Alaska