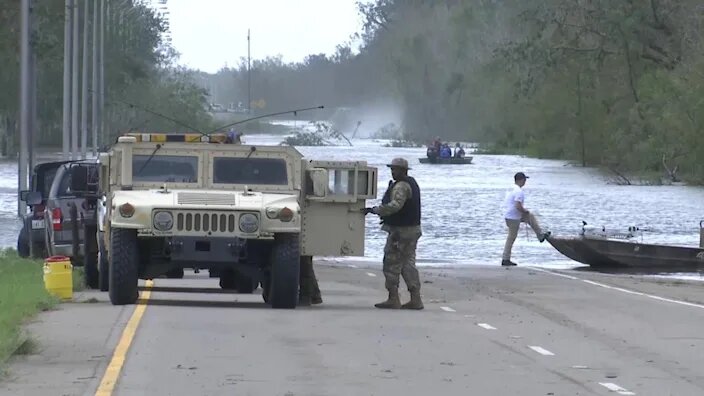 More than a million people are still without power in Louisiana and Mississippi after Hurricane Ida hit the Gulf Coast over the weekend. And more than 750 people are helping with search and rescue efforts — with the extent of the damage still being uncovered.

Ida shredded rooftops and scattered debris in the coastal community of Grand Isle. On Monday, Coast Guard aircraft circled the island, looking for survivors as first responders across Louisiana did the same – reaching those still trapped in Ida’s aftermath.

“We’re still in a search and rescue mode,” Governor John Bel Edwards said. “We’re not recovering yet. We’re still responding and trying to save lives.”

In LaPlace, rescue crews went door to door, searching for families stranded by floodwaters. Some took refuge on second floors or in their attics.

“The ceiling in every room caved in and it was– it was unbelievable,” resident Debbie Greco said. “Four feet of water just came rushing in.”

Storm surge swallowed a neighborhood in Plaquemines Parish, after the nearby levee failed.

Cell phone video captured the evacuation efforts at a Louisiana hospital Monday, as EMS crews prepared to transfer about 100 patients from a damaged facility.

Inside one transfer vehicle, people were stacked three rows high all the way to the back of the trailer.

“CBS This Morning” lead national correspondent David Begnaud reported more than 25,000 linemen are out across the state, racing to restore power. Drone video showed a toppled transmission tower blown over by Ida on Sunday, its powerlines laying across the Mississippi River.

But how do you tell people they have to wait when they need help now? Like 70-year-old Theophilus Charles.

“Everything in here’s messed up,” Charles said.

Ida ripped apart his home, one he says was built by his grandmother. And now he has nowhere to go.

“I figured I could stay here, you know, and ride this one out,” Charles said. “But I couldn’t, you know? Things just started falling apart, blowing away on me. I ain’t got a dry spot in the house. Right now, I got nothing.”