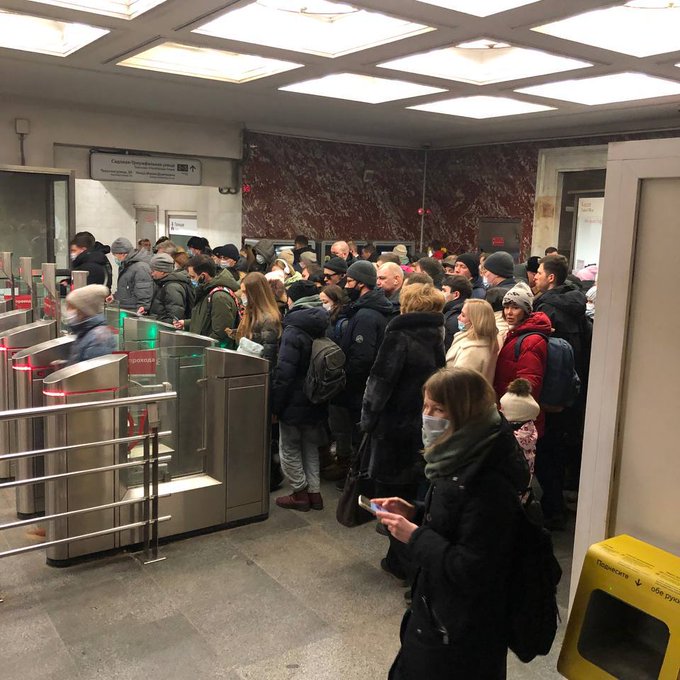 The crippling sanctions imposed on Russia for its invasion of Ukraine are already wreaking havoc on the lives of ordinary Russians, who can only expect things to worsen in the days and weeks ahead, experts say.

The measures announced by the U.S. and its allies over the weekend include targeting the ability of Russia’s central bank to support the country’s currency, the ruble, which fell about 30% against the U.S. dollar on Monday to less than 1 cent. It regained some ground after Russia’s central bank more than doubled its key interest rate to 20% to shore up the currency.

The developments had Russians facing the prospect of higher prices and curtailed foreign travel as the ruble’s plunge had nervous depositors flocking to banks and ATMs. Posts on social media relayed reports of long lines and machines running out of cash.

Bank run accelerates in #Moscow after Putin imposed crippling capital controls last night to protect a collapsing economy. This is Svetnoi Boulevard in the heart of Moscow. pic.twitter.com/LgaclQzaPB

Moscow’s department of public transportation warned residents of the city during the weekend they might have trouble using Apple Pay, Google Pay and Samsung Pay to cover fares because VTB, the Russian bank that handles the transactions, was among the entities hit by international sanctions.

Apple Pay and Google Pay no longer work on Moscow's metro system, leading to long queues as people fumble about for cash pic.twitter.com/ezaLZneKiJ

With flights blocked, entrepreneur Vladimir Vyaselov told the Associated Press that he was considering driving to another country to catch a flight overseas on his student visa. “I have been in disagreement with the decisions of all the authorities for a very long time and that is why I store all my money only in currencies, and I am skeptical towards Sberbank, VTB, to national banks in general,” he said. “I can’t say I was ready [for sanctions] but I was as ready as possible being a citizen of the Russian Federation.”

At least half of Russia’s estimated $640 billion hard currency stockpile is now frozen, according to European officials.

This is the planned departures from Moscow SVO 🇷🇺 airport tomorrow. A city in deepening isolation. A tragedy for which one person is solely responsible. pic.twitter.com/h5uxpRf90K

Russia’s central bank on Monday hiked its key interest rate to 20% from 9.5% in a last-ditch effort to stem a run on banks. That means Russian homeowners with mortgages or business owners who’ve taken out loans could get socked by the doubling in rates, analysts say.

Russians will see their standard of living drop as the price of imported goods including iPhones soar.

“Before the weekend, signs emerged that the war in Ukraine was causing panic among Russian households and businesses. Russians queued at bank branches and cash machines were emptied as people tried to exchange their roubles for foreign currencies,” Tatiana Orlova, an analyst at Oxford Economics, wrote in a Monday note to clients. “There were local reports of people buying white goods [such as stoves and other large home appliances] to turn their cheapening roubles into something with tangible value.”

“It’s going to ripple through their economy really fast,” David Feldman, an economics professor at William & Mary in Virginia told the Associated Press. “Anything that is imported is going to see the local cost in currency surge. The only way to stop it will be heavy subsidization.”

The wide-ranging sanctions imposed on Russia by the U.S. and its allies is akin to “an economic siege, and I don’t think the Russian economy can stand it,” Weinberg said.

“Western democracies have surprised many by pursuing a strategy of exerting intense economic pressure on Russia through effectively cutting it off from global financial markets,” Oliver Allen, markets economist with Capital Economics, told investors in a research note. “If Russia continues on its current path, it is quite easy to see how the latest sanctions could be just the first steps in a severe and enduring severing of Russia’s financial and economic ties with the rest of the world.”

Russia has made strides in producing many goods domestically, including most of its food, to protect its economy from sanctions, Tyler Kustra, an assistant professor of politics and international relations at the University of Nottingham, told the AP.  Still, for example, fruits that can’t be grown in Russia are going to be “suddenly much more expensive,” he noted.

The auto sector, a major employer, is “being hit very quickly with the ban on the import of microchips and other parts,” said Chris Weafer, chief executive of Macro-Advisory, a Eurasia strategic advisory company.

Weinberg said he’s “relieved” that China is not trying to neutralize the damage being inflicted on Russia, which the economist said could be accomplished by Russia selling all its exports to Beijing.

“The People’s Bank of China could be a lifeline to the ruble and the Russian economy,” Weinberg said of Beijing’s central bank, quipping, “China fails the ‘besties’ test by a wide margin.”

The PBC would run the risk of sanctions if it purchases gold from Russia, the economist noted. “China is not prepared to form a separate monetary system with Russia right now, which is what they would have to do,” Weinberg stated.

“Even though China could blow up our economy, I don’t think it’s in China’s interest to blow up the world economy.”

— The Associated Press contributed to this report.