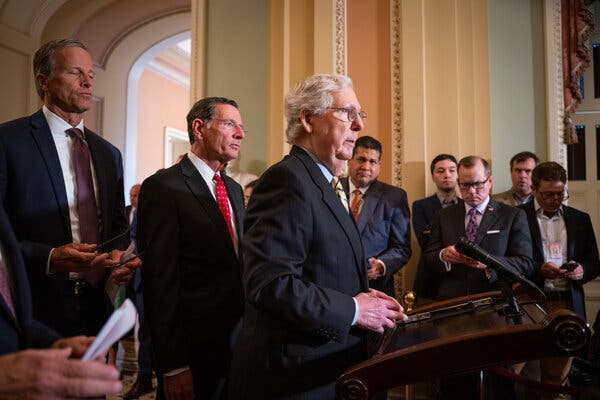 WASHINGTON — Republicans on Tuesday blocked the most ambitious voting rights legislation to come before Congress in a generation, dealing a blow to Democrats’ attempts to counter a wave of state-level ballot restrictions and supercharging a campaign to end the legislative filibuster.

President Biden and Democratic leaders said the defeat was only the beginning of their drive to steer federal voting rights legislation into law, and vowed to redouble their efforts in the weeks ahead.

“In the fight for voting rights, this vote was the starting gun, not the finish line,” said Senator Chuck Schumer, Democrat of New York and the majority leader. “We will not let it go. We will not let it die. This voter suppression cannot stand.”

But the Republican blockade in the Senate left Democrats without a clear path forward, and without a means to beat back the restrictive voting laws racing through Republican-led states. For now, it will largely be left to the Justice Department to decide whether to challenge any of the state laws in court — a time-consuming process with limited chances of success — and to a coalition of outside groups to help voters navigate the shifting rules.

Democrats’ best remaining hope to enact legal changes rests on a long-shot bid to eliminate the legislative filibuster, which Republicans used on Tuesday to block the measure, called the For the People Act. Seething progressive activists pointed to the Republicans’ refusal to even allow debate on the issue as a glaring example of why Democrats in the Senate must move to eliminate the rule and bypass the G.O.P. on a range of liberal priorities while they still control Congress and the presidency.

They argued that with former President Donald J. Trump continuing to press the false claim that the election was stolen from him — a narrative that many Republicans have perpetuated as they have pushed for new voting restrictions — Democrats in Congress could not afford to allow the voting bill to languish.

“The people did not give Democrats the House, Senate and White House to compromise with insurrectionists,” Representative Ayanna Pressley, Democrat of Massachusetts, wrote on Twitter. “Abolish the filibuster so we can do the people’s work.”

Liberal activists promised a well-funded summertime blitz, replete with home-state rallies and million-dollar ad campaigns, to try to ramp up pressure on a handful of Senate Democrats opposed to changing the rules. Mounting frustration with Republicans could accelerate a growing rift between liberals and more moderate lawmakers over whether to try to pass a bipartisan infrastructure and jobs package or move unilaterally on a far more ambitious plan.

But key Democratic moderates who have defended the filibuster rule — led by Senators Joe Manchin III of West Virginia and Kyrsten Sinema of Arizona — appeared unmoved and said their leaders should try to find narrower compromises, including on voting and infrastructure bills.

Ms. Sinema dug in against eliminating the filibuster on the eve of the vote, writing an op-ed in The Washington Post defending the 60-vote threshold. Without the rule there to force broad consensus, she argued, Congress could swing wildly every two years between enacting and then reversing liberal and conservative agenda items.

“The filibuster is needed to protect democracy, I can tell you that,” Mr. Manchin told reporters on Tuesday.

In their defeat, top Democrats appeared keen to at least claim Republicans’ unwillingness to take up the bill as a political issue. They planned to use it in the weeks and months ahead to stoke enthusiasm with their progressive base by highlighting congressional Republicans’ refusal to act to preserve voting rights at a time when their colleagues around the country are racing to clamp down on ballot access.

“Once again, Senate Republicans have signed their names in the ledger of history alongside Donald Trump, the big lie and voter suppression — to their enduring disgrace,” Mr. Schumer said. “This vote, I’m ashamed to say, is further evidence that voter suppression has become part of the official platform of the Republican Party.”

Democrats’ bill, which passed the House in March, would have ushered in the largest federally mandated expansion of voting rights since the 1960s, ended the practice of partisan gerrymandering of congressional districts, forced super PACs to disclose their big donors and created a new public campaign financing system.

It would have pushed back against more than a dozen Republican-led states that have enacted laws that experts say will make it harder for people of color and young people to vote, or shift power over elections to G.O.P. legislators. Other states appear poised to follow suit, including Texas, whose Republican governor on Tuesday called a special legislative session in July, when lawmakers are expected to complete work on a voting bill Democrats temporarily blocked last month.

After months of partisan wrangling over the role of the federal government in elections, the outcome on Tuesday was hardly a surprise to either party. All 50 Senate Democrats voted to advance the federal legislation and open debate on other competing voting bills. All 50 Republicans united to deny it the 60 votes needed to overcome the filibuster, deriding it as a bloated federal overreach.

Republicans never seriously considered the legislation, or a narrower alternative proposed in recent days by Mr. Manchin. They mounted an aggressive campaign in congressional committees, on television and finally on the floor to portray the bill as a self-serving federalization of elections to benefit Democrats. They called Democrats’ warnings about democracy hyperbolic. And they defended their state counterparts, including arguments that the laws were needed to address nonexistent “election integrity” issues Mr. Trump raised about the 2020 election.

“These same rotten proposals have sometimes been called a massive overhaul for a broken democracy, sometimes just a modest package of tweaks for a democracy that’s working perfectly and sometimes a response to state actions, which this bill actually predates by many years,” said Senator Mitch McConnell, Republican of Kentucky and the minority leader. “But whatever label Democrats slap on the bill, the substance remains the same.”

His top deputy, Senator John Thune of South Dakota, also threw cold water on any suggestion the two parties could come together on a narrower voting bill as long as Democrats wanted Congress to overpower the states.

“I don’t think there’s anything I’ve seen yet that doesn’t fundamentally change the way states conduct elections,” he said. “It’s sort of a line in the sand for most of our members.”

At more than 800 pages, the For the People Act was remarkably broad. It was first assembled in 2019 as a compendium of long-sought liberal election changes and campaign pledges that had energized Democrats’ anti-corruption campaign platform in the 2018 midterm elections. At the time, Democrats did not control the Senate or the White House, and so the bill served more as a statement of values than a viable piece of legislation.

The Battle Over Voting Rights

After former President Donald J. Trump returned in recent months to making false claims that the 2020 election was stolen from him, Republican lawmakers in many states have marched ahead to pass laws making it harder to vote and change how elections are run, frustrating Democrats and even some election officials in their own party.

When Democrats improbably won control of them, proponents insisted that what had essentially been a messaging bill become a top legislative priority. But the approach was always flawed. Mr. Manchin did not support the legislation, and other Democrats privately expressed concerns over key provisions. State election administrators from both parties said some of its mandates were simply unworkable (Democrats proposed tweaks to alleviate their concerns). Republicans felt little pressure to back a bill of its size and partisan origins.

Democratic leaders won Mr. Manchin’s vote on Tuesday by agreeing to consider a narrower compromise proposal he drafted in case the debate had proceeded. Mr. Manchin’s alternative would have expanded early and mail-in voting, made Election Day a federal holiday, and imposed new campaign and government ethics rules. But it cut out proposals slammed by Republicans, including one that would have neutered state voter identification laws popular with voters and another to set up a public campaign financing system.

Mr. Manchin was not the only Democrat keen on Tuesday to project a sense of optimism and purpose, even as the party’s options dwindled. Senator Amy Klobuchar, Democrat of Minnesota, announced she would use her gavel on the Rules Committee to hold a series of hearings on election issues, including a field hearing in Georgia to highlight the state’s restrictive new voting law.

Vice President Kamala Harris, who asked to take the lead on voting issues for Mr. Biden, spent the afternoon on Capitol Hill trying to drum up support for the bill and craft some areas of bipartisan compromise. She later presided over the vote.

“The fight is not over,” she told reporters afterward.

Facing criticism from party activists who accused him of taking too passive a role on the issue, Mr. Biden said he would have more to say on the issue next week but vowed to fight on against the dawning of a “Jim Crow era in the 21st century.”

“I’ve been engaged in this work my whole career, and we are going to be ramping up our efforts to overcome again — for the people, for our very democracy,” he said in a statement.

But privately, top Democrats in Congress conceded they had few compelling options and dwindling time to act — particularly if they cannot persuade all 50 of their members to scrap the filibuster rule. The Senate will leave later this week for a two-week break. When senators return, Democratic leaders, including Mr. Biden, are eager to quickly shift to consideration of an infrastructure and jobs package that could easily consume the rest of the summer.

They have also been advised by Democratic elections lawyers that unless a voting overhaul is signed into law by Labor Day, it stands little chance of taking effect before the 2022 midterm elections.

Both the House and the Senate are still expected to vote this fall on another marquee voting bill, the John Lewis Voting Rights Advancement Act. The bill would put teeth back into a key provision of the Voting Rights Act of 1965 that made it harder for jurisdictions with a history of discrimination to enact voting restrictions, which was invalidated by the Supreme Court in 2013. While it does have some modest Republican support, it too appears to be likely doomed by the filibuster.

“This place can always make you despondent,” said Senator Christopher S. Murphy, Democrat of Connecticut. “The whole exercise of being a member of this body is convincing yourself to get up another day to convince yourself that the fight is worth engaging in. But yeah, this certainly feels like an existential fight.”