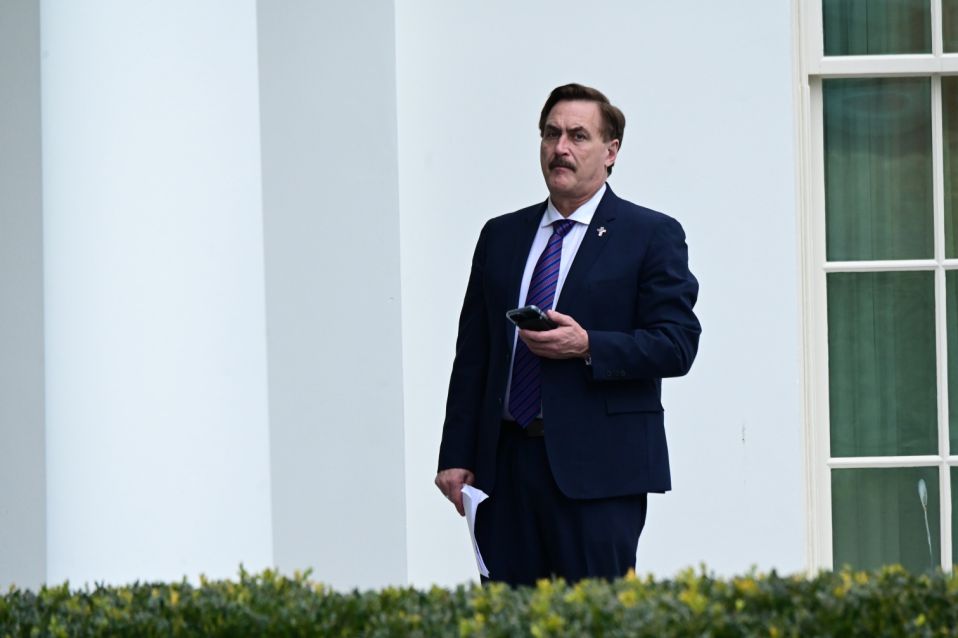 MyPillow CEO Mike Lindell appeared on Newsmax Tuesday afternoon for an interview about being kicked off Twitter. What followed, to paraphrase the tagline for Lindell’s company, cannot be advertised as the “most comfortable” interview you’ll ever watch.

Lindell, a self-made entrepreneur who has managed to position himself as a surrogate for former President Donald Trump’s attempts to overthrow the results of the election, hijacked the interview on the upstart conservative network to push his debunked conspiracy theories about the Dominion voting machines used in a number of states. Asked Tuesday about Twitter canceling his account, he began his answer:

“Well, first mine was taken down because we have all the election problem with these Dominion machines, we have 100 percent proof and then I, when they took it down—”

He was interrupted by Newsmax host Bob Sellers, who appeared to be reading from a prepared statement disavowing Lindell’s claims.

“Mike? Mike? Mike, thank you very much. Mike, Mike, you’re talking about machines that we at Newsmax have not been able to verify any of those kinds of allegations,” Sellers said as Lindell continued to make his case. “We just want to let people know that there’s nothing substantive that we’ve seen, and let me read you something there — while there [was] some clear evidence of some cases of vote fraud and election irregularities, the election results in every state were certified, and Newsmax accepts the results as legal and final. The courts have also supported that view.”

Dominion has mounted an aggressive legal defense against the bogus claims that its machines were rigged to favor President Biden, including filing a $1.3 billion defamation suit against Trump lawyer Rudy Giuliani. Faced with the company’s demands and threats of litigation, right-wing media outlets and personalities, including Fox Business host Lou Dobbs, have broadcast segments that acknowledged the lack of evidence for those accusations. Sellers moved quickly to shut down Lindell’s fraud claims.

For the next two minutes, Lindell and Sellers attempted to shout each other down. Lindell pushed on with his claims, saying, “You have just suppressed me!” as Sellers continued to speak over him.

“We don’t want to relitigate the, uh, allegations that you’re making, Mike,” Sellers said, before trying to return to the subject of Lindell and his company being removed from Twitter. “Do you think this should be temporary because it appears to be permanent? Could you make an argument that it is temporary?”

“What? No, I wanted it to be a permanent because you know what?” Lindell said. “The agenda is because I am reviewing all the evidence on Friday of all the election fraud with these machines. So I’m sorry if you think it’s not—”

At that point Sellers interrupted again. “Can I ask our producers, can we get out of here please? I don’t want to have to keep going over this.”

A few seconds later, Sellers stood up and walked off the set.

Since the Nov. 3 election, Lindell has passionately promoted the baseless claim that Trump actually defeated Biden.

In a Jan. 15 meeting with the then-president in the Oval Office, Lindell showed up with charts and notes that suggested Trump might declare “martial law if necessary” in order to remain in office. He also suggested to the president that there was evidence that he had discovered online that China had interfered in the U.S. election.

“I said: ‘Mr. President, I have great news. You won with 79 million votes, and Biden had 68 million,” Lindell later recalled of the meeting.

Citing Lindell’s unhinged theories about the election, retailers like Bed Bath & Beyond and Kohl’s have stopped selling MyPillow.