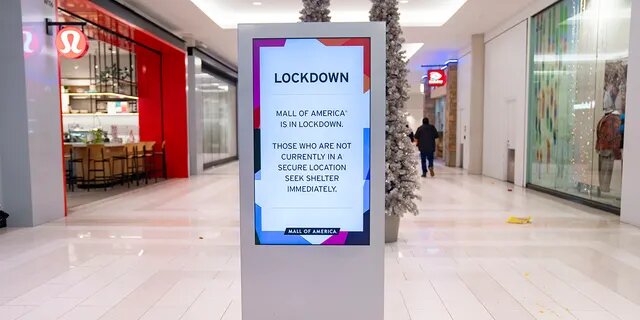 Minnesota police arrested five people in connection with a shooting at the Mall of America on Friday night that left one person dead and another grazed.

The shooting happened just before 8 p.m. Friday and the victim who died is being described as a 19-year-old African American male. A female’s clothing was grazed by a bullet, according to FOX 9.

Five people were involved in an altercation which lead to one of the individuals firing a gun at the 19-year-old several times. The 19-year-old man was pronounced dead at the scene after first responders attempted to save him.

An officer stands inside Nordstrom at Mall of America after a shooting, Friday, Dec. 23, 2022, in Bloomington, Minnesota. (AP Photo/Abbie Parr)

Police quickly arrived to the scene after receiving reports of the shooting, and the Mall of America was placed on lockdown, which was later lifted.

Officials lock down the west wing of the Mall of America after a shooting was reported Friday, Dec. 23, 2022, in Bloomington, Minnesota. (Alex Kormann/Star Tribune via AP)

On Saturday, a Bloomington Police Department SWAT team conducted a raid at 8:40 a.m. at a house in the city and arrested five people. Two 18-year-old men and three 17-year-old boys were arrested on suspicion of second-degree murder.

Signs around the Mall of America indicate that a lockdown is in progress after a shooting was reported Friday, Dec. 23, 2022, in Bloomington, Minnesota. (Alex Kormann/Star Tribune via AP)

“I’m fairly confident we do have the person responsible for murdering the victim in custody,” Hodges said.

While Hodges said that a motive hasn’t been determined, police believe that the shooting might have been related to a “long-standing feud” between two groups.