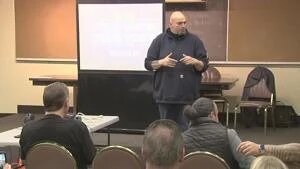 It’s being called one of the nation’s most important Senate contests.

“Today I called Mehmet Oz to congratulate him on his victory,” McCormick said.

McCormick acknowledged that a statewide recount wouldn’t give him enough votes to make up the deficit against Oz.

“I will do my part to try to unite Republicans and Pennsylvanians behind his candidacy and behind his nomination for the Senate,” McCormick said.

Now, Oz will go on to face Democrat John Fetterman in the general election.

Fetterman is currently in recovery after having a stroke in the days leading up to primary election day last month. He released a statement Friday with an update on where he’s at with his health, and how he ended up in this position.

Fetterman acknowledged that he found out he had a heart condition back in 2017 when he went to the hospital with swollen feet. But he didn’t follow up.

Fetterman’s statement reads, in part: “I should have taken my health more seriously. The stroke I suffered on May 13 didn’t come out of nowhere. I almost died, and I didn’t do what the doctor told me.”

Fetterman called his stroke “completely preventable,” saying if he had continued taking blood thinners, it never would have happened.

The Democratic candidate added that he’s not at 100% yet but asks for voters to bear with him as he continues his recovery.

He will face Dr. Oz this November.

Fetterman also added that he realizes how important the race is, not only for Pennsylvania but for the country as a whole.