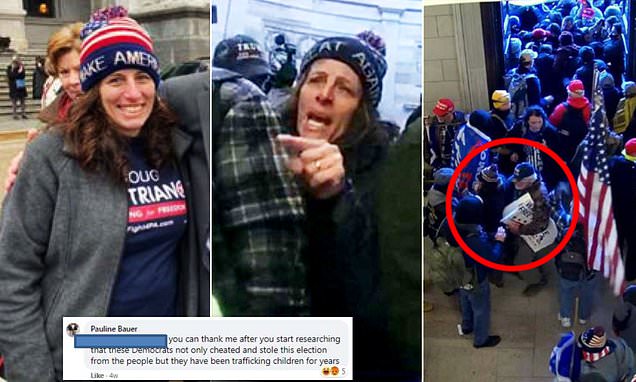 A court hearing for MAGA rioter Pauline Bauer went off the rails on Monday after she began yelling at the judge while declaring herself a “sovereign citizen.

NBC 4 Washington’s Scott MacFarlane reports that Bauer, who infamously called for the hanging of House Speaker Nancy Pelosi (D-CA) during the Capitol riots, immediately went off the deep end by telling the judge that she is not subject to American laws.

According to MacFarlane, Bauer during her court hearing repeatedly interrupted the judge while also demanding that the court recognize her own personal judicial authority.

“Every man is independent of all laws, except those of nature,” declared Bauer, who decided to represent herself in court.

The judge at one point asked Bauer if she wanted to reconsider her decision to forgo legal representation by professional legal counsel, and she again declared that the court had no authority over her.

According to MacFarlane, the hearing got even crazier from there.

“This case… is going off-the-rails,” he reported on Twitter. “January 6 defendant Pauline Bauer says she won’t let pre-trial services come into her home, won’t turn over her passport, calls the search of her home ‘illegal” — and refuses to let judge move forward and get her a lawyer. Ugly.”

Bauer first gave hints of her purported “sovereign citizen” status when she filed a bizarre motion to dismiss her case in which she described herself as “I, Me, Pauline Bauer the Living Soul, A Creation of God.”

The filing went on to demand that the court “drop all Charges against my VESSEL – PAULINE BAUER and Dismiss the Case.”

Bauer has been charged with multiple counts of violent entry, disruptive conduct, and obstruction of Congress for her role in the deadly January 6th Capitol riots, in which she was heard yelling, “bring Nancy Pelosi out here now… we want to hang that f*cking b*tch.”