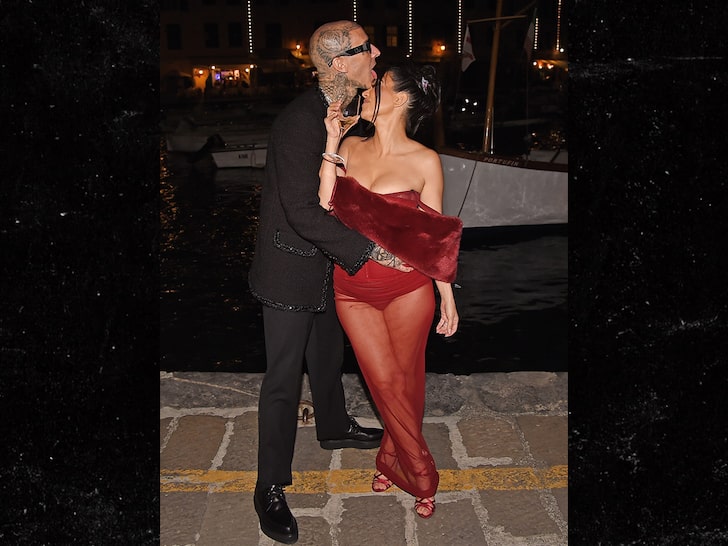 Kourtney Kardashian and Travis Barker are living it up in Portofino, Italy, ahead of their ceremonial wedding, aka wedding ceremony #3!

The already-married couple couldn’t keep their hands off each other — or their tongues — as they strolled the streets of the scenic city.

Kourt and Trav took her son Reign for a stroll Saturday morning, ahead of the nuptials which appear to be going down this weekend at an amazing castle … probably Saturday night.

Kim Kardashian showed up legally blonde and her daughter North was right there, along for the ride.

Lest we forget Kylie Jenner and Khloe Kardashian … Kylie is on mommy duty as she holds on tight to daughter Stormi as they jump on a boat with the rest of the fam.

They’re yachting it over there — on a $60M boat — as Kendall and most of the brood celebrate onboard.

As we reported, Scott Disick was not invited to the ceremony and so far we haven’t seen any sign of Rob.

Wedding #3 won’t sufficiently do it. We’re told there’ll be another shindig — a BIG one — once they all return to the States. It’ll be for friends and fam. The question — will Scott be invited and if so will he show?

THE FAM’S ALL HERE!LAUNCH GALLERY

It’s interesting … Kourtney and Travis are settling into Travis’s home rather than buying a new one.  There is, however, a Kourtney connection to Travis’s house. She was super involved in decorating it. The 2 were friends long before they hooked up, and Kourtney was more than willing back then to lend a helping hand, and the results are pretty spectacular.