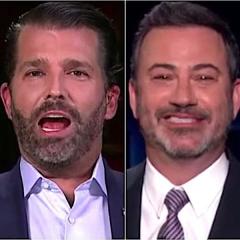 Jimmy Kimmel tore into Donald Trump Jr. for his clueless use of a single word during a recent appearance on right-wing TV, where he made a weird reference to President Joe Biden “sniffing children.”

Kimmel was left in disbelief by the word choice from the “fraudigal son” of former President Donald Trump, who has denied using cocaine.

“Sniffing. Sniffing children,” he repeated on Tuesday’s “Jimmy Kimmel Live.” “We want to know what you are sniffing. That’s what we would like to know. If I was you, Donnie, I would stuff the word ‘sniffing’ back into the family thesaurus.”

When Trump Jr. claimed Biden was off to the “most disastrous” start in the history of the U.S. presidency, Kimmel offered up a challenge.

See the full takedown in his monologue: