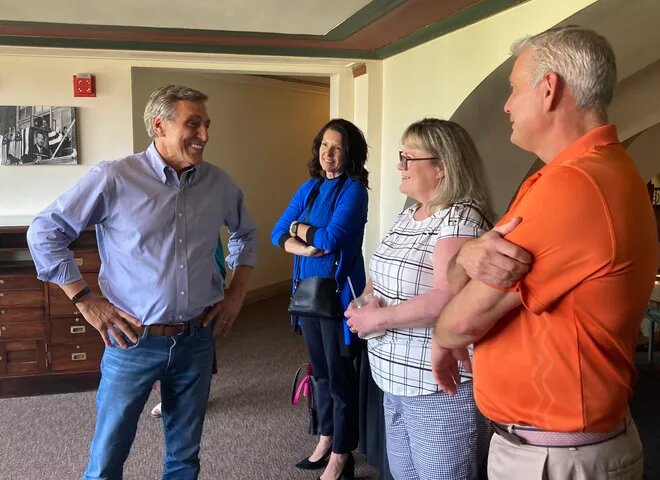 His name already ink-dried on Tuesday’s primary ballot, state Senate President Pro Tempore Jake Corman ended his run for governor Thursday and threw his support behind former Congressman Lou Barletta in an effort to elect a Republican “who can beat” the Democratic nominee in November.

“I called Lou yesterday and told him it was his last chance to get out of the race and support me,” Corman joked in a press conference with Barletta Thursday morning in Harrisburg. “It didn’t quite go that way. But since I got in this race seven months ago, the overriding discussion was the Republican Party has a lot of good candidates, but we need to coalesce around one candidate and over time, obviously, that hasn’t happened.”

The announcement comes as Republican leaders across the state have reportedly worried that the frontrunner for the party’s nomination, state Sen. Doug Mastriano, would face electability issues in a general election matchup against the presumptive Democratic nominee, Attorney General Josh Shapiro.

Barletta thanked Corman, saying the endorsement was “probably a difficult decision to make.”

“It is increasingly evident that it is important for Republicans to get behind one candidate who can win the nomination and then actually beat Josh Shapiro in November,” Barletta said.

Corman, who was set to withdraw last month until former President Donald Trump urged him to stay in the race, asked his supporters and the other Republican candidates to follow his lead, noting that the party has lost four of the last five gubernatorial races. He likened the move to Democratic presidential candidates exiting the 2020 primary in mass to back then-candidate Joe Biden.

“It’s my job to show leadership when it matters,” Corman said. “And so today I think, putting the party first, it’s time for me to step aside and support someone who can win in the fall. I think the amazing thing about Lou’s campaign is he’s consistently been towards the top of the polls in this race, despite spending far less money than other candidates.”

Politico and The Philadelphia Inquirer reported this week that Republican leaders in the Keystone state are “plotting an 11th-hour plan,” as The Inquirer put it, to prevent Mastriano, who has pushed bogus election fraud conspiracies, from capturing the party’s nomination out of fear that Mastriano would struggle in the general election against Shapiro.

Two recent polls by Fox News and the Trafalgar Group put Mastriano up by double digits over Barletta, but an internal Republican poll that’s been tweeted out by some prominent Republicans, such as Matt Brouillette, the president of Commonwealth Partners Chamber of Entrepreneurs, which has endorsed McSwain, shows Mastriano trailing Shapiro 49% to 41%, despite respondents favoring a generic Republican over a Democrat, 42% to 39%.

“A vote for Doug in May is a vote for Josh in November,” Brouilette tweeted.

The recent polls have shown Mastriano breaking away from the other eight Republicans in the race, with Barletta running second followed by White and former U.S. Attorney Bill McSwain.

Corman polled a distant fifth place, garnering 5% support in a poll conducted May 3-7 by Fox News. He also failed to qualify for a recent debate that featured the four frontrunners.

But the Fox News poll also showed that 15% of likely Republican voters remained undecided heading into the nominating contest and that Mastriano, though leading, was doing so with under 30% support.Your stories live here.Fuel your hometown passion and plug into the stories that define it.Create Account

Barletta told reporters that the publicized efforts to prevent a Mastriano nomination aren’t personal, for him at least, and that he has not spoken poorly about any of his fellow Republican rivals during the primary.

Barletta also rejected the idea, when asked by reporters, if the move could backfire and allow Mastriano to build on the narrative of being a populist candidate who’s facing opposition from “career politicians.”

“I don’t think this feeds into anything other than I’m presenting to the people of Pennsylvania that I will give the Republicans the best chance in November,” Barletta said.

Both Corman and Barletta said they have not spoken to Trump about getting behind Barletta, who was one of the first members of Congress to back Trump’s 2016 presidential campaign. Trump does not appear likely to make an endorsement in the race.

“I did ask Jake to turn his phone off,” Barletta joked, referring to Trump urging Corman to stay in the race in early April when Corman appeared ready to drop out.

Corman, whose Senate district includes State College, said the timing of his decision makes more sense now than it would have a month ago because so many voters remain undecided and many would have forgotten his endorsement by the primary.

Whether the four other GOP candidates lagging in the polls ― Joe Gale, Charlie Gerow, Melissa Hart and Nche Zama ― or the two other frontrunners, White and McSwain, follow Corman’s lead remains to be seen.

“I have not talked to any of the other candidates, and, again, that’s got to be a personal decision for themselves,” Barletta said. “But what I will present is that I have been first or second in every poll since the day I announced. There’s now five days left and I think each person needs to look at their campaign and where they want to go.”