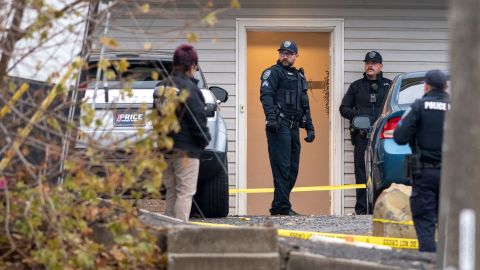 More questions than answers continue to plague the Moscow, Idaho, community after the fatal stabbing of four University of Idaho students – and police said they cannot assure the community is safe.

Moscow Police Chief James Fry gave an update Wednesday, saying two additional roommates were in the home at the time of the killings who were neither injured nor held hostage. Fry also said two of the victims – Ethan Chapin and Xana Kernodle – were at a party on campus, while the other two victims – Madison Mogen and Kaylee Goncalves – were at a downtown bar prior to their deaths.

All four arrived back home sometime after 1:45 a.m. local time, Fry said. They were killed “sometime in the early morning hours of Sunday, November 13,” Fry said.

Officers investigate Sunday at the scene of the quadruple homicide at a University of Idaho off-campus residence. Zach Wilkinson/The Moscow-Pullman Daily News/AP

But there were no calls to 911 until noon Sunday. Fry did not say who called 911, despite two people being at the home when the killing took place and when officers responded. Fry also declined to say if the two people spoke with police.

“We’re not going to go any further into what they know and what they don’t know,” he said.

He did say the call came in for an unconscious person, not a person with a stab wound.

There was also no evidence of forced entry, the chief said. Fry did admit all four victims were killed with a knife, though no weapon has been located at this time.

As of Wednesday evening, there is neither identity nor location of a suspect, Fry said.

“We cannot say there’s no threat to the community and as we have stated, please stay vigilant, report any suspicious activity and be aware of your surroundings at all times,” Fry said.

Fry’s comments come just one day after the Moscow Police Department said in a news release there was no threat to the public and evidence led investigators to believe this was a “targeted attack.”

College town on edge after killings

The killings and lack of information have rankled Moscow, a 25,000-strong city nestled on the Idaho-Washington border. The college town has not recorded a murder since 2015, according to state police data. Residents there are anxious and are “getting out of Dodge,” Latah County Sheriff’s Deputy Scott Mikolajczyk told the Idaho Statesman.

The father of one of the victims issued a statement Wednesday calling on police to release further information about the killings.

“There is a lack of information from the University of Idaho and the local police, which only fuels false rumors and innuendo in the press and social media,” Jim Chapin, the father of Ethan Chapin, said in the statement. “The silence further compounds our family’s agony after our son’s murder. For Ethan and his three dear friends slain in Moscow, Idaho, and all of our families, I urge officials to speak the truth, share what they know, find the assailant, and protect the greater community.”

Police suspect ‘edged weapon’ was used in killings of 4 University of Idaho students. Here’s what we know

University of Idaho President Scott Green offered condolences in a statement Monday and deferred to the police’s belief that there was no threat to the public.

“Moscow police do not believe there is an ongoing community risk based on information gathered during the preliminary investigation, however, we ask our employees to be empathetic, flexible and to work with our students who desire to return home to spend time with their families,” he said. “We do not know the investigation timeline, but we will continue to communicate to campus as we learn more.”

Green said Wednesday the university is encouraging students and employees to take care of themselves as they head into Thanksgiving break.

Blaine Eckles, university dean of students, did say there would be a candlelight vigil on November 30. Details are still being finalized, he said.

CNN has reached out to the university for comment and information on the case.

What little the public does know is grisly. Latah County Coroner Cathy Mabbutt told CNN affiliate KXLY what she saw at the gruesome crime scene.

“There’s quite a bit of blood in the apartment and, you know, it was a pretty traumatic scene to find four dead college students in a residence,” she said.

Mabbutt said the coming autopsies could provide further information about what happened.

“There could be some, you know, some evidence of the suspect that we get during the autopsies which would be helpful,” Mabbutt said.

What we know about the victims

The University of Idaho identified the victims as:

Just hours before their deaths, Goncalves posted a photo of the foursome with the caption, “one lucky girl to be surrounded by these ppl everyday,” adding a heart emoji.

Chapin was one of three triplets, all of whom are enrolled at the University of Idaho, the family said in a statement.

“Ethan lit up every room he walked into and was a kind, loyal, loving son, brother, cousin, and friend,” his mother Stacy Chapin said. “Words cannot express the heartache and devastation our family is experiencing. It breaks my heart to know we will never be able to hug or laugh with Ethan again, but it’s also excruciating to think about the horrific way he was taken from us.”

Alivea Goncalves, Kaylee’s sister, sent a statement to the Idaho Statesman on behalf of her family and Mogen’s.

“They were smart, they were vigilant, they were careful and this all still happened,” she said. “No one is in custody and that means no one is safe. Yes, we are all heartbroken. Yes, we are all grasping. But more strong than any of these feelings is anger. We are angry. You should be angry.”

Jazzmin Kernodle, Xana’s older sister, described her as “positive, funny and loved by everyone who met her.”

“Xana was one of the best people I have ever known. I am lucky to have had her as a sister. She was loved by so many and had the best friends surrounding her. You rarely get to meet someone like Xana,” she said.

“She was so lighthearted, and always lifted up a room. She made me such a proud big sister, and I wish I could have had more time with her. She had so much life left to live. My family and I are at a loss of words, confused, and anxiously waiting for updates on the investigation.”

She also offered condolences to the other victims and their families. “My sister was so lucky to have them in her life.”

Due to the killings, the city canceled its long-standing Artwalk festival “in respect for the victims of this week’s tragedy on the University of Idaho campus as well as those in the Vandal and Moscow community who are united in mourning.”