The world held its breath awaiting news of Tiger Woods’ condition after the golf legend suffered serious injuries Tuesday in a rollover crash near Los Angeles.Woods, 45, was awake and responsive after a lengthy surgery at the Harbor-UCLA Medical Center, according to a statement early Wednesday on his Twitter account.Here’s what we know so far about the crash:

What caused the crash?

Traffic investigators could take days or weeks to determine cause of the crash as they investigate whether speed, fatigue or operator error were factors, or whether Woods struck something in the road, causing him to lose control, Lt. Michael White with the LA County Sheriff’s Office told CNN affiliate KCAL/KCBS.Woods was driving shortly after 7 a.m. PT in Rancho Palos Verdes when the SUV he was using crossed a median and went across two lanes of road before hitting a curb, hitting a tree and landing on its side off the roadway in the brush. No other vehicles were involved.

Woods needed to be extricated from his vehicle by a rescue crew using a pry bar and ax, according to LA County Fire Chief Daryl Osby.Woods was driving downhill on a winding road in an area known as a trouble spot for speeding and accidents, Villanueva and Sheriff’s Deputy Carlos Gonzalez said. 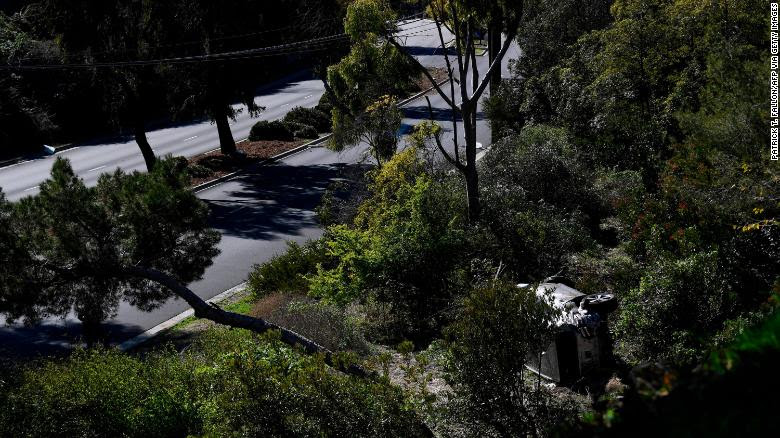 Woods’ car came to rest on the driver’s side in brush on the side of the road.Weather was not a factor in the accident, officials said in a Tuesday news conference. There was no evidence of impairment, but the crash is under investigation, officials said.Asked at the news conference whether Woods may have been on the phone at the time, Villanueva said investigators will have to ascertain whether distracted driving played a role.

What’s the status of his injuries?

Woods was taken by ambulance to the Harbor-UCLA Medical Center in serious condition with non-life-threatening injuries, according to the LA County Fire Department.”He was able to communicate, and he was conscious,” Villanueva said.Gonzalez, the first responder at the scene, said he kept Woods talking until the fire crews arrived. 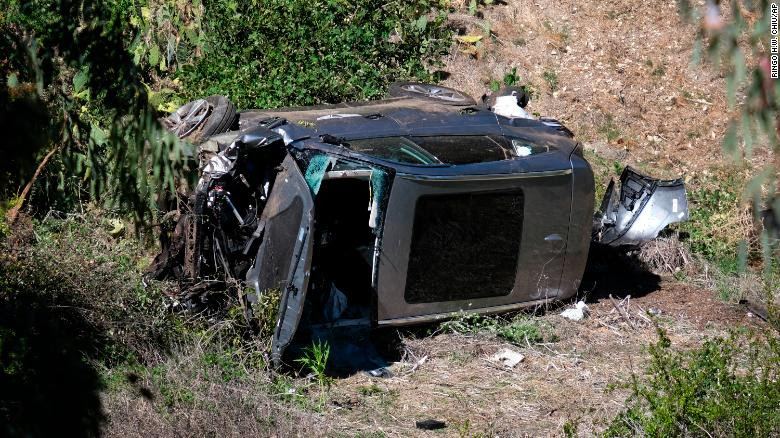 Tiger Woods’ vehicle rests on its side after the rollover accident Tuesday.Woods suffered compound fractures in his legs, a source told CNN.A compound fracture “is an open fracture, and the bone actually protrudes from the skin — something that would have been noticeable at the time of the injury and … something that obviously needs to be treated very quickly,” CNN Medical Correspondent Dr. Sanjay Gupta said.”Mr. Woods suffered significant orthopaedic injuries to his lower right extremity that were treated during emergency surgery,” Dr. Anish Mahajan, chief medical officer at Harbor-UCLA Medical Center, said in a statement that was posted on Woods’ Twitter account.”(O)pen fractures affecting both the upper and lower portions of the tibia and fibula bones were stabilized by inserting a rod into the tibia,” he added. “Additional injuries to the bones of the foot and ankle were stabilized with a combination of screws and pins. Trauma to the muscle and soft-tissue of the leg required surgical release of the covering of the muscles to relieve pressure due to swelling.”A statement on Woods’ Twitter account said he was awake and responsive after a “long surgical procedure.”

What type of car was Woods driving?

Woods was driving a 2021 Genesis SUV. The front end of the vehicle was destroyed and the airbags were deployed, Villanueva said. Woods was wearing a seat belt, Gonzalez said.”Thankfully the interior was more or less intact, which kind of gave him the cushion to survive what otherwise would have been a fatal crash,” Villanueva said.The Genesis was provided to Woods as a courtesy car by the sponsor of the golf tournament he hosted over the weekend.Woods hosted the Genesis Invitational at Riviera Country Club in Pacific Palisades over the weekend, and some proceeds went to his foundation.Woods didn’t play because of a recent back surgery.Mark Del Rosso, president and CEO of Genesis Motor North America, said Tuesday that he was “heartbroken” to hear of the accident.”Our thoughts and prayers are with him and his family,” Rosso said.