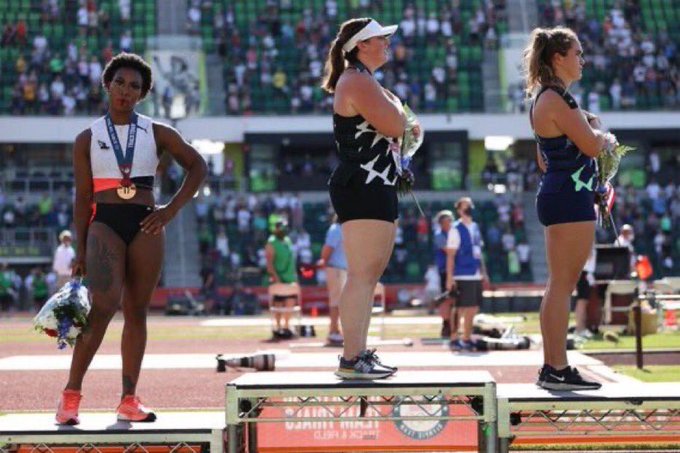 Olympian Gwen Berry protested during the national anthem during the Olympic trials on Saturday when she turned away from the flag on the medal podium and held a t-shirt over her face.

Press secretary Jen Psaki was asked about Berry’s protest on Monday by a reporter, and while she said she hasn’t spoken with President Joe Biden about it specifically, Psaki defended the hammer thrower’s actions.

“I know [Biden is] incredibly proud to be an American and has great respect for the anthem and all that it represents, especially for our men and women serving in uniform all around the world,” Psaki said.

“He would also say, of course, that part of that pride in our country means recognizing there are moments where we are, as a country, haven’t lived up to our highest ideals. And it means respecting the rights of people granted to them in the Constitution to peacefully protest.”

“It means respecting the rights of people granted to them in the Constitution to peacefully protest” pic.twitter.com/ztADFy83dt

Berry finished third in the hammer throw at the trials on Saturday and qualified for her second Olympics. She took the podium for the medal ceremony as usual after.

The national anthem, however, isn’t played for every medal ceremony at the trials like it is the games. The song is instead played just once each day — which took place during Berry’s ceremony.

Berry, who has protested during the national anthem in the past, then turned away from the American flag and raised a t-shirt that read “Activist Athlete” over her face. She felt that she was set up.

Stop playing with me pic.twitter.com/WLN3clqOCM

Naturally, her move drew plenty of harsh criticism despite protests during the national anthem having become commonplace across the sports landscape.

Berry shared messages and emails she received from critics on Twitter.

Warning: Messages that Berry shared on Twitter contain language that is NSFW.

Look at my supporters!! 😘 pic.twitter.com/AIytcCg4bF

She also responded to Republican critics, like Rep. Dan Crenshaw (R-TX) — who claimed that athletes who protest like Berry did should be removed from the team completely — and Fox News.

At this point, y’all are obsessed with me https://t.co/HBWCE28s7x

Berry, though, said all of the hate she has received is just proof that people are so focused on patriotism that they can’t focus on the root of why she and other athletes are protesting in the first place.

These comments really show that:

2.) Even after the murder of George Floyd and so many others; the commercials, statements, and phony sentiments regarding black lives were just a hoax

Thank you! I never said I hated this country! People try to put words in my mouth but they can’t. That’s why I speak out. I LOVE MY PEOPLE. ✊🏾 https://t.co/fbKB5d9H2I