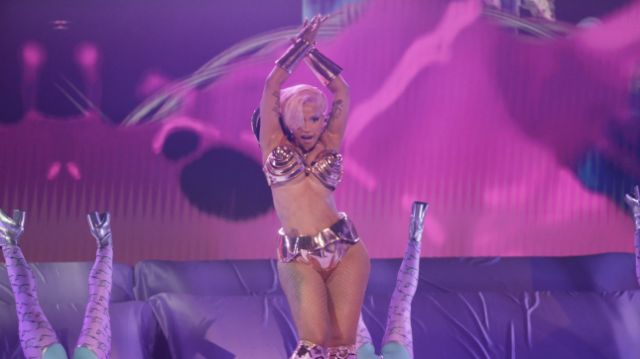 ‘WAP,’ Silk Sonic and social justice highlight an amazing Grammy night made a splash with their sex
positive performance of WAP

Megan Thee Stallion was one of the big winners at Sunday’s 63rd Annual Grammy Awards, taking home the Best New Artist honor as well as Best Rap Song and Best Rap Performance for her duet with Beyoncé, “Savage.” But it was another Megan duet, “WAP,” that won the night, when she and Cardi B joined forces for their first-ever televised performance of their X-rated sex-positivity anthem.

Megan and Cardi toned down the raunchy song as much as they could in order to make it past the CBS censors. Even the radio edit, which usually features the chorus “wet and gushy,” was changed to the more PG-13 “wet, wet, wet” (which seemed like a double-standard, since a sanitary napkin commercial with the verb “gush” aired during the Grammys not much later). But the performance was still racy enough that it didn’t air until after 10 p.m. on the East Coast and was proceeded by host Trevor Noah’s comical warning: “If you have small children in the room, just tell them it’s a song about giving a cat a bath.” And it probably lit up the FCC’s complaint hotline as soon as the hip-hop queens left the stage. 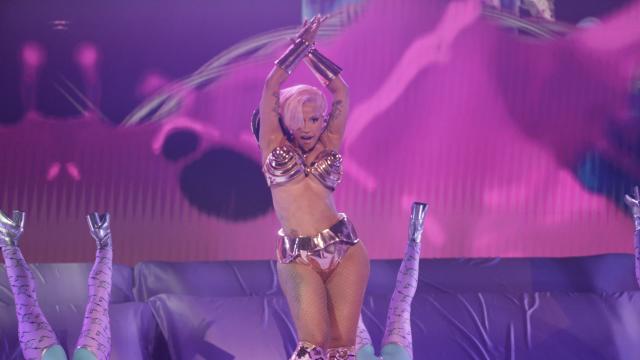 Cardi B and Megan Thee Stallion perform “WAP” at the at the 2021 Grammy Awards. Courtesy: CBS/Recording Academy

GIFable moments of Cardi and Megan’s sci-fi strip-club spectacle included Cardi pole dancing around the towering spiked heel of a giant stiletto shoe (while being showered with dollar bills) and Cardi and Megan delivering their final climactic verses while twerking and writhing on a massive lavender bed. Even the usually loquacious Noah seemed at a loss for words once the dollar bills had settled, trying to keep it clean as he raved about the bed’s lush thread count before stammering, “Wait, wait, I just realized something: This is a dream! This is a dream that I have that I’m in bed with Cardi B, and then my grandmother comes in and whips our ass for having our shoes on in the bed!”

“WAP” was one of the highs of what was mostly a solid show, especially when graded on a COVID curve. The ceremony, helmed by first-time Grammy telecast producer Ben Winston, was originally supposed to take place on Jan. 31, but was delayed due to coronavirus concerns and ended up being staged outdoors, without an audience, at the Los Angeles Convention Center. But working within those limitations, the show took on an intimate Jools Holland/Unplugged feel, with artists performing in the round and cheering each other on from the sidelines. For the most part, it worked… although the ceremony did hit a few snags.

These were the other highs — and occasional lows — of an unprecedented, historic Grammy night:

HIGH: Who run the Grammys? Girls!

Beyoncé and Taylor Swift both made herstory Sunday, with Beyoncé setting a new record for the most Grammy wins ever by a female artist (and by any singer, male or female), and Swift becoming the first woman to win the Album of the Year award three times, a feat achieved previously by only Frank Sinatra, Stevie Wonder and Paul Simon. Swift’s enchanted-forest performance of her winning Folklore album’s “Cardigan” and “Willow” was also one of the most magical medleys of the night. Female artists shared the love across all “Big Four” categories, with H.E.R. winning Song of the Year for “I Can’t Breathe” and Billie Eilish winning Record of the Year for “Everything I Wanted.” 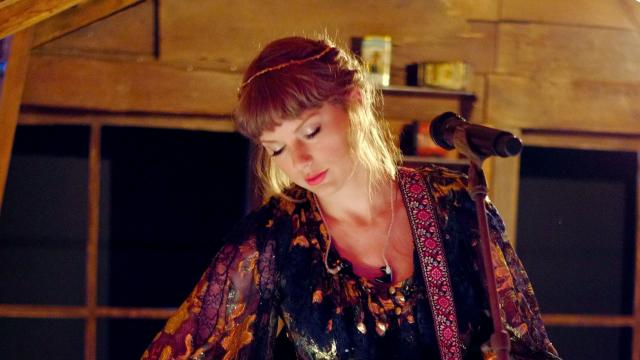 The new supergroup known as Silk Sonic made their TV debut with a smooth ’n’ groovy slow-jam performance of their Grammy-bait single “Leave the Door Open” — which simultaneously felt like a fantastic voyage back to the 1974 Grammys and a sneak preview of the 2022 Grammy ceremony (when the duo’s surely sensational forthcoming album inevitably sweeps all the awards). Mars and .Paak kept the retro vibes flowing when they later performed an electric tribute to rock ’n’ roll architect Little Richard during the In Memoriam segment, which felt like Mars’s unofficial audition for a Little Richard biopic. Good golly, that was fantastic. 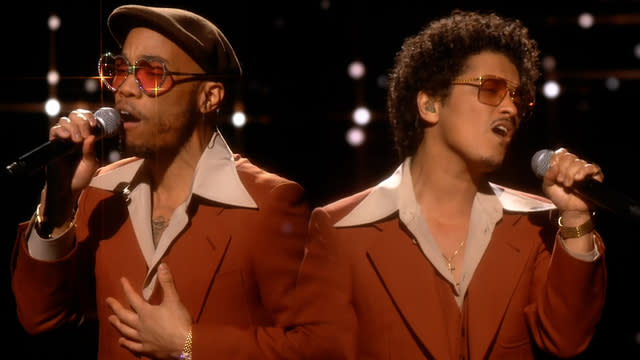 Bruno Mars and Anderson .Paak, also known as the R&B supergroup Silk Sonic, get fans in the mood for kissing and cuddling with a seductive performance of their new song “Leave The Door Open.” Stream the 63rd Annual GRAMMY Awards anytime on the CBS app and Paramount+.

Along with H.E.R.’s Song of the Year win for “I Can’t Breathe” just as former Minneapolis police officer Derek Chauvin’s murder trial in George Floyd’s killing gets underway, the most impactful Black Lives Matter statement of the night was rapper Lil Baby’s performance of his protest anthem “The Bigger Picture,” which featured audio by James Baldwin, a spoken vignette from activist Tamika Mallory directly addressing President Biden, Insecure actor Kendrick Sampson, Run the Jewels’ Killer Mike, and a fleet of cops in riot gear amid a fiery downtown L.A. cityscape. “My performance is important to me and I had to make sure it was right. … Just like with the song, this performance had to reflect the real. No sugar-coating. My family, my fans, and my city know who I do this for,” Lil Baby explained in a statement. 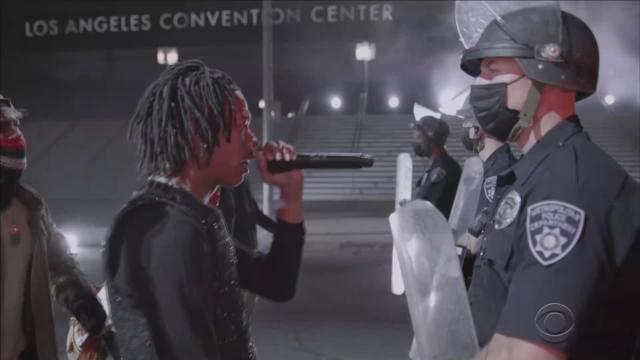 Silk Sonic’s Little Richard homage, Lionel Richie’s “Lady” serenade for his late friend Kenny Rogers, Brandi Carlile’s tribute to John Prine, and Brittany Howard and Chris Martin’s performance of “You’ll Never Walk Alone” were indeed touching, but the In Memoriam segment only honored Eddie Van Halen by briefly showing his signature ax on a dimmed stage. While the ceremony obviously could not honor everyone (Noah noted that more than 1,000 artists were considered), such a fleeting reference to one of the most influential guitarists of all time was an egregious and unforgivable snub.

So in a more than 3 hour show, with 5 months to prepare, this is all #GRAMMYs could muster for one of the most iconic impactful artists in music history… they reached new levels of shame & disrespect. I am besides myself. #FuckTheGrammys pic.twitter.com/YRaX55WFWW

LOW: You’ll never walk alone… as long as you have a flask

Brittany Howard’s above-mentioned In Memoriam performance, as powerful as it was, was somewhat undermined when just minutes later a Johnnie Walker commercial featuring her rendition of the same song aired on CBS. Judging from the Twitter reactions, this blatant product (mis)placement left a bad taste in some viewers’ mouths.

…though they coulda held the Johnnie Walker commercial where Brittany Howard sings the same song she just sang in the In Memoriam for like, two commercial breaks from now…. #GRAMMYs

First-time Grammy performer Styles opened the show in style, rocking a leather Jim Morrison/’68 Comeback leather look and a Bolan boa. Later, he switched to a smart tartan ensemble to accept his first Grammy, for Best Pop Solo Performance for “Watermelon Sugar,” cementing his status as both a pop superstar and fashion icon. 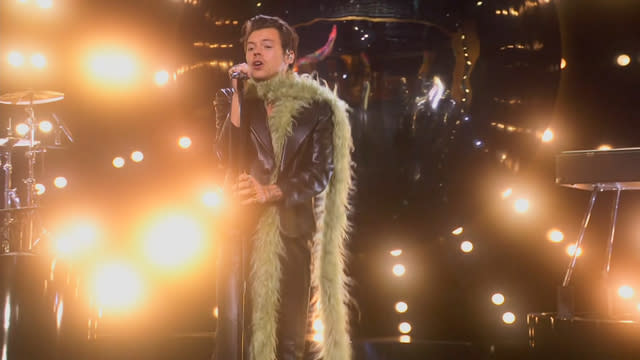 Breathe in a sultry live performance from Harry Styles, who decided to don a slinky green boa for an equally sexy rendition of his Best Pop Solo Performance-nominated song, “Watermelon Sugar.” Stream the 63rd Annual GRAMMY Awards anytime on the CBS app and Paramount+.

The ceremony saluted the independent theaters and clubs that are so important to the music industry and have been hit so hard by the COVID-19 pandemic, with J.T. Gray of Nashville’s Station Inn, Billy Mitchell of Harlem’s Apollo Theater, and Rachelle Erratchu of L.A.’s Troubadour presenting some of the key awards. Troubadour night manager Erratchu had the especially enviable task of handing Styles his statuette. 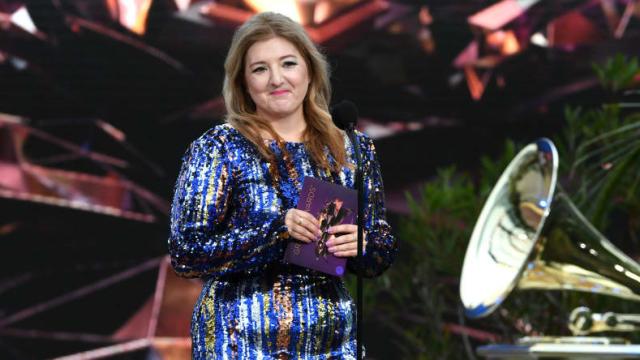 Grammys 2021: Rachelle Erratchu of the Troubadour

Rachelle Erratchu describes the importance of the Troubadour to the Los Angeles music scene during the 2021 Grammy Awards.

This year’s Lifetime Achievement honorees included Talking Heads, Grandmaster Flash & the Furious Five, Salt-N-Pepa, Selena and Babyface, but as is always the frustrating case with the Grammys’ Lifetime Achievement Awards, these artists received only a passing mention instead of the full onscreen tributes they deserved.

HIGH: Phoebe Bridgers kills it on the red carpet

No bones about it: The indie singer-songwriter and four-time nominee’s pearl- and crystal-studded 3D skeleton dress, from designer Thom Browne’s spring 2018 collection, was one of the night’s most haunting looks.

When the edgy and polarizing stand-up comic handed out some of the awards at the preshow Premiere Ceremony, he began his segment, which followed a performance by classical pianist Igor Levit, with: “Was I the only one that wanted to kill himself during that piano solo?” He then proceeded to mispronounce Best Regional Mexican Music Album winner Natalia Lafourcade’s name, and grumbled, “The feminists are going nuts. ‘Why is the cis-white male doing all this Latino stuff?’” Burr’s detractors on Twitter were probably relieved when he later lost out in the Best Comedy Album category to Tiffany Haddish.