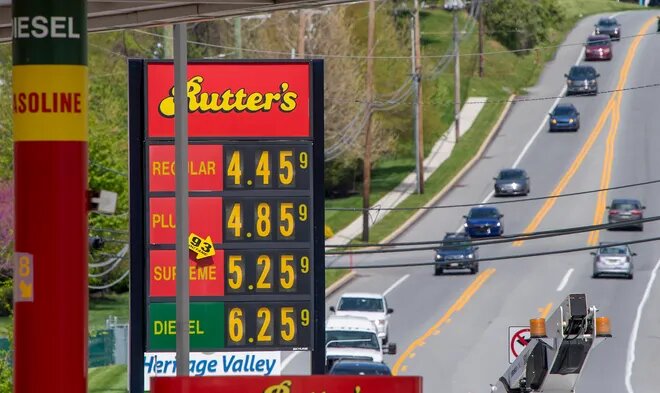 Gas prices in Pennsylvania hit a new record on Tuesday, with an average price of $4.54 a gallon, and with summer coming, drivers should not expect to see much relief.

The price is up 17 cents over a week ago, according to the AAA Fuel Gauge report. At that time, it cost $4.37 a gallon.

The national average on Monday is $4.37 a gallon, AAA reports.

Those who drive diesel automobiles are paying even more. It currently costs $6.23 a gallon in Pennsylvania. That price, too, set another record on Tuesday.

Why are gas prices rising again?

It’s a variety of reasons, including a mismatch between supply and demand as the economy has rebounded from the COVID-19 pandemic and the sanctions on Russia’s energy because of the war with Ukraine.

A sharp drop in gasoline and diesel inventories has occurred over the last few weeks, said Patrick De Haan, head of petroleum analysis at GasBuddy.

The East Coast, which covers Maine to Florida, has lost nearly half a million barrels a day in refining capacity in the last three years. The Philadelphia Energy Solutions refinery caught fire several years ago, and it will not reopen. It supplied 335,000 barrels a day. And during the pandemic, a refinery in Canada that contributed 150,000 barrels a day closed.

That means the East Coast has to rely more on imports, he said.

Diesel inventories on the East Coast are at their lowest level in 32 years, he said.

“… That’s why diesel prices have exploded, and that’s the problem that gasoline may face in the days ahead,” he said.

He did note that he doesn’t expect gasoline to be as dire because there’s more production of it, but multiple kinks in the hose exist for delivering lower prices.

The release of about 1 million barrels of oil a day from the Strategic Petroleum Reserve is helping to prevent prices from rising more significantly, De Haan said.Your stories live here.Fuel your hometown passion and plug into the stories that define it.

What drivers should expect this summer

Memorial Day, the unofficial start to summer, is only a few weeks away, and many families are planning vacations.

Drivers should expect to see elevated gas and diesel prices throughout the summer, De Haan said.

It’s possible that some minor improvements could offer relief, but don’t expect anything major because of the supply problem.

It’s difficult to predict, De Haan said, but he believes that gas prices in Pennsylvania will stay well above $4 a gallon.

Drivers should try to modify their habits, such driving more fuel-efficiently and combining trips, he said.

Here’s a look at the average prices for a regular gallon of gas around the state as of May 10, according to AAA: