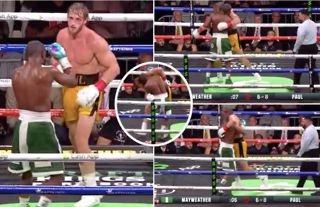 Once you have subscribed we will use the email you provided to send you the newsletter. You can unsubscribe at any time by clicking the unsubscribe link at the bottom of the newsletter email. By ticking this box you are agreeing to our terms and privacy policy

Logan Paul definitely gave a good account of himself on Sunday night, lasting the full eight rounds against Floyd Mayweather, one of the greatest boxers of his generation and arguably of all time.

The heavily-tipped and undefeated Mayweather was never in trouble against the YouTube sensation, and remained largely in control for the duration of the bout.

Paul came out with enthusiasm in the early rounds and was active, but quickly began to fade under the constant jab and slick footwork from the the self-anointed “The Best Ever”.

Logan Paul was effectively in survival mode from the fourth round on, clutching and hugging his opponent at any opportunity.

He somehow lasted until the end of the fight and evaded a knockout, which would’ve been the only way to victory as a result of the seriously-diluted set of rules for this exhibition bout.

However, it was during this late-fight barrage of pressure from “Money” Mayweather that fans noticed something strange among the regular defensive tactics of the “Maverick”.

Now the subject of a viral video on Twitter with 1.6m views, Mayweather catches Paul with a dazzling right hook on the counter, after the big, blonde-haired 189.5 pound-er missed wildly with a shot on his right.

Paul, after being caught flush on the face, visibly stumbles as a result and attempts to use his delaying tactics once more by leaning on Mayweather. Bizarrely, Floyd makes no effort to get out of the way of the falling Paul and actually engages in the “hugging” himself, almost holding the YouTuber up.

Eagled-eyed fans, having caught the footage of this moment of madness, led a heated debate on Twitter about whether the fight was a fix or not.

Despite the spreading speculation that the fight may have been a hoax, both men came out of the ring afterwards with large grins on their faces, and the winner was undisputedly their respective bank accounts.