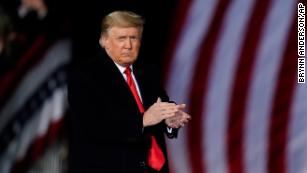 Washington (CNN)President Donald Trump has discussed issuing pardons for himself and his children with new urgency since the attack on the US Capitol, multiple sources familiar with the matter tell CNN.One source familiar with the conversations says there is a belief that a Trump “pardon of family and kids, is more likely and more urgent because a pardon could stave off prosecution.”However aides and allies are concerned over the public perception of a pardon following the January 6 riot, which led to the deaths of five people.

Sources tell CNN there is dissent inside the West Wing from those appalled by the attack, many of whom are pushing up against a President whose main concern is protecting himself and his family.The riot at the Capitol raises the potential of new legal exposure for the President, his allies and family members who participated in the rally should investigators pursue whether their words and actions could be subject to criminal prosecution.On Tuesday, Trump defended his remarks from January 6, saying they were “appropriate.”The White House did not provide a comment.The source familiar with White House conversations said that Trump might issue a blanket pardon to cover himself and his children up until the time he leaves office, adding, from Trump’s point of view, “it makes sense to just cover it all.”

White House counsel and Barr warned Trump not to self-pardonEven before last week, the President had told advisers he thinks that he and his family have been unfairly targeted and that he’s concerned legal pursuits could continue under the Biden Justice Department, according to a source close to Trump.Since his first year in office, Trump has discussed pardoning himself and his children, but the attack on the Capitol creates a new dynamic surrounding the messaging and “public relations” of such pardons, according to the person familiar with White House conversations.”Before the justification was, they haven’t done anything wrong,” the source said. But the attack on the Capitol potentially changes that. Trump’s “hard core base might not care, but some Republicans and former supporters wouldn’t like it,” the source added. “There is blood on their hands after January 6th.”One of Trump’s children, Donald Trump Jr., doesn’t want a pardon, a source with knowledge told CNN. “His father has never raised the issue with him but Don has told friends he doesn’t want a pardon, as he doesn’t believe it’s necessary,” the source said.Inside the White House many officials are disgusted by the attacks and don’t want to be involved with pardoning anyone who could have played a role, according to two people familiar with the matter.One source said that Trump intends to issue pardons beyond just his family members. “More people than you would expect. Rudy is an obvious one,” the person said, referring to Trump’s personal lawyer, Rudy Giuliani. “And lots of discussions about current staff.”The White House had planned to release a group of pardons last week, but it was delayed because of the riots, according to two sources familiar with the matter.

Trump probably can’t pardon himself. He may still tryCNN reported Monday that Trump’s White House Counsel Pat Cipollone and former Attorney General Bill Barr warned him against pardoning himself, but advisors say Trump may still do it, even though it would almost certainly be met with lawsuits.Presidential pardon power is untested and sources say both Barr and Cipollone thought it would be a bad idea for Trump to try to pardon himself. Barr believes a 1974 Justice Department legal memo finding that the president cannot pardon himself should stand, and Cipollone has not asked the Justice Department Office of Legal Counsel for a re-examination of the issue, according to two sources.The memo clearly states that under “the fundamental rule that no one may be a judge in his own case, the President cannot pardon himself.”On breaking with the Justice Department memo on self-pardon, a former senior administration official told CNN, “Trump could care less about the OLC memo. He will do whatever he wants and then fight it out in court if he has to.”