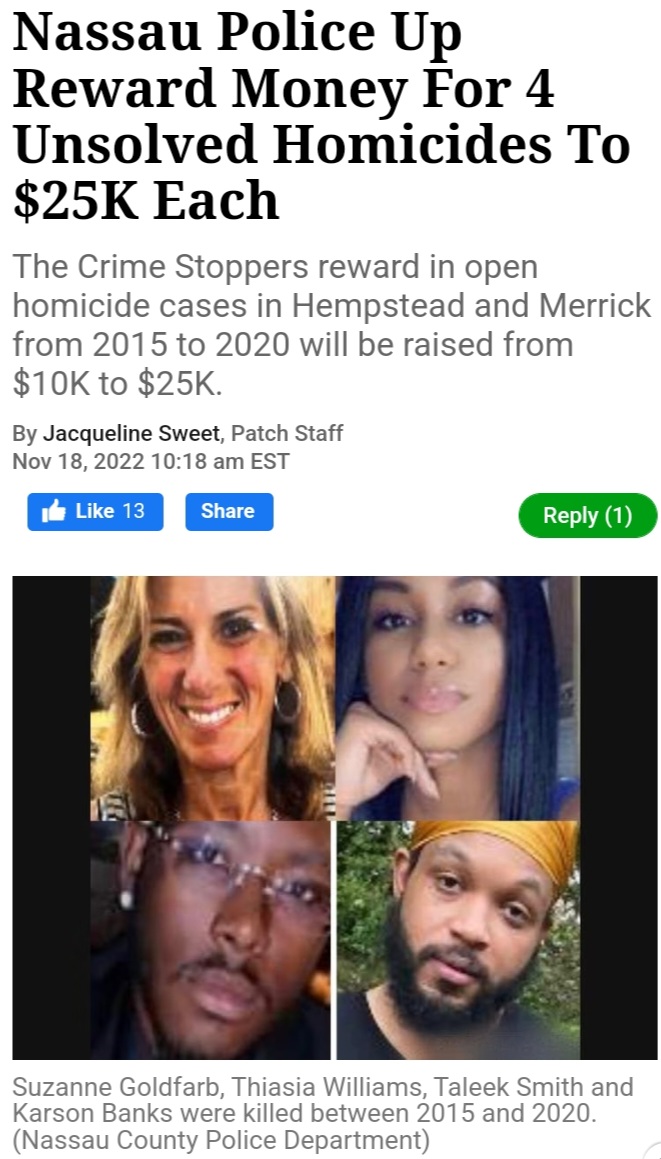 Thiasia Williams, a 28-year-old nurse, was picking up her boyfriend at a birthday party on MLK Drive in Hempstead in August 2020 when shots were sprayed from a white car. Her mother is desperate for justice.

“Please help provide, give me some peace to know something,” said Aurora Williams.

“She left a young son. Senseless shooting into a crowd like that, multiple shots, over 10 shots,” said Nassau Police Homicide Squad Det. Captain Stephen Fitzpatrick. “Dozens of people there. Somebody had to see something.”

Karson Banks was shot to death in October 2020 in Hempstead. His father is begging those who know the whereabouts of Ramel Fergusen, wanted in the murder, to do the right thing.

“We have to break this cycle of not speaking up. Too many of our young kids, your kids are dying because of colors. That makes no sense at all,” said Karl Banks.

Banks said his son tried to break free of gangs and moved away. But he was tracked down.

“Tell the truth. It may hurt. But guess what, in the long run you did the right thing,” said Banks. “Anybody that doesn’t want to speak up, you’re guilty.”

Suzanne Goldfarb was strangled in her Merrick cottage in 2015; tkiller is believed to be someone she knew. Taleek Smith was shot while sitting in a car in Hempstead in 2020.

Police are more than doubling the rewards.

“It’s not that we don’t know a lot in these cases. We just need those missing pieces of the puzzle that pushes us over the goal line,” said Fitzpatrick.

Ryder didn’t call these cold cases because he said the department never gives up on them. Someone out there knows something and can bring these families closure, he added