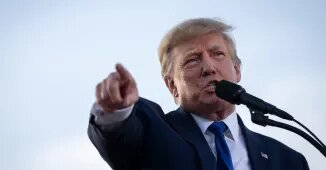 Former president Donald Trump was held in contempt of court by a New York judge Monday, for not providing documents subpoenaed by the state attorney general.

Trump lost his fight against a subpoena from state Attorney General Letitia James, then failed to produce all the documents by a court-ordered March 3 deadline, later extended to March 31 at his lawyers’ request.

The judge ruled contempt was appropriate because of “repeated failures” to hand over the materials.

Trump was not in the courtroom.

James is investigating whether the former president’s family company, the Trump Organization, misstated the values of its real estate properties to get favorable loans and tax deductions.

James has said her probe had found “significant evidence” suggesting that for more than a decade, the company “relied on misleading asset valuations”

A lawyer for Trump and the company said at the hearing that James’ investigation was a “fishing expedition.”

Trump, a Republican, denies wrongdoing and has called the investigation politically motivated. James is a Democrat.