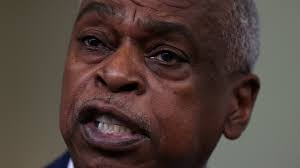 Wade Henderson, CEO of the Leadership Conference on Civil and Human Rights, told members of the Senate Homeland Security Committee Tuesday that “Congress must pass the For the People Act.” The remarks came in Henderson’s opening statement, which outlined several specific steps that members of Congress should take to combat domestic terrorism and violent extremism during a hearing involving representatives from religious and civil rights organizations.

WADE HENDERSON: I’d like to offer four recommendations today. First, Congress must pass the For the People Act to push back against the great white supremacists’ lie that encouraged the January 6th insurrection and has given rise to unprecedented attacks against voting rights. This Friday marks the anniversary of the 1965 Voting Rights Act. The Senate must pass as one and honor the many who gave their lives to protect our democracy.

Second, Congress should demand that federal agencies show how they are fighting white supremacist violence through existing tools and reject any new domestic terrorism charge or sentencing enhancements. There are already more than 50 terrorism-related statutes on the books and over a dozen other criminal laws, some of which are being used to prosecute the January 6th insurrectionists.

Our nation’s long history of abusing national security mechanisms, including the use of COINTELPRO against Dr. King, the post-9/11 targeting of Arabs and Muslims, and the FBI’s prioritization of, quote, “Black identity extremists,” unquote, serve as cautionary tales of how expanded national security authority leads to unjust targeting of already overpoliced communities.

Third, Congress must identify ways to address and dismantle white supremacy in law enforcement. While many police officers work to fulfill their duties honorably, transformational change is still needed to address the culture of policing that helps promote white supremacy groups as well as discriminatory policing practices and policies that make us all less safe.

Congress must demand a full accounting of how law enforcement is addressing white supremacy in their ranks, and the White Supremacy in Law Enforcement Information Act is a good first step. Congress and federal agencies must also identify ways to ensure that officers who incite racist violence are no longer welcome. It’s why the George Floyd Justice in Policing Act is so important.

Finally, Congress must pass HR 40 to study reparations for African-Americans and create a US commission on truth, racial healing, and transformation. [COUGHS] Excuse me. May and June 2021 mark the centennial anniversary of the Tulsa Massacre, when a white supremacist mob murdered Black Americans and burned the business– businesses and homes to destroy the successes of the Black Tulsa Community. Yet, many Americans still know nothing about this tragedy or others that have flowed from slavery until today.

Black people have been targeted with brutal violence, and they continue to be deprived of the benefits of economic growth. Congress must pass HR 40 and come to terms with the contradiction of who we say we are as a democracy and who we actually are. Reparations are owed. Transformation is required. Now is the time to create a shared vision for our nation, one where all people feel safe, valued, and heard.