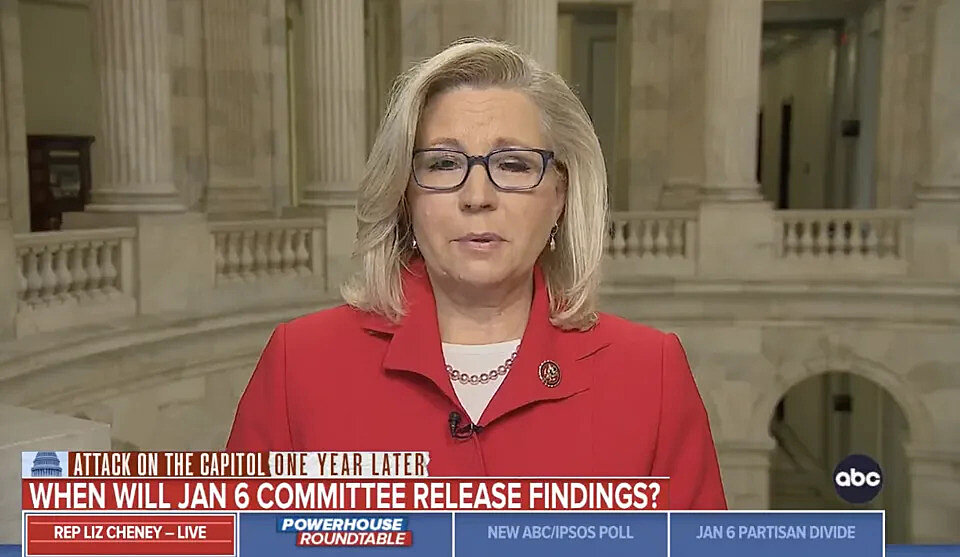 Rep. Liz Cheney said Sunday that her committee has evidence that then-President Donald Trump’s daughter and senior adviser, Ivanka, was among those pleading with the commander in chief to do more to stop the Jan. 6 assault on the Capitol.

“We have firsthand testimony that his daughter Ivanka went in at least twice to ask him to please stop this violence,” Cheney said on ABC’s “This Week.”

Cheney made the comments just days before the one-year anniversary of the attack, which her House committee is continuing to investigate. More public hearings are expected.

"The president could have at any moment, walked those very few steps into the briefing room, gone on live television, and told his supporters who were assaulting the Capitol to stop," Rep. Liz Cheney says of former Pres. Trump's actions on Jan. 6. https://t.co/zo7wSq6hc1 pic.twitter.com/sUYg0wGKsi

On Jan. 6, 2021, then-President Trump spoke at a rally seeking to overturn the results of the November election as Congress was certifying then-President-elect Joe Biden’s victory in the Electoral College. Trump urged his supporters to “fight like hell,” falsely alleging that the election was rigged.

A mob of those supporters attempted to physically stop the certification of Biden’s win, storming the Capitol and fighting the police officers who were protecting the building and the lawmakers inside it. Several of the rioters died during the assault, including one shot by a Capitol Police officer. More than 700 people have been charged with crimes in connection to the riot.

During the attack, multiple members of Trump’s inner circle urged him to forcefully denounce the violence and tell his supporters to stand down.

“He’s got to condemn this s*** ASAP,” Trump’s eldest son wrote to Meadows, according to Cheney’s testimony. Meadows replied: “I’m pushing it hard. I agree.”

According to the book “I Alone Can Fix It: Donald J. Trump’s Catastrophic Final Year,” Ivanka Trump told her aides at one point that day: “I’m going down to my dad. This has to stop.” Ivanka and her husband, Jared Kushner, were among the most senior advisers in her father’s White House.

President Trump did ultimately issue a statement urging his supporters to go home, but only after much of the violence had already unfolded.

Cheney, the vice chair of the committee investigating the assault, told ABC on Sunday that it’s “hard to imagine a more significant and more serious dereliction of duty” than Trump’s inaction that day.

“The committee has firsthand testimony now that he was sitting in the dining room next to the Oval Office watching the attack on television as the assault on the Capitol occurred,” said Cheney, one of a handful of Republicans who voted to impeach Trump after the attack.

"We have significant testimony that leads us to believe that the White House had been told to do something. We want to verify all of it," says Democratic Rep. Bennie Thompson on the House select committee investigating the Jan. 6 Capitol Hill riot. #CNNSOTU pic.twitter.com/G2d9wWaZ87

The Jan. 6 committee’s chairman, Rep. Bennie Thompson, D-Miss., similarly told CNN on Sunday that the panel has “significant testimony that leads us to believe that the White House had been told to do something.”

“We want to verify all of it, so that, when we produce our report and when we have the hearings, the public will have an opportunity to see for themselves,” Thompson added