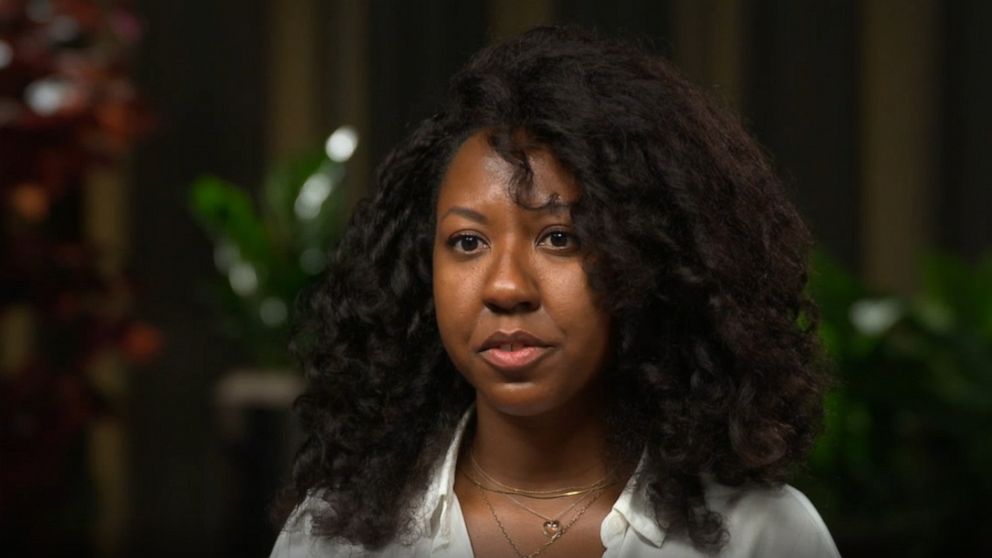 “I knew if he got me on the floor, I would be dead,” Nikkita Brown said.ByTJ Holmes,Hyeyoon (Alyssa) Choi, andSabina GhebremedhinSeptember 9, 2021, 7:41 AM• 6 min read

A Black woman said she was walking out of a closed park in Chicago, adhering to police instructions, when a white police officer attempted to tackle her, allegedly unprovoked.

Brown agreed, but the officer insisted on driving behind her as she walked out of the park, and eventually got out of his vehicle to follow her on foot, she told ABC News in an exclusive interview airing Thursday on “Good Morning America.”

Brown said she consistently told him, “I am leaving” and “I am walking away,” as she actively walked toward the exit.

The officer got out of his car and told her, “You can go to jail,” according to a video taken by Brown who recorded part of the encounter. Brown said he also allegedly told her she would never see her dog again.

Brown said she took her cell phone out to record the altercation and call for help.

“Even if somebody didn’t answer,” she said, she wanted to “at least leave a voicemail and say, ‘if you call me in the morning and you don’t reach me, I’m in jail, or worse.'”

The unmasked officer continued to approach Brown, ignoring her request to stay 6 feet away, videos show.

In one clip, the officer can be heard saying, “I don’t need a mask on, I’m outside,” shortly before attempting to tackle Brown, appearing to restrain her by kicking her legs and knocking her phone out of her hands.

After a 2-minute-long physical altercation during which Brown remained on her feet and screamed for help, Brown and the officer separated and both left the scene without the officer making an arrest.

“I knew if he got me on the floor, I would be dead,” Brown told ABC News.MORE: Videos show altercation between police officer and Black woman walking dog

According to the Civilian Office of Police Accountability (COPA), the group inquiring into the incident, the investigation is ongoing.

“We have a responsibility to investigate allegations of police misconduct and determine if they are well founded based on the facts and evidence of each case,” interim COPA chief Andrea Kersten said in a statement. “If violations did occur, COPA will hold the officer accountable.”

A Chicago Police Department spokesperson told ABC News that “the officer in question has been placed on desk duty as the COPA investigates the video.”

Brown said there were others in the area that night, and she felt profiled because of her race.

“I walked past four kids that were behind me… white males. As soon as I saw the car pull up, I looked behind me to see if he said anything to the kids. He didn’t,” Brown said.

At a press conference on Aug. 30, the CPD Superintendent David O. Brown said the investigation into the incident was opened in the Bureau of Internal Affairs and had since been transferred to the COPA.

If COPA determines that the officer violated a policy, a disciplinary recommendation will be forwarded to David O. Brown, at which point he is given the choice to agree or disagree with COPA’s recommendation, the superintendent said during the press conference. If he disagrees with COPA, the incident goes to the Chicago Police Board for adjudication.

The officer has not been identified yet due to privacy reasons, a COPA spokesperson said. Brown’s attorney, Keenan Saulter, is requesting the identity of the officer be released in order to file a formal complaint against him.

“There were other individuals in the park that night. So we still have to come back around to the question of ‘why her?'” Saulter said. “The worst scenario would have been that he writes her a ticket for being in the park after 11:00 p.m.”MORE: ABC News analysis of police arrests nationwide reveals stark racial disparity

The officer has allegedly been involved in previous cases of racial profiling, Saulter said, and should be fired from the force.

“If anything, I should feel even more protected by a police presence as a single woman walking at night, not be fearful that I’m going to die at the hands of an officer,” Brown said.