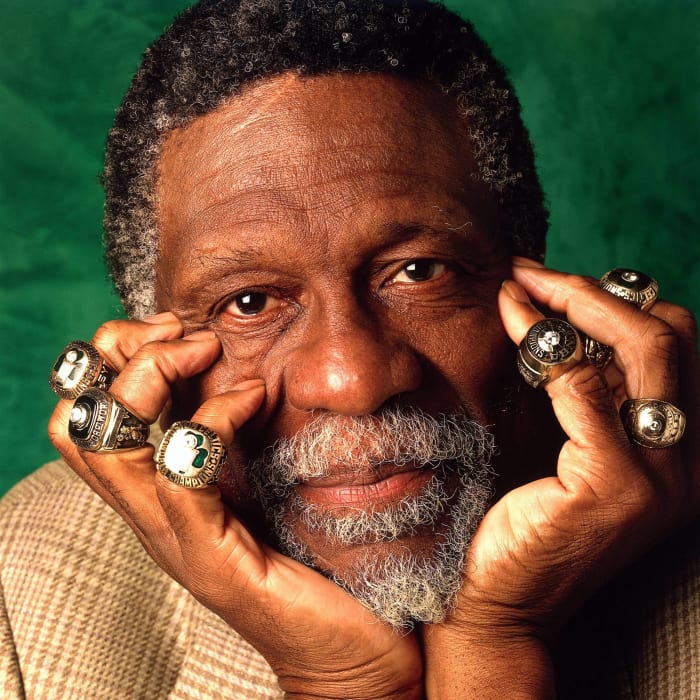 If we’re all on a playground in the afterlife and we’re choosing up sides to decide who goes to heaven or hell, then my first pick is Bill Russell.

You can have anybody else you want. You take Michael Jordan, then I get LeBron James. You get Larry Bird, then I get Magic Johnson. Jerry West or Stephen Curry. And so on. They cancel each other out, pretty much, because none of their skill sets are unique. All of them — anybody you would pick with eternity on the line — would, first of all, be an offensive-end-of-the-court star.

But I’d have Russell, by far the greatest player who barely needed to touch the ball yet scored enough for the sake of proper balance without being fed. I’d have Russell, who got the ball back for his team by both rebounding and controlled shot blocking better than anybody ever, even Wilt Chamberlain. I’d have Bill, who covered his man but, if you lost yours, made the guy wish that you still were defending him.

Russell would subtly change everyone’s game — his whole team’s for the better and everyone on your team’s for the worse. But nobody would make him change his game at all. And we would win. Don’t think so? Enjoy hell.

Russell, who died Sunday at 88, retired from the NBA in 1969 just before I joined The Washington Post’s sports department. So I never covered him. And I only met him once. (I just said, “Thank you.”)

But, with each decade, as fewer sportswriters had a memory of him as a player, as Russell was damned with the faint praise of being a legend from an era when most TVs were black-and-white, I found myself among a dwindling group of keepers of the “Russell is the Greatest of All Time” flame. That is the opinion that has gotten me the most pitying, “poor old-timer” looks. But I persist.

Russell is not the GOAT because he has 11 rings, more than anyone in any pro sport, and did it in the span of 13 seasons. Russell almost had an “undefeated” career — all world titles, every year.

He’s not the GOAT because he was the greatest defender in NBA history. In fact, he may be the greatest defensive force in any of the four major sports — more impactful in preventing scoring than any NFL pass rusher, NHL goalie or pitcher who only starts every few days.

And Russell is not the GOAT just because of his talents: rebounding (22.5 per game), shot blocking (the best ever), enough scoring (15.1 points), smart passing and igniting the fast break with outlet passes as well as any big man ever has.

Russell was all these things, as well as the player-coach on his last two title teams. However, what Russell had to a greater degree than any player I have ever seen in any sport was ferocious, indomitable seriousness of purpose, wedded to elite intelligence regarding both his sport and his opponent’s psychological weaknesses. His walk to center court evoked a wise, ominous warrior.

Russell sprinted the court — sweat dripping from his goatee, his long limbs pumping — as if he was prepared to die of exhaustion before permitting his team to lose. His presence, his competitive menace, his fearless, reckless abandon in midair and his desire to glare into the opponent’s psyche and break some crucial gear made him exhilarating and frightening to watch.

I remind my colleagues that Russell was 6-foot-10, but his wingspan was 7-foot-4. In a famous anecdote, Russell met his perfect foil — Chamberlain — for a photo op when Wilt entered the NBA. The photographers wanted a side-by-side, the subtext being that the chiseled, 7-1, 275-pound Wilt was Goliath to the lean David of Russell.

Then Russell asked for a shot with both holding their hands as far as they could reach over their heads. With his long arms, Russell had a fingertip advantage. Bill was taller in some basketball sense — and as a champion high jumper in college, Russell probably had a vertical edge.

Anybody who thinks Russell didn’t “play big enough” for this century is probably wrong.

Now for the confession before this GOAT business gets overdone, in a week when we should just be united in celebration of a distinguished American life. I’m biased. Russell was, and still is, my favorite athlete of all time.

Russell broke into the NBA in 1956, the same year I became a sports-addicted child. The Celtics dominated the NBA’s weekly national telecast, so Washingtonians got to see him often. That he became one of the most prominent athletes to take strong political stands in the 1960s — and through his life — only added to my admiration then and keeps his memory powerfully relevant now.

In honor of Bill Russell’s 11 titles, here are 11 of his greatest moments

I didn’t go to college in New England because the Celtics were on TV there. But, considering what I got to see from 1965 to ’69, that might have been a good reason.

In all four of those postseasons, Russell faced Wilt. In the first three years, Wilt was joined in Philly by three other future Hall of Famers — Hal Greer, Chet “the Jet” Walker and Billy Cunningham, as well as hulking all-star Luke Jackson and Wali “Wonder” Jones. In two of those years, six-time all-star Larry Costello came off the bench.

In the fourth season, Wilt was traded to the Lakers to join Jerry West and Elgin Baylor, creating a Three Supernova team that the 21st century hasn’t matched, since at the time, that trio was believed by some to include the best guard, forward and center in history.

The Celtics won the title in three of those four years.

In Russell’s final game — a Game 7 for the ring, naturally — Chamberlain took only eight shots and was so competitively broken by Russell’s career-long ownership of him that the Lakers benched him in the late moments of a 108-106 game.

Was Wilt rattled that Russell would pick the biggest spot to swat his “unblockable” fallaway jump shot or reject his fearsome power dunk? Or did fear of the free throw line (45 percent that year) make him a mess, too?

In those 1969 Finals, Russell held Chamberlain, who was still potent enough offensively to average 27 points the next season, to 11.7 points per game. Celtics bit players Larry Siegfried and Don Nelson outscored Wilt — while playing a fraction of his minutes.

In his early years, Russell had Bob Cousy, Bill Sharman, Tom Heinsohn, Frank Ramsey, Sam Jones and K.C. Jones — all future Hall of Famers — as running mates. But when I watched him in college, still willing himself to play 48 minutes a game in the playoffs, Russell parlayed the great John Havlicek and an aging Sam Jones, plus obscure modestly gifted men like Em Bryant, Siegfried, Nelson and Satch Sanders, into champions.

By the last two titles, Russell was the coach, too, as Red Auerbach moved himself up to team president.

Many who knew Russell personally will cite all of the injustices he endured, and surmounted, in his life to form a complex character full of insight, conscience and depth.

I only know what I saw. For eternity, I’ll pick Bill.