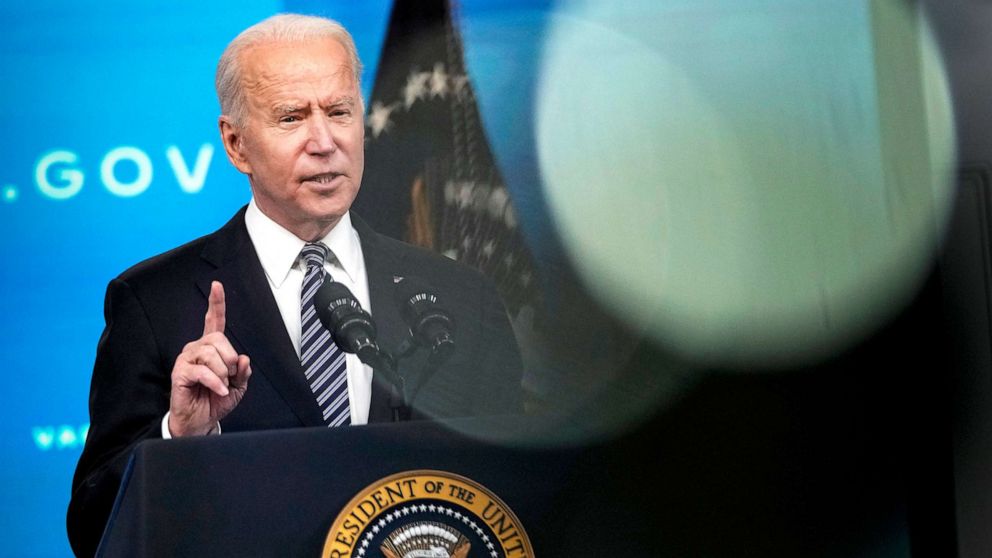 He directed the U.S. intelligence community to “redouble their efforts.

President Joe Biden said Wednesday he is ordering U.S. intelligence agencies to “redouble their efforts” to investigate the origins of COVID-19, including “specific questions for China.”

Biden said an initial report he asked for earlier this month on whether the virus came from human contact with an infected animal or from a lab incident in China was inconclusive, so he’s asking for a second report in 90 days to “bring us closer to a definitive conclusion.

“As of today, the U.S. Intelligence Community has ‘coalesced around two likely scenarios’ but has not reached a definitive conclusion on this question,” Biden said in a statement. “Here is their current position: ‘while two elements in the IC leans toward the former scenario and one leans more toward the latter – each with low or moderate confidence – the majority of elements do not believe there is sufficient information to assess one to be more likely than the other.'”

Biden’s directive is a significant change in how the White House is dealing with the theory the virus might have originated from the Wuhan Institute of Virology — one elevated last year by former President Donald Trump, former Secretary of State Mike Pompeo and other hawkish Republicans.

While the Biden administration had until now said the World Health Organization should lead a more intensive investigation and put pressure on China to be more transparent about what happened, Biden’s statement Wednesday calls on the U.S. intelligence community, not scientists, to spearhead the effort.

Deputy principal press secretary Karine Jean-Pierre, when repeatedly asked Wednesday what prompted Biden’s directive, said, “What has changed is he wants to give another 90 days to dig a little deeper.”

His statement, though, follows growing pressure from Republicans and the scientific community — unsatisfied with efforts from the World Health Organization and China — to identify an origin more than a year after a pandemic that has killed nearly 3.5 million worldwide and nearly 600,000 Americans.

Biden advisers recently stepped up calls for stronger WHO investigation

The statement also comes after top administration officials this week faced a barrage of questions from Republicans on whether the Biden was doing enough to investigate the virus’ origin and to pressure China.

COVID-19 adviser Andy Slavitt said at a White House briefing on the pandemic Tuesday that a further origin probe is “a critical priority for us.”

“We need to get to the bottom of this, and we need a completely transparent process from China. We need the WHO to assist in that matter. We don’t feel like we have that now,” Slavitt said.

Health and Human Services Secretary Xavier Becerra also told a virtual World Health Assembly meeting on the same day there needs to be a “transparent, science-based” follow-up into the origins of the pandemic.

“We don’t have enough information to draw a conclusion about the origins,” Psaki said, adding that the president continues to push for an independent, international investigation following a WHO report in March falling short of expectations.

In contrast to Biden, Psaki, when asked if the U.S. should be spearheading that effort, called for the WHO — not the U.S. intelligence community — to take the lead.

“Again, the WHO, which we rejoined when the president took office, is the body that we have been pressing and is the appropriate body for moving this investigation forward,” she said.

The WHO lacks real enforcement ability, relies on international cooperation and has voiced concerns multiple times that Chinese authorities have withheld information.

Scientists had hoped a long-awaited WHO report in March would shed more light on the origin issue, but the report came to no firm conclusion and was subject to heavy scrutiny. It did reference a lab leak as a possibility but ultimately downplayed this scenario as “extremely unlikely,” saying instead that the virus likely jumped from animal to human.

The ongoing mystery of the origin of the virus, coupled with a lack of transparency from China, fueled questions for Biden health experts from Senate Republicans Wednesday.

At a hearing, Sen. Lindsey Graham, R-S.C., pressing on the fact that an intermediate host for COVID-19 has not been found, asked Biden’s chief COVID-19 adviser Dr. Anthony Fauci how long it would take before the U.S. could conclude the virus came from a lab. Fauci declined to give a time frame.

“I don’t think we can give a time element on that senator, for the simple reason we still have not yet confirmed what the host is from Ebola,” Fauci replied, referring to that outbreak years ago.

“I think we should send a clear signal to China,” Graham said, “which seems to be the source of a lot of pandemics, that if this did occur in the lab, expect something to happen ’cause if we don’t, we’re just going to reinforce this in the future.”

When Sen. Mike Braun, R-Ind., pressed Fauci and National Institutes of Health Director Dr. Francis Collins to commit to ask Biden to declassify information on the origin of the virus, they declined. Fauci and Collins said they believe the virus “arose naturally” — but they didn’t rule out the lab-leak origin theory.

“We cannot exclude the possibility of some kind of lab accident,” Collins said, emphasizing he and Fauci also support further investigation.

“I still believe that the most likely scenario was that this was a natural occurrence, but no one knows that 100% for sure,” Fauci said. “And since there’s a lot of concern, a lot of speculation, and since no one absolutely knows that, I believe we do need the kind of investigation where there’s open transparency and all the information that’s available to be made available to scrutinize.”

Biden’s new call for a U.S. intelligence community investigation — rather than relying on the WHO — also follows a group of renowned scientists earlier this month penning a letter in Science Magazine that concluded, “Theories of accidental release from a lab and zoonotic spillover both remain viable.”

Trump: ‘I was right’

Under the Trump administration, the State Department launched an internal probe through its bureau of arms control and verification into the origins of the COVID-19 pandemic, including whether the Wuhan lab was responsible for the virus “leaking.”

Disputing a news CNN report on Wednesday, the Biden administration said it did not terminate the probe early but only after its findings were reported this past February and March. “With the report delivered, the work was ended,” State Department spokesperson Ned Price told ABC News.

Price said there are still “serious questions about the earliest days of the COVID-19 pandemic, including its origins” in China. He called China’s recent comments that their role in any investigation is complete “disappointing and at odds with the rest of the international community.”

Former Secretary of State Mike Pompeo, who launched the report and has repeatedly pushed the theory that the Wuhan Institute of Virology leaked the virus, suggested Wednesday that the administration move was political.

“President Biden sides with China, WHO and the liberal media on Wuhan virus—joining the ‘nothing to see here crowd’ by shutting down State Dept. pandemic origin investigation I commenced,” Pompeo tweeted. “This isn’t political. America must lead on this.

“Remember, China has a history of infecting the world, and they have a history of running substandard laboratories,” Pompeo told ABC News last May. Trump claimed one week prior that he had seen evidence giving him a “high degree of confidence” that the lab was the origin — but refused to elaborate.

With the lab-leak theory getting new attention, Trump released a statement this week, saying, “Now everybody is agreeing that I was right when I very early on called Wuhan as the source of COVID-19, sometimes referred to as the China Virus.”