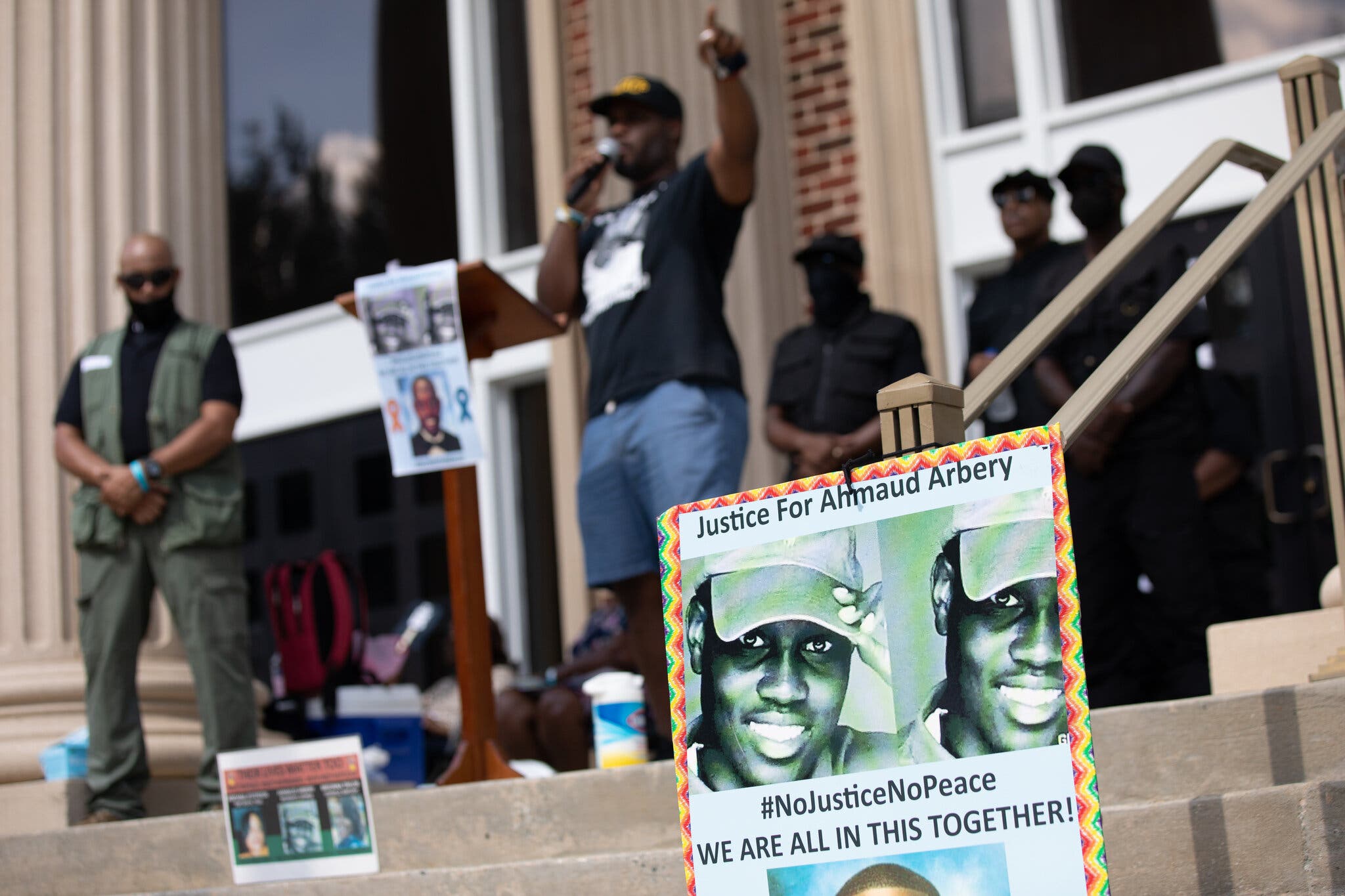 By Hannah Knowles and Mark Berman Yesterday at 8:12 p.m. EDT

The killing itself was shocking to Georgians — three White men chasing a Black man in pickup trucks and then shooting him on a residential street.

So was the local authorities’ response: 74 days without charges.

While many killings that sparked racial justice protests in 2020 cast a harsh spotlight on police actions in places like Minneapolis and Louisville, Ahmaud Arbery’s killing in the coastal community of Satilla Shores near Brunswick, Ga., brought a flood of attention to another powerful part of the justice system: prosecutors.

As Arbery’s case drew more scrutiny, so did the actions of district attorneys connected to it, leading to criminal charges, new support for statewide oversight and a debate over how to balance accountability with prosecutors’ independence. Activists, lawmakers and lawyers are still pushing for changes as a jury slowly comes together for the murder trial of the three men whose pursuit of Arbery a district attorney once called completely justified.

Arbery’s death fueled calls for a state commission to investigate prosecutor misconduct. The Georgia state bar has backed rule changes that would allow officials to pull law licenses over prosecutorial ethics violations, not just give out reprimands. And last month, a grand jury took the rare step of indicting Jackie Johnson, the district attorney who first handled Arbery’s case. Voters had already kicked her out of office.

“The really horrific situation in the Arbery case raised the level of consciousness significantly about what could happen if you have an unethical district attorney,” said Clark Cunningham, a professor at the Georgia State University College of Law.Without more oversight, Cunningham said, he worries about a “crisis of public confidence” in communities’ top prosecutors.

Experts say the fallout in Georgia is an outlier, with prosecutors nationwide rarely disciplined and often easily reelected. One Mississippi prosecutor — whose murder conviction of Curtis Flowers, a Black man, was overturned when the U.S. Supreme Court determined he stacked the jury with White people — has not received even a public reprimand from his state bar.

In recent years, advocates seeking to combat racial inequality and mass incarceration have set their sights on district attorneys’ offices, electing reform-minded officials to change who makes key decisions about crime and punishment.

But amid the growing scrutiny of prosecutors in Georgia, those preaching reform there disagree on how exactly to hold district attorneys accountable.

Initially supportive of a prosecutor oversight commission, Democratic legislators in Georgia largely turned against the idea after liberal district attorneys sounded alarms about the potential for political meddling. They warned, for instance, that Republican leaders could use greater oversight powers to crack down on liberal prosecutors’ decisions not to target lower-level crimes such as marijuana possession.

“Atlanta is different than Cordele, where I work, and prosecutors there need the discretion to handle cases differently,” said Brad Rigby, head of the Georgia district attorneys’ association. The group formed a committee to revise prosecutor standards last summer, soon after Arbery’s case became national news.

District attorneys are supposed to beheld accountable mainly through elections, experts say. But once these officials win office, they are typically hard to dislodge.

“Incumbent prosecutors who run for reelection win their races at a higher rate than state legislators, at a higher rate than mayors, than governors,” said Ronald Wright, a law professor at Wake Forest University, who has studied the issue. “If an incumbent wants to return to office, normally they can.”

Prosecutors have broad discretion to decide what charges to bring and who gets prosecuted. Wright believes that of all of district attorneys’ considerable powers, the most important one is “the power of inaction.”

“That’s the moment when everybody else stands back and says, ‘You know, it’s in your hands,’” he said.

Voters have ousted district attorneys after especially controversial cases: The top prosecutor in Chicago was defeated in 2016 amid intense criticism of her decision to wait more than a year to bring murder charges against the police officer who shot and killed Laquan McDonald.

But public outcry is no guarantee of change. Doug Evans, a Mississippi district attorney, was reelected in 2019 despite court findings of misconduct and extensive scrutiny in a popular podcast. He ran unopposed.

Earlier that year, the Supreme Court had reversed the conviction of Flowers, who spent nearly half his life on death row as Evans tried him six times for the same murders. Evans did not respond to a request for comment.

At one point in Flowers’ case, Justice Samuel A. Alito Jr. wondered: Why had the state attorney general’s office never intervened? An assistant attorney general’s answer reflected another barrier to oversight: They legally could not take over the case unless Evans recused himself.

Prosecutors can face professional rebukes and state bar investigations, but those are not very effective punishments, said Carissa Byrne Hessick, a law professor at the University of North Carolina and author of “Punishment Without Trial,” a new book about plea bargaining.

“There’s been a lot of complaints that if you don’t have a really high-profile incident of misconduct, the state bars won’t act,” she said.

No clear trend has emerged in debates about the best way to ramp up accountability and oversight for prosecutors, Wright said. In New York earlier this year, then-governor Andrew M. Cuomo (D) signed into law a measure creating a panel to investigate complaints about prosecutors. A judge struck down a previous attempt as unconstitutional after a prosecutors’ association sued.

In Connecticut, lawmakers this year introduced a bill that pitched increasing accountability by publishing mandatory reviews of prosecutors’ actions online, among other measures. That proposal drew pushback from state attorneys, who wrote in a letter that Connecticut had already “struck a balance between independence and accountability by ensuring that prosecutors are the most heavily regulated attorneys practicing in the state.”

The bill did not make it beyond the committee this year, but its sponsors — two Democratic state representatives — hope to reintroduce the proposal during the next legislative session early next year.

The heightened focus on prosecutors is part of a surge in public attention to the justice system and its decision-makers, said Melissa D. Redmon, a former prosecutor and a clinical assistant professor at the University of Georgia’s law school.

“A lot of people, a few years ago, if you asked what a prosecutor does, what a district attorney does, or what a solicitor general does, wouldn’t be able to tell you,” Redmon said.

“The more the general public understands what prosecutors do and how they do it, I think you will see more scrutiny, and prosecutors being held to a higher ethical standard,” she added.

Activists say that’s what happened in Glynn County, where Arbery was killed.

Allegations of prosecutorial misconduct against Johnson, the first prosecutor on the case, go back to her first year as Brunswick Judicial Circuit district attorney. The Atlanta Journal-Constitution and Channel 2 Action News found that Johnson gave the police remarkable special treatment after the 2010 fatal shooting of Caroline Small, sharing her case with the defense ahead of grand jury proceedings and agreeing not to offer charges unless jurors asked. No one was indicted in the police killing that a former Georgia Bureau of Investigation agent called “the worst one I’ve ever investigated.”

Bill Atkins, a lawyer who represented Small’s family, said he took his concerns about Johnson to the state attorney general’s office. But that went nowhere. Prosecutors also have absolute legal immunity, meaning people cannot sue them over their decisions. Johnson coasted to reelection, facing no serious challengers over a decade.

Then, in February 2020, Arbery was shot as he ran a couple of miles from home.

Johnson recused herself from the case — one of the defendants, former police officer Greg McMichael, had recently retired from her office. But before writing to the Georgia attorney general for a replacement, she brought in Waycross Judicial Circuit District Attorney George Barnhill, who Arbery’s family would also argue had a conflict of interest.

The day after Arbery’s killing, Barnhill told police there were no grounds to arrest McMichael, his son Travis McMichael or their neighbor William “Roddie” Bryan. Weeks later, the prosecutor laid it out once more to police as he recused himself: The suspects were carrying out a valid “citizen’s arrest,” he argued, when Arbery grabbed Travis McMichael’s gun and “initiated the fight.”

The defendants have pleaded not guilty and said they chased Arbery believing he was behind break-ins.

Fellow prosecutors publicly rebuked Barnhill for weighing in on the case while recusing. But the Georgia bar reports no public discipline against Barnhill, who declined to comment on Arbery’s case as it proceeds.

Johnson lost to an independent candidate in the November 2020 election. Then, last month, she was indicted on charges she violated her oath of office by showing “favor and affection” to Greg McMichael and failing to treat Arbery and his family “fairly and with dignity.” She also was charged with obstructing police by directing that Travis McMichael not be arrested.

“I hope it sends a message to district attorneys throughout the state that somebody’s paying attention,” said Atkins, the lawyer who represented Small’s family.

Others question the charges. Defense attorney Don Samuel — who declares himself no “fan” of Johnson and has gone up against her in court — said he thinks they set a dangerous precedent.

A former president of the Georgia Association of Criminal Defense Lawyers, Samuel worries the indictment sends a message that prosecutors who don’t immediately arrest people — opting to wait for further investigation — could be criminally liable.

“A lack of dignity is a crime?” he said. “In the criminal justice system? It’s unheard of.”

Johnson could notbe reached, and her lawyers did not respond to requests for comment. She has denied any wrongdoing in Arbery’s case.

Two other Georgia district attorneys were recently indicted, fueling the push for heightened scrutiny. Paulding County District Attorney Donald Donovan is accused of bribing a fellow prosecutor, among other offenses, and Chattahoochee Circuit District Attorney Mark Jones is charged with offering bribes to members of his office, attempting to influence a police officer’s testimony and trying to block the testimony of a crime victim.

Fulton County District Attorney Fani Willis also recused herself from last year’s police shooting of Rayshard Brooks in Atlanta, citing her predecessor Paul Howard’s handling of the case. Critics said Howard, the subject of multiple state probes, brought charges too quickly and should not have used video from the case in campaign ads.

Working on the state disciplinary board for lawyers, Boston said, “there were some red flags in many areas that I said we really need to look at. For the sake of our profession, for the sake of our standing as ministers of justice.”

The state Supreme Court still needs to weigh in on the rule revisions. Among the changes: A statement that prosecutors should “promptly disclose” or investigate credible evidence of a wrongful conviction and then act if the person is clearly innocent.

Activist Shemeka Frazier Sorrells — who helped found a local social justice advocacy group, A Better Glynn, after Arbery’s death — is already thinking ahead to the next district attorney’s election. She said she is trying to convince people that Johnson’s replacement in office was just a “short-term win.”

The real goal, Sorrells said, is for Glynn County to have a choice next time they pick a prosecutor. Otherwise, she said, “we’re still in the same situation.”