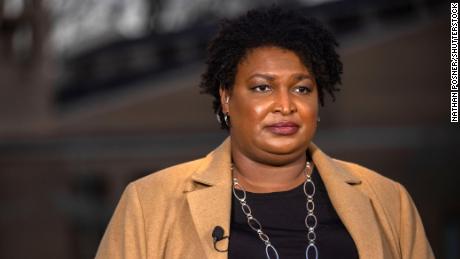 (CNN)Stacey Abrams’ stark warning about Georgia’s new election bill being racist is shining a spotlight on a nationwide battle over whose voices will be heard at the ballot box, as Republicans around the country try to suppress voting rights.The Georgia Democrat’s comments on CNN Sunday come amid a building showdown over GOP efforts to make voting harder in multiple states following former President Donald Trump’s loss and his lies about ballot fraud, and Washington Democrats’ vast federal election and civil rights bill that would counter such efforts. Flurries of bills have been introduced in the key battleground states that decided the 2020 election and were the focus of Trump’s attempts to undermine it, but Republicans are also ramping up in Texas and other strongholds that Democrats have lately tried to challenge.Abrams, the 2018 Democratic gubernatorial nominee in Georgia and a voting rights activist who helped President Joe Biden become the first Democrat in nearly three decades to carry the state, has been in the trenches, getting people out to exercise a right that is again under threat.The clashes over who can vote, where and when could define the future of America’s political system and therefore represents one of the most important issues currently before the country. Many of the disputes between Republicans and Democrats concern rules and procedures that were introduced to make voting — the core and vital bedrock of a democratic system — easier and more universal amid the pandemic. Content by The Government of Japan Why Japanese heritage is so important to international residents. Intercultural exchanges are sustaining traditional Japanese culture in a period of increasing globalization.

Abrams was asked about Georgia state bills that would end automatic voter registration and limit voting by mail and Sunday voting, all steps that experts say disproportionately target Black voters who tend to vote for Democrats.”I do absolutely agree that it’s racist. It is a redux of Jim Crow in a suit and tie,” Abrams told CNN’s Jake Tapper on “State of the Union,” referring to historic state and local laws that institutionalized racism and segregation in the 19th and 20th centuries.”The only connection that we can find is that more people of color voted and it changed the outcome of elections in a direction Republicans do not like,” Abrams said, referring to recent elections in Georgia that helped President Joe Biden win the White House, handed Democrats control of a 50-50 Senate and delivered the only red-to-blue House district flip that wasn’t because of redistricting.Efforts to curtail Sunday voting particularly target Black voters. The Christian Sabbath is traditionally important to Democrats as African American churches organize voter drives after weekly services. Attempts to shorten voting hours, meanwhile, often lead to long waits that are likely to depress turnout in cities where Democratic voters live.Abrams, the former state House minority leader who’s regarded as a likely 2022 gubernatorial candidate, is not the only key political figure in the Peach State to condemn the bills moving through the state house. Republican Lt. Gov. Geoff Duncan agreed that the bills deliberately target Black voters. “I’m very sensitive to that,” Duncan said on NBC’s “Meet the Press.””There (are) a lot of solutions in search of a problem. Republicans don’t need election reform to win. We need leadership,” Duncan said. “I think there’s millions of Republicans waking up around the country that are realizing that Donald Trump’s divisive tone and strategy is unwinnable in forward-looking elections.”

A flurry of voter suppression

Georgia is not alone in seeing a fight to define election laws for political advantage.In Texas, a new Republican bill seeks to limit who can vote by mail. Republican Gov. Greg Abbott plans to hold a news conference on what he calls “election integrity” on Monday. Republicans in Arizona, which Trump lost narrowly to Biden, are seeking to restrict the vote-by-mail system and cut back on early voting. Iowa’s Republican Gov. Kim Reynolds has already signed a new bill that makes it harder to vote early. Many of these efforts appear to be attempts to make life more difficult for diverse electorates that tend to favor Democrats.These efforts are taking place against the volatile backdrop of once-in-a-decade redrawing of congressional districts, which is always a fraught process and will be especially divisive this time around after Trump’s single term left the country and its state and local politicians even more polarized.Trump’s false claims about vote fraud in 2020 are meanwhile already shaping the 2022 midterm elections and the 2024 presidential vote. The former President is using his vast popularity in his party to effectively condition his endorsement on candidates accepting his false version of reality. At the Conservative Political Action Conference last month, Trump demanded citizen tests for ballot access, said voting should only take place on Election Day and said independent judges should be barred from adjudicating voting disputes.”The Republicans have to do something about it,” Trump said. In support of the ex-President, 145 Republican lawmakers in Washington — including a majority of the House GOP conference — refused to vote to certify Biden’s victory, despite there being no evidence of voter fraud or widespread irregularities in November. Thus, large swathes of the Republican Party, which once touted its triumph over communism in the Cold War, have now turned against American democracy itself. This scenario is the reason why many voting rights campaigners consider the coming months vital for the preservation of the most fundamental right of a citizen — voting. It also explains why the fight to save American democracy, which was left reeling but intact by Trump’s presidency — will go on even though the former President has left office.

Republicans say voters have lost confidence in the system

National and local Republicans justify their push to restrict access to the ballot by arguing that after the last presidential vote, millions of Americans have lost confidence in the process. But those doubts are largely fueled by a campaign of lies by Trump and the conservative media about the last election, which were abetted by many GOP office holders who helped stir the hysteria that incited the deadly US Capitol insurrection.Trump’s claims were rejected by multiple judges and refuted by his own Justice Department, which means that this effort by Republicans, who have failed to win the popular vote in seven of the last eight presidential elections but have nevertheless controlled the Senate for long periods and built conservative dominance on the Supreme Court, looks like an attempt to use election laws to enshrine minority rule.Democrats view their best chance to fight back as H.R. 1, or the “For the People Act,” a huge voting rights bill that has already passed the Democratic-controlled House and is awaiting action in the Senate. The measure is at the center of controversy as some Democrats argue that its importance justifies either the removal or the modification of filibuster rules that allow minority Republicans to kill major legislation by requiring a 60-vote supermajority.Abrams argued on “State of the Union” that a total overhaul of the filibuster, which Biden and several moderate Democrats oppose, is not necessary to get the bill through the Senate.”I don’t believe that it’s necessary to wholly eliminate the filibuster to accomplish the purposes of passing these bills,” Abrams said, suggesting a similar carveout from the filibuster as applies to confirming Cabinet and Supreme Court nominees. Abrams also rejected Republican claims that H.R. 1 represents an unlawful power play by liberals that crushes state power.”The elections clause in the Constitution guarantees that the Congress alone has the power to regulate the time, manner and place of elections. That is a power that is sacrosanct,” Abrams said.The “For the People Act” takes the opposite approach to most of the Republican electoral bills in the states. It would create automatic voter registration nationwide, expand voting by mail and reverse restrictions on voting hours imposed by states. The bill would end partisan gerrymandering of congressional districts — the practice of drawing seats that has protected incumbents and tended to radicalize both parties in Washington. It also requires organizations to disclose the names of all their big donors and introduces new security measures to protect American elections following assaults on the process by foreign powers. In another change to campaign finance practices for congressional elections, the measure would also give federal candidates as much as a 6-to-1 match of public funds for small donations to spur more grassroots giving.

Texas GOP Sen. John Cornyn on Sunday blasted the “For the People Act” as a “hijacking of state and local election laws.””This is a power grab. It’s that simple,” Cornyn said on “Sunday Morning Futures” on Fox News, urging moderate Democrats to intervene to stop a gutting of the filibuster rules.”A lot of this is going to depend on how strong people (are) like Joe Manchin and Kyrsten Sinema, two senators who said they oppose eliminating the requirement of 60 votes in order to pass things in the Senate,” Cornyn said, referring to Democrats from West Virginia and Arizona.When the bill passed the House, Oklahoma GOP Rep. Tom Cole argued against it by saying that it would federalize elections in a way that was not consistent with the republican structure of the country and said its changes to campaign finance law would amount to a “federally funded campaign ATM.”Abbott, who is calling for new measures to tighten mail-in ballot procedures, plans to hold his news conference on Monday alongside state Sen. Paul Bettencourt, who is a co-sponsor of bills that would require more extensive documentation for voter registration and require uniformity on voting hours and days for all Texas counties. Such moves could centralize power in Austin and take discretion away from jurisdictions like Harris County — a key Democratic stronghold around Houston — to set their own voting hours and other balloting rules.Also speaking on Fox News on Sunday, Abbott warned that if the “For the People” Act passes the Senate, the vote would only mark a new phase of the battle to control how and when America votes.”Before I was governor, I was the attorney general of Texas. And when the Obama administration tried doing things like this, I filed 31 lawsuits against the Obama administration,” Abbott said, before making a series of unproven claims that mail-in voting is “one of the easiest ways to cheat in elections.””The strongest tool that we have is the litigation tool,” Abbott said, raising the eventual prospect that a conservative Supreme Court — led by Chief Justice John Roberts, who has a long been willing to challenge voting rights laws — could have the final say on the fight to preserve American democracy.