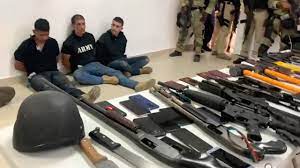 The Miami Herald and the McClatchy Washington Bureau have learned that the suspect is Joseph Gertand Vincent, first arrested more than 20 years ago for filing false information on a U.S. passport application and who went on to become an occasional DEA informant.

Vincent, 55, was identified by Haitian authorities over the weekend as an arrested suspect along with another South Florida Haitian emigre named James Solages, 35, who until April was a maintenance director in a Lantana senior-living center. Both men told investigators they were hired as translators

Information swirled for days, some of it first reported by the Miami Herald, about the DEA’s tie to Vincent, and late Monday the DEA confirmed only that a former informant was among the arrested in Haiti. The subject apparently reached out to the DEA following Moïse’s killing, alerting officials to his link and forcing the DEA to reveal one of its sources — an exceptional development.

A source close to Vincent, speaking on the condition of anonymity because of the volatile situation in Haiti, which has asked for a U.S. troop presence, confirmed that the South Florida man was indeed once an informant for the DEA. Another news source, also demanding anonymity, said Vincent went by the pseudonym Oliver.

Agency officials would not confirm the identity of the source that they were acknowledging in unusual fashion.

“A DEA official assigned to Haiti urged the suspect to surrender to local authorities and, along with a U.S. State Department colleague, shared information with the Haitian government that assisted in the surrender and arrest of the suspect and one other individual.”

The DEA announcement is even more stunning because of reports in Haiti that the attackers who killed the president shouted through a loudspeaker that a DEA raid was taking place. The DEA steadfastly denies any knowledge of or involvement in the monumental events that unfolded in impoverished Haiti.

“DEA is aware of reports that President Moïse’s assassins yelled ‘DEA’ at the time of their attack. These individuals were not acting on behalf of DEA,” said the source.

Interim Haitian Police Chief Léon Charles said Sunday that among the items police found in the home of Christian Emmanueal Sanon, an alleged mastermind of the plot, was a hat with DEA written on it and a cache of arms and ammunition.

Sanon is a medical doctor who had worked in the Boynton Beach area. He appears in numerous online videos criticizing the Haitian government. Officials in Haiti allege Sanon hoped to be installed as president of Haiti in the aftermath of the assassination. Solages and Vincent both have said they were not part of any mission to kill the president.

The Justice Department on Monday night issued a statement saying the agency’s initial assessment of the assassination has been completed.

“An initial assessment has been conducted in Haiti by senior U.S. officials. The department will continue to support the Haitian government in its review of the facts and circumstances surrounding this heinous attack,” said Anthony Coley, a DOJ spokesman. “The department will also investigate whether there were any violations of U.S. criminal law in connection with this matter.”

None of the three South Florida suspects appear to have been assigned a lawyer yet, and they have not been made available for interviews. Their version of events, or those offered by the Haitian government cannot be independently confirmed.

The source close to Vincent said the West Palm Beach man worked as a paid informant who helped the DEA facilitate the arrests of drug-trafficking targets, including the infamous Guy Philippe in early 2017.Play VideoDuration 1:47Suspects arrested in connection with Haitian president’s killingHaïti National Police said with the population’s help they captured 17 suspects in the assassination of Haitian President Jovenel Moïse. They are currently looking for 8. On Thursday authorities presented 15 of the 17 suspects they arrested. BY JACQUELINE CHARLES

Philippe, who had been wanted for more than a decade in the United States, was arrested in January 2017 in Haiti. Federal DEA agents brought Philippe, then 48, on a plane to Miami. A source familiar with that operation confirmed that Joseph Vincent was with the Haitian National Police officers when they turned over Philippe to DEA agents for the flight to Miami.

The ex-rebel leader, charged with drug trafficking by the U.S. Attorney’s Office in Miami under a 2005 sealed indictment, had just been elected to a six-year term in the Haitian parliament as a senator from the Grand’Anse area of Haiti.

His arrest came four days before newly elected lawmakers were set to be sworn in. As a senator, Philippe would have been entitled to immunity from arrest or prosecution during his term in office.

Once in custody, Philippe tried to have his indictment dismissed on the basis of his immunity — to no avail. He eventually pleaded guilty to the drug-trafficking conspiracy charges and was sentenced to nine years in prison.

Philippe’s leadership in a 2004 coup d’état against then-President Jean Bertrand Aristide led to the president’s ouster, and Human Rights Watch accused him of overseeing unlawful killings. In the aftermath, Philippe — along with other Haitian police officers, politicians and drug traffickers — became entangled in the U.S. crackdown on Haiti as a narcotics hub for Colombian cocaine.

After the guard’s conviction in 2005, he played a pivotal role as a cooperating witness, including in the investigation of Aristide himself, though the former president was never charged. The guard, Oriel Jean, was assassinated in 2015 after returning to Haiti.