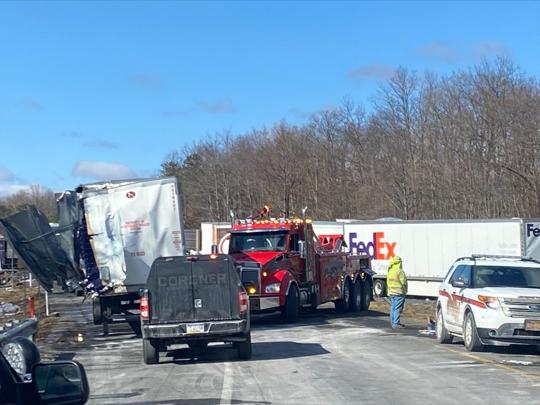 POTTSVILLE, Pa. – 69 News has learned that 5 people are dead from injuries sustained in a collision involving more than 50 vehicles that closed a portion of I-81 on Monday. The pileup sent at least 20 more people to area hospitals.

It was just after 10:00 a.m. Tuesday that the coroner was back on scene of the massive pileup.

Dr. David J. Moylan, the Schuylkill County coroner, said he suspects there could be more victims as the investigation continues.

The crash in northeast Pennsylvania happened around 10:30 a.m. Monday. John Blickley, the deputy emergency management coordinator for the agency, said officials believe a snow squall clouded visibility and likely contributed to the accident.

24 people were taken to four area hospitals, Blickley said. State police say there were an estimated 50 to 60 vehicles involved.

PSP say crews have cleared about 40% of the crash scene.

“We are still tearing it apart, until we get all vehicles out of here and get it all documented,” said Trooper David Beohm, Troop L, Pennsylvania State Police.

The Northbound detour continues. I-81 North is closed from exit 107 to exit 119.

PSP says clearing the wreckage is a slow process.

“We go through a vehicle and then we have to look to make sure there’s not somebody in there. That can be very painstaking,” continued Trooper Beohm.

The road will likely be closed most of the day Tuesday.

State Police say crews were working for hours to put out fires with water pumped from an overpass above the highway.

As video of the crash continues to circle online, Trooper Beohm has a bold message.

“The last thing you should be doing if your car crashes, you have to make a decision. Am I going to stay in the car? It’s not black and white. If you’re out of the car, run up in the woods. The last thing you want to do is get your phone out and record cars crashes into each other. One of those cars, if it hits you, it’s going to kill you. We don’t need to see the video,” said Trooper Beohm.

Drivers who were not taken to the hospital were taken to a Wegman’s Distribution Facility that was a convenient nearby location for emergency crews.