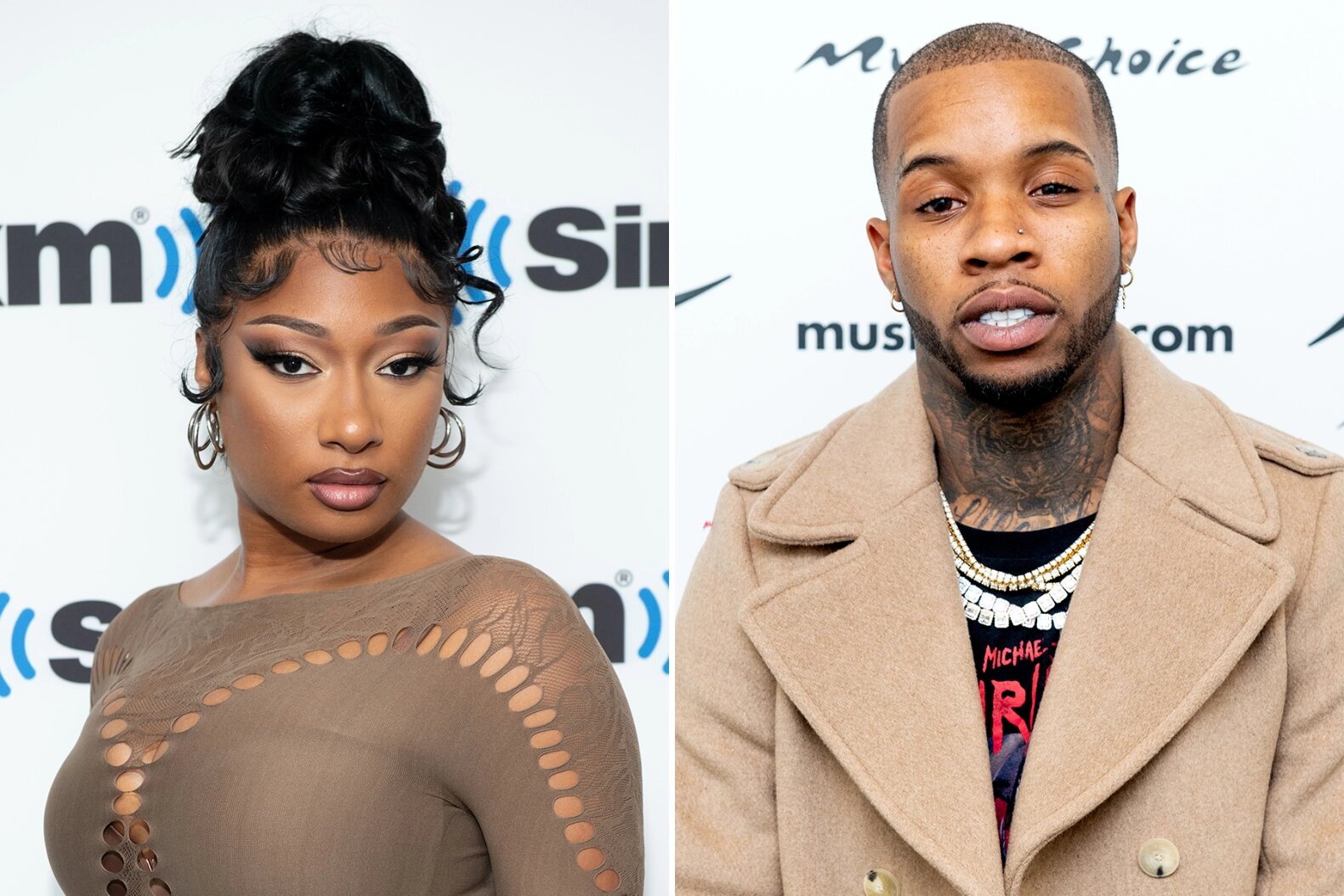 A Los Angeles jury convicted Tory Lanez on all three counts Friday, and then pandemonium erupted in the courtroom

RAPPER TORY LANEZ was found guilty Friday of shooting music superstar Megan Thee Stallion in both feet during an alcohol-fueled curbside confrontation in the predawn hours of July 12, 2020.

After seven hours of deliberations, a Los Angeles jury convicted the “Luv” singer on all three counts, finding that he assaulted Megan with a semi-automatic firearm, causing great bodily injury, discharged the weapon with gross negligence and possessed the concealed, unregistered weapon inside his SUV.

Lanez, whose legal name is Daystar Peterson, is facing up to 22 years and eight months in prison at his sentencing set for Jan. 27. He’s also facing subsequent deportation since he’s a citizen of Canada.

“The jury got it right. I am thankful there is justice for Meg,” said Megan’s attorney Alex Spiro.

“I want to start by highlighting the bravery of Megan,” District Attorney George Gascón added. “You showed incredible courage and vulnerability with your testimony despite repeated and grotesque attacks that you did not deserve. You faced unjust and despicable scrutiny that no woman should ever face and you have been an inspiration to others across LA County and the nation.”

The verdict followed a nine-day trial during which Megan told jurors she was trying to escape a shouting match inside Peterson’s Cadillac Escalade when she heard the rapper say “Dance, bitch!” and turned to see him pointing a 9mm semi-automatic pistol at her.

“I’m in shock. I’m scared. I hear a gun going off. I couldn’t believe he was shooting at me,” she testified in the packed courtroom. “He was holding the gun, pointing it at me.”

The Grammy winner, 27, said she dropped to the ground and crawled to a nearby driveway. “I looked down at my feet, and I see all the blood,” she said. “Now everybody’s screaming. He looked shocked.”

Pandemonium erupted in the courtroom Friday shortly before Peterson was led away in handcuffs. His father, Sonstar Peterson, screamed, “This wicked system” after jumping up from the front row where the rapper’s young son also was seated. “You two, you are wicked, you are evil,” he shouted, pointing at the prosecutors before he was forced out of the courtroom.

“We are shocked by the verdict. There was not sufficient evidence to convict Mr. Peterson. We believe this case was not proven beyond a reasonable doubt. We will be exploring all options including an appeal,” offered Peterson’s defense lawyer George Mgdesyan.

Over more than three hours of excruciating testimony last week, Megan described her “terrified” reaction to the attack and the fear and confusion that followed.

The “WAP” singer said she became complicit in a coverup when she initially told investigators she was bleeding profusely because she stepped on glass. She said Peterson had apologized and begged her to keep quiet as sirens approached.

“He’s saying, ‘Please don’t say anything. I’ll give y’all a million dollars. I can’t go to jail. I already got caught with a gun before,’” she testified.

During closing arguments Wednesday and Thursday, Mgdesyan branded Megan a “liar,” telling jurors they should conclude she fabricated the attempted $1 million bribe allegation because she said Peterson also told her he was on probation, which wasn’t the case.

Mgdesyan further argued that his client had gunshot residue on his hands because he was trying to wrestle the gun away from the actual shooter, whom he identified as Megan’s now-estranged best friend Kelsey Harris.

“Whether or not he’s on probation in 2020 doesn’t matter. What matters is that he told Megan he was on probation – because he was manipulating her,” Deputy District Attorney Kathy Ta said in her final rebuttal before the jury started deliberating. “He tries to appeal to her sympathy. ‘I have a gun charge, I’m on probation, please don’t say anything.’ It’s a pattern of manipulation to get the witnesses to keep a lid on everything.”

The two-week trial included head-spinning testimony from Harris, who was present in the Escalade the morning of the shooting and who gave an 80-minute recorded statement to prosecutors in September in which she vividly recalled Peterson firing five shots, leaving Megan wounded on the ground.

Once she was in the courthouse Dec. 14 under a subpoena from prosecutors, Harris invoked her 5th Amendment right against self-incrimination and asked for blanket immunity. Prosecutors agreed to give her “use immunity” instead, meaning her sworn testimony couldn’t be used against her in a future proceeding, but she could still be charged with something based on other evidence.

On the witness stand, Harris disavowed key aspects of her September statement, claiming she didn’t see Peterson open fire and was operating under “assumptions” when she sent three lines of text to Megan’s bodyguard five minutes after the shooting that read: “Help / Tory shot meg / 911.”

While Harris refused to implicate Peterson, she also said it was “ridiculous” for Peterson’s defense to claim she was the shooter. She confirmed that after she, Megan and Peterson left Jenner’s pool party with Peterson’s driver, Jauquan Smith, the group was arguing in the SUV because Peterson revealed he had a prior sexual relationship with Megan after previously being intimate with Harris.

Harris said “a lot of name-calling” broke out, with everyone “taking jabs at each other.” But she was adamant her estrangement from Megan after the shooting was based on her belief no one was defending her amid online accusations she was the shooter.

In her own testimony, Megan said she was rushed into surgery with general anesthesia at a Los Angeles hospital during the height of COVID restrictions. When she woke up with stitches in her feet, she couldn’t walk.

She said Peterson sent her an obvious apology that read: “Meg, I know u prolly never gone to talk to me again, but I genuinely want u to know I’m sorry from the bottom of my heart. And i was just too drunk. Nonetheless, shit should have never happened, and I can’t change what did. I just feel horrible. Cuz I genuinely just got too drunk.”

While on the witness stand, Megan publicly admitted for the first time that she had been intimate with Lanez in the past. She defended her decision to keep that a secret during media interviews, saying the non-exclusive relationship left her feeling “embarrassed,” and ultimately, she considered it irrelevant to the violence that landed her in the hospital.

She told the jury that naming Peterson as her assailant came with a steep price.

“It feels like every man that’s in a position of power in the music industry, even people who are not even rappers, they never cared about what my side of the story was. They immediately took the side of this man and have been giving me hell for the last going on three years,” Megan testified.

“Not a day that goes by where somebody is not calling me a liar or is not shaming me for being a grown woman and having sex,” she testified, saying the “whole story” turned into who she was having sex with.

“I don’t understand why that matters,” she said of the prior sexual relationship with Peterson. She was adamant he was the triggerman, not her former friend Harris. “Tory came out and told so many different lies, about me not being shot, about him not being the shooter, and making this all about a sex scandal.”

Megan said she now deals with a constant barrage of threats and harassment online. She said it left her feeling like a “sick bird” that other members of her industry sought to avoid.

“Because I was shot, I’ve been turned into some kind of villain, and he’s the victim. This has messed up my whole life,” she said, adding that she often gets “depressed” about the way she’s “being shamed” online.

At her lowest, she thought, “I wish he would have just shot and killed me (rather than) have to go through this torture,” Megan told the jury.

In her closing argument, Ta said it didn’t make sense that Megan would frame Peterson if Harris pulled the trigger.

“He is a fellow rapper in the industry. He has the support of the boy’s club. It would have been easier for her to say, ‘My crazy assistant did this to me.’ It is much harder for her to come out against Tory,” Ta argued. “She had to think about it because she was concerned about what it would cost her, and it cost her a lot.”

Ta said the case was “not about anyone’s sex life” and urged jurors to look at the evidence and sworn testimony. She said it was Peterson’s “bruised ego” that led to the shooting. “(Megan) disrespected his rapping. She’s insulting him as a rapper, and that pissed him off. He had a massive ego and he could not handle being disrespected. And how dare she have the audacity to walk away from him. So he reasserted his dominance. He was going to show her.”

“Women, especially Black women, are afraid to report crimes like assault and sexual violence because they are too often not believed,” said District Attorney Gascón. “This trial, for the second time this month (after the Harvey Weinstein conviction), highlighted the numerous ways that our society must do better for women.”