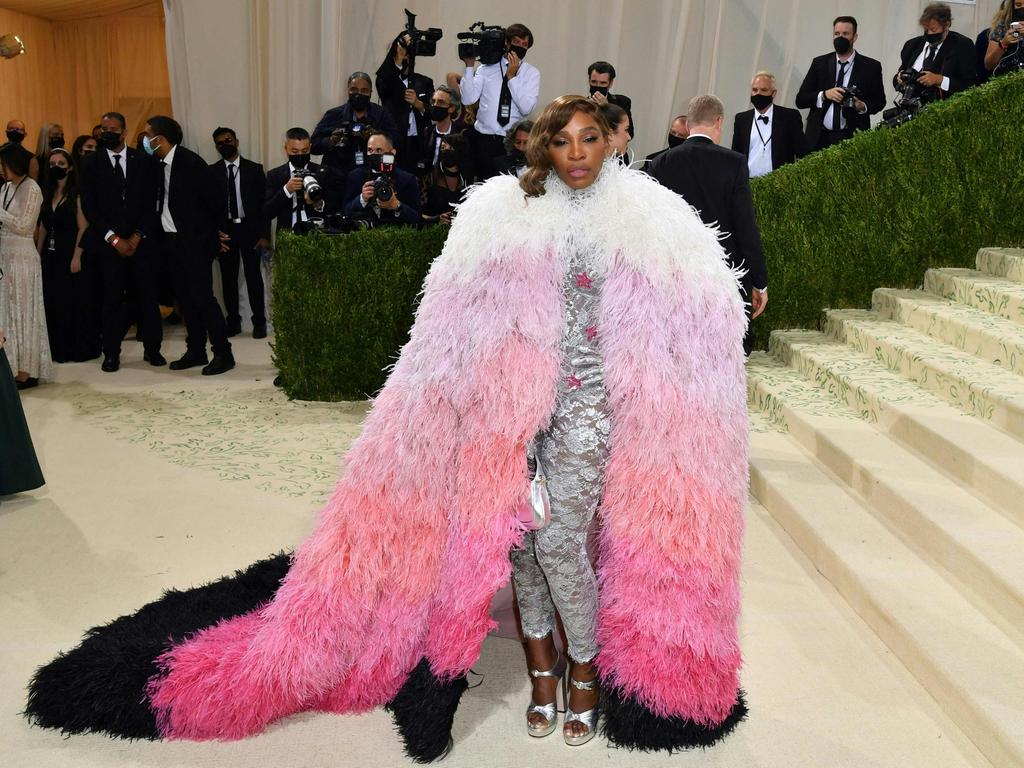 This year’s theme was American Independence. Patriotism, pop culture and politics were in fashion, but to what end? 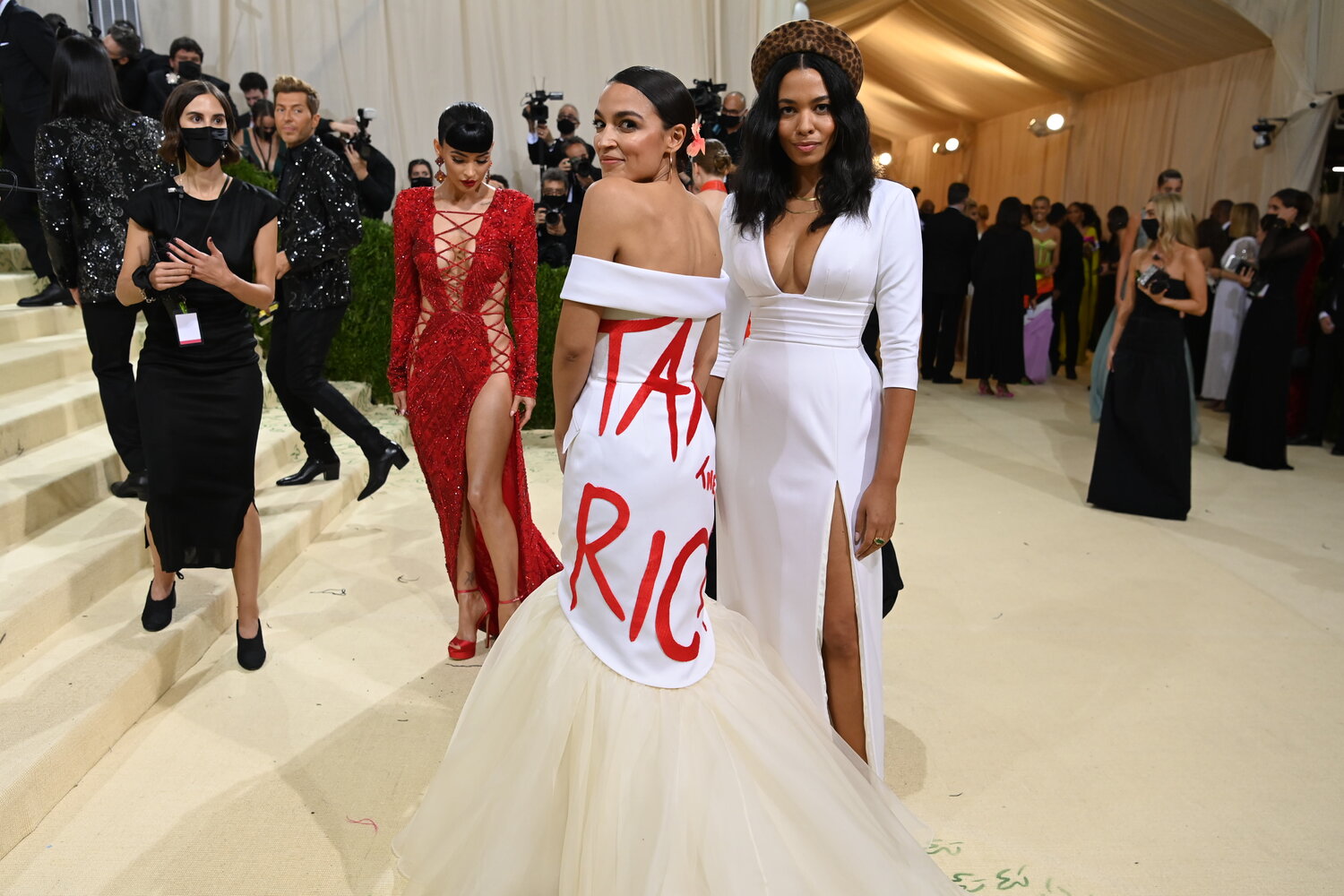 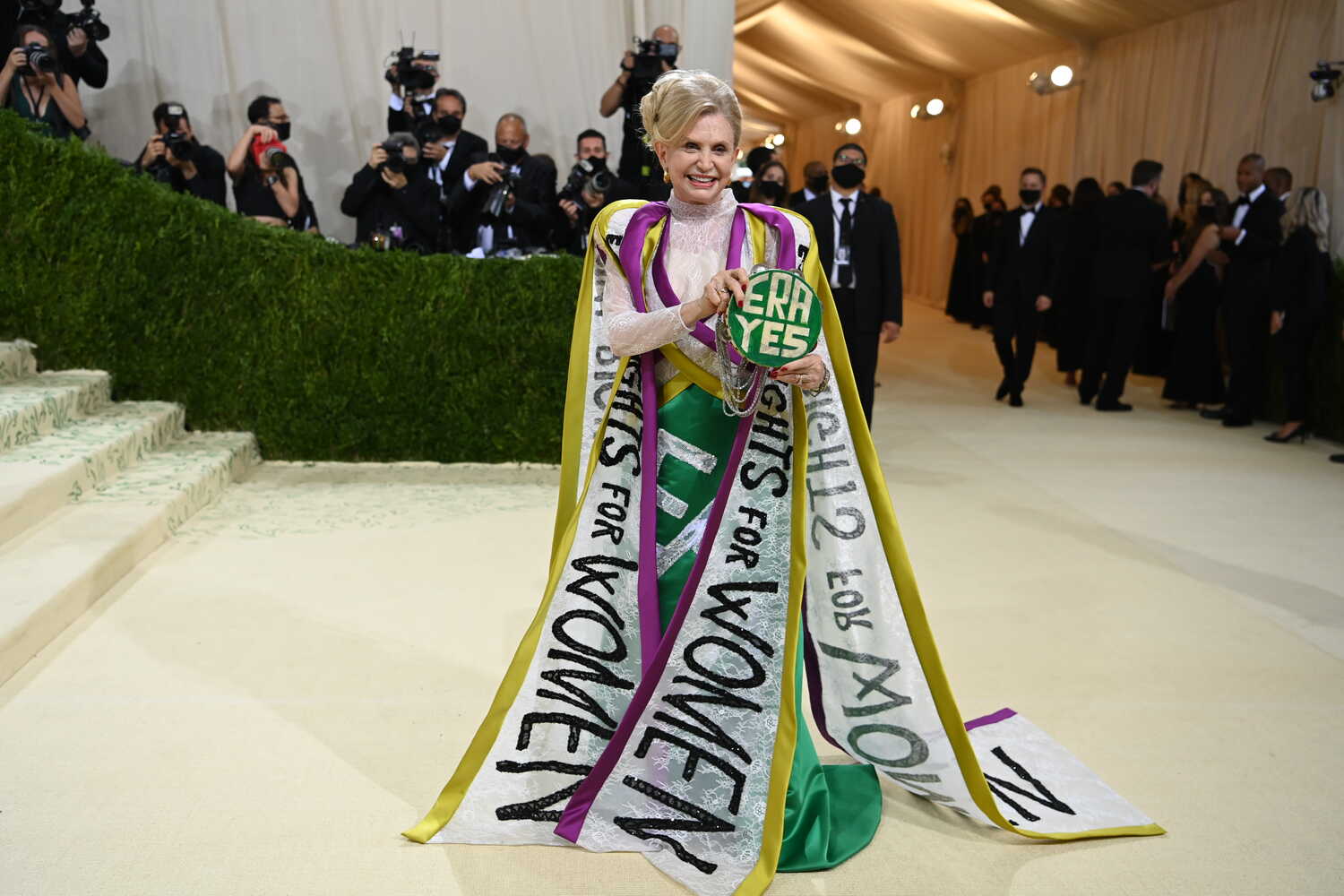 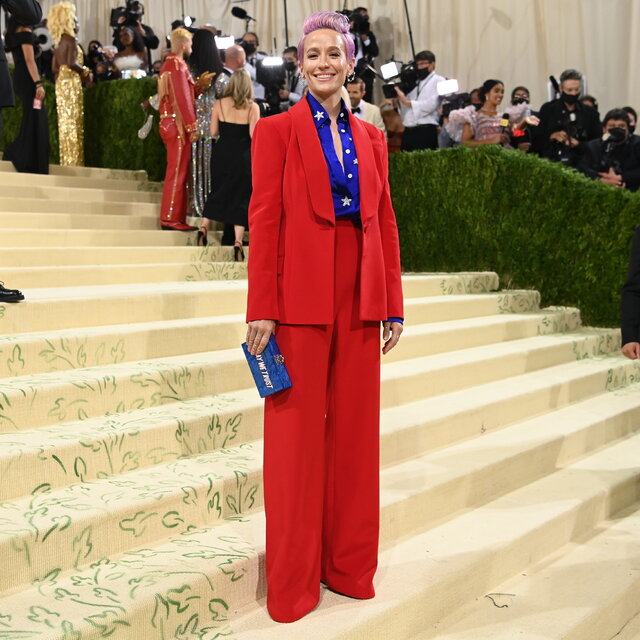 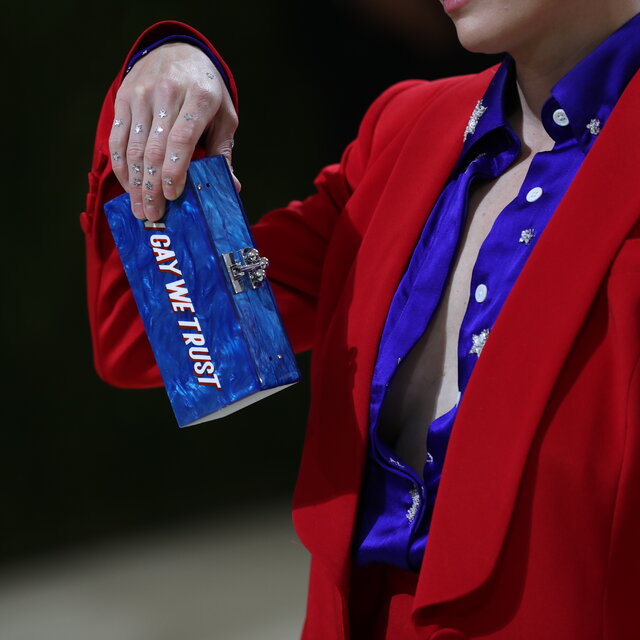 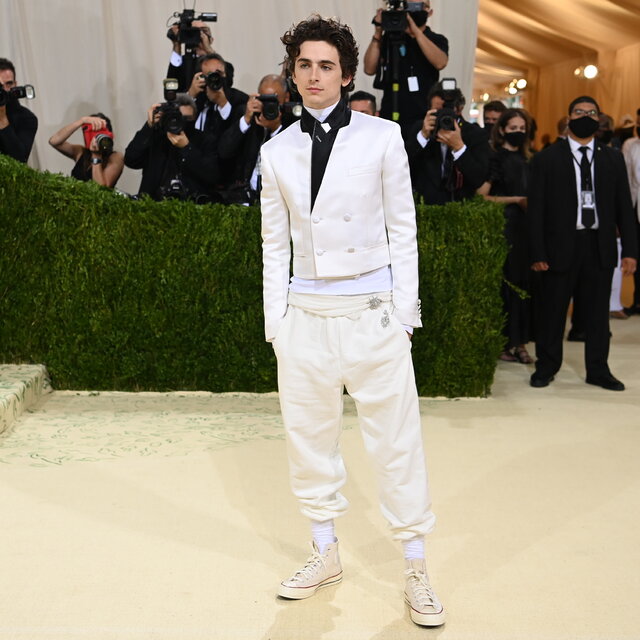 On the second Monday in September, upper Fifth Avenue lit up with a blitz of flashbulbs not seen in over two years.

The Met Gala — like Broadway, like New York Fashion Week, like the U.S. Open — had returned, and with it the extreme pageantry that it inspires as guests and the designers who dress them vie to see who can create the most viral look according to theme.

The dress code this year was “American Independence.” (It was linked to the Costume Institute exhibition it celebrated, “In America: A Lexicon of Fashion.”) What exactly that means is a question George and Martha Washington probably never had to contemplate (even Dolley Madison, the resident founding fashionista, likely didn’t ask), but the gala provided a variety of answers: some obvious, some more pointed, all plumbing the mythology of the country — historical, pop cultural, and just plain fantastical.

Representative Alexandria Ocasio-Cortez of New York, for example, wore her politics on her sleeve — or rather, her back — in a white mermaid dress by Aurora James, founder of Brother Vellies and the 15 Percent Pledge, with the message “Tax the Rich,” scrawled in bright red letters, and a bag to match.

Given that the gala is a cornucopia of capitalist values, full of the rich and famous, that’s independent thinking for you.Open image modal at 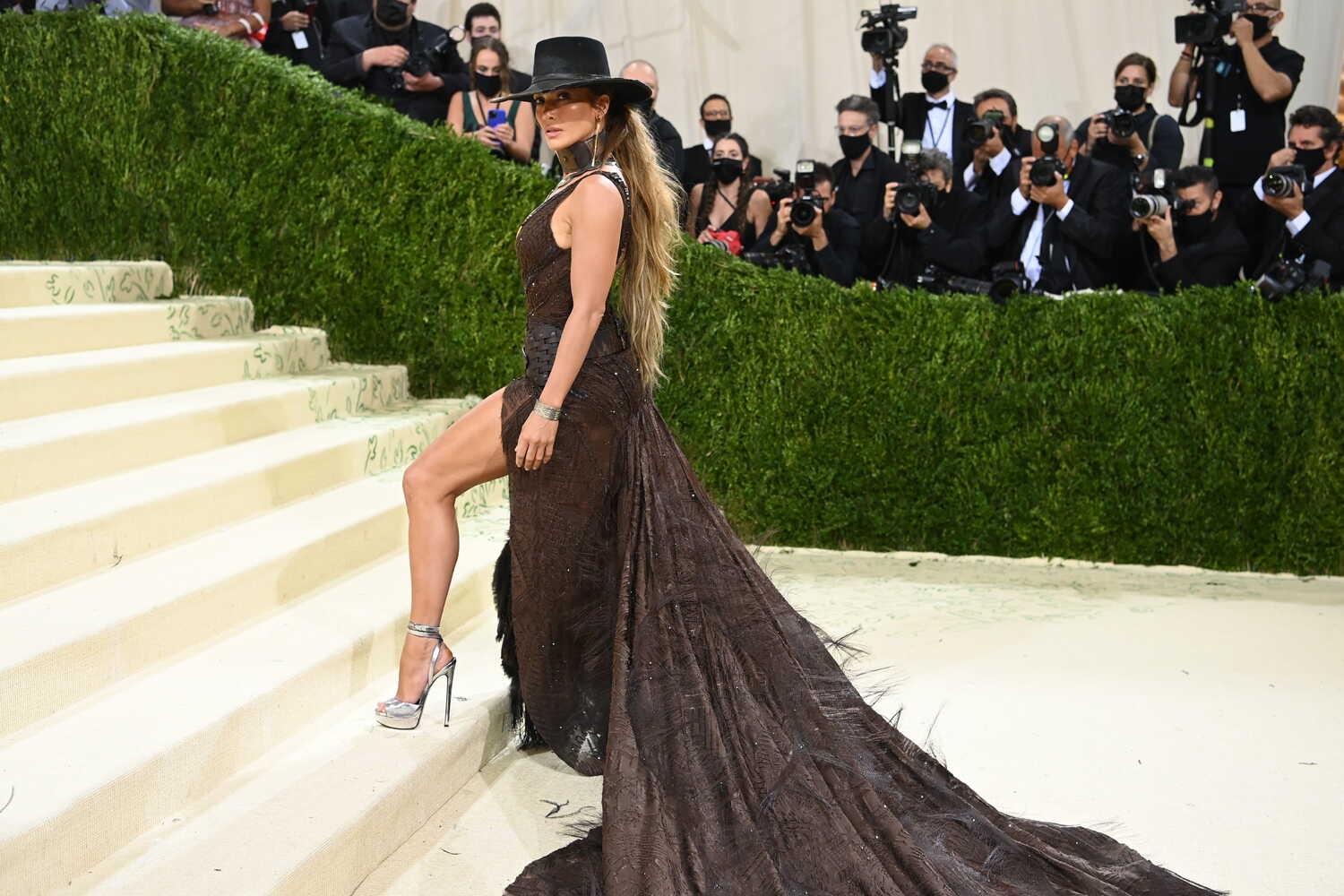 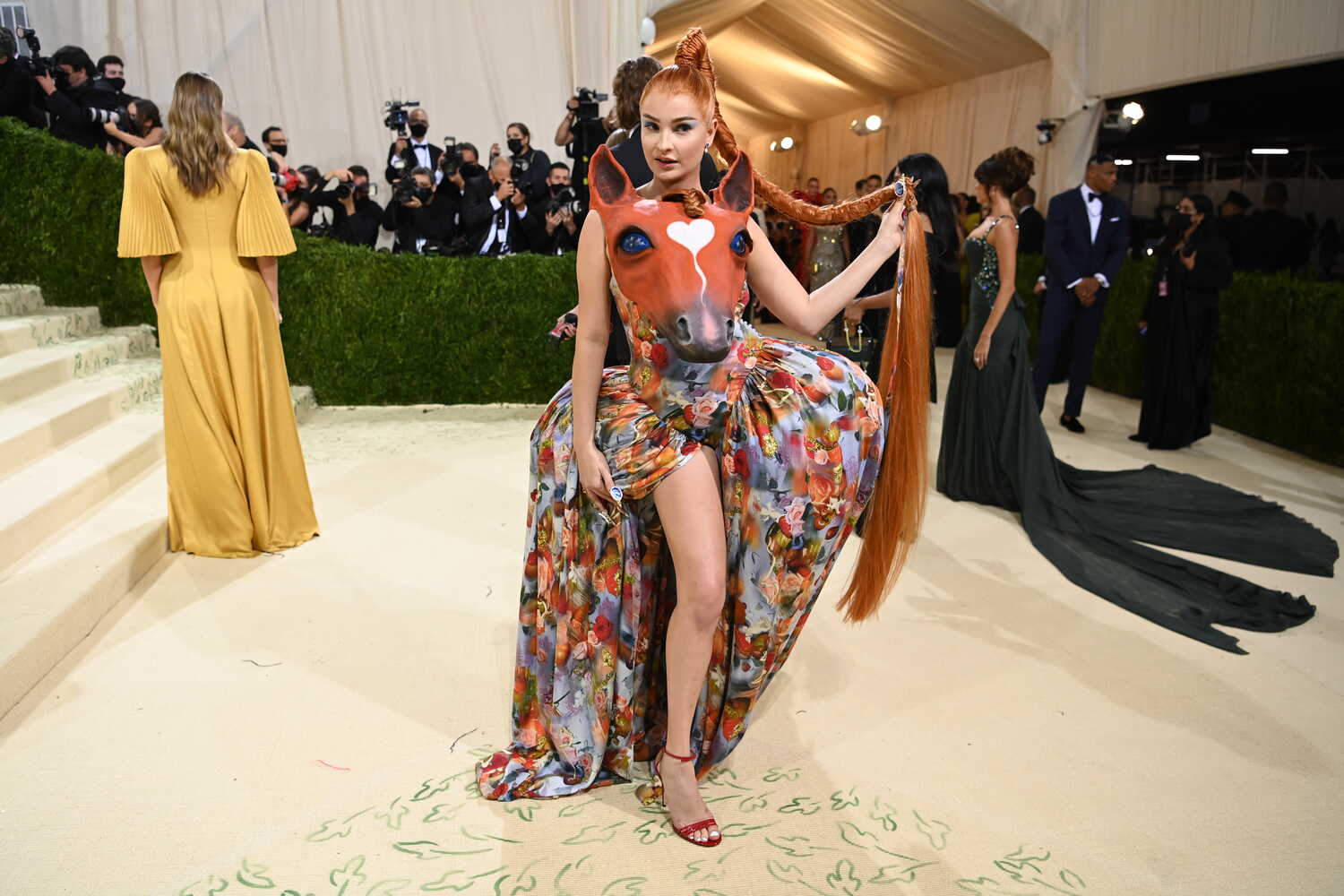 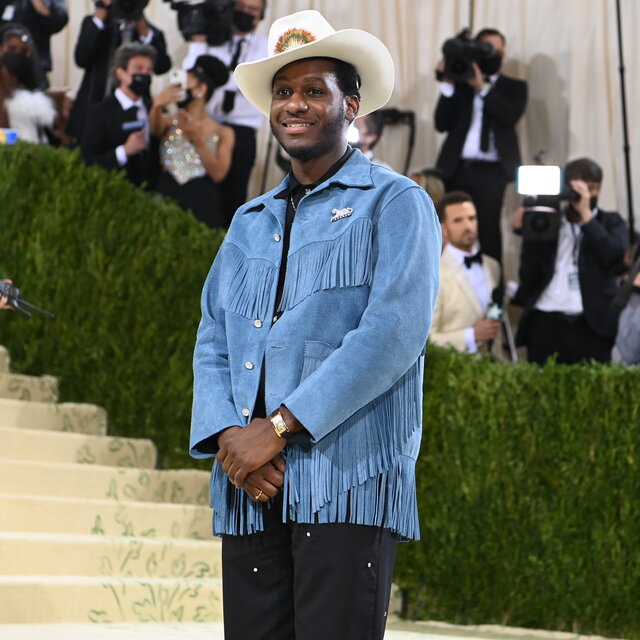 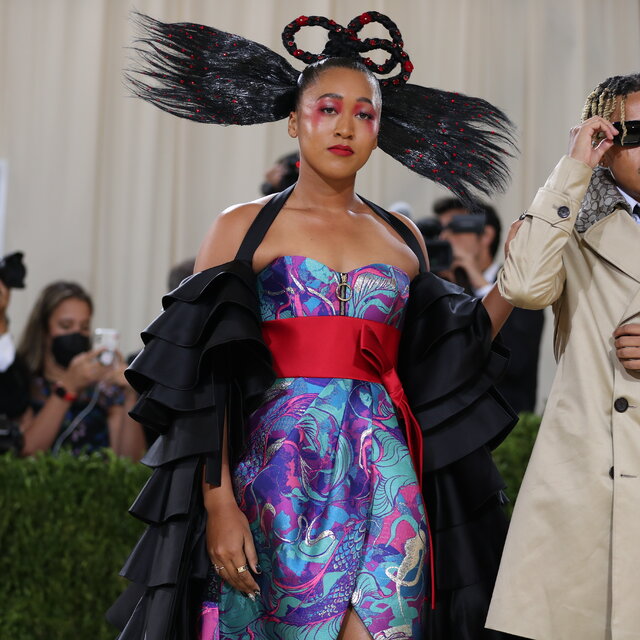 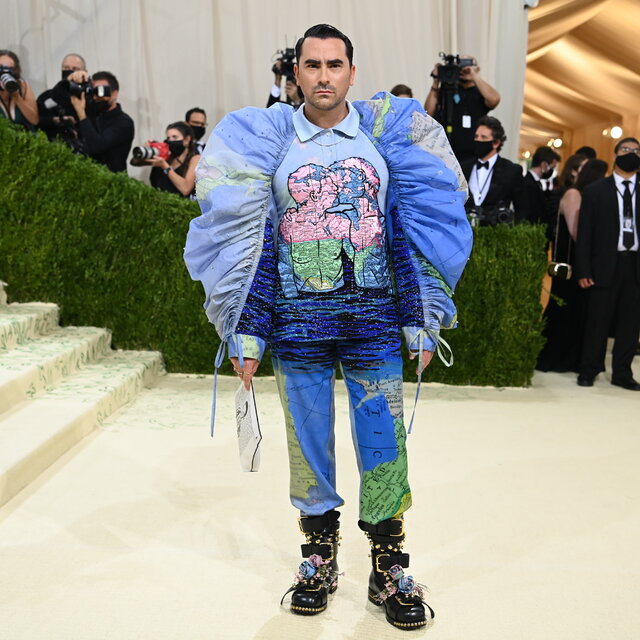 Along with Representative Carolyn Maloney, in a suffragist purple, white and gold gown and cape by Antonios Couture calling for “Equal Rights for Women” and an ERA clutch, Ms. Ocasio-Cortez took the fashion statement idea to a whole new level.

There was a sense, before the gala, that after 2019’s “Camp” theme, which had Billy Porter on a litter borne by six shirtless men and Katy Perry as a chandelier, the costuming for the Costume Institute had gone about as far as it could go, and perhaps the time away had been an opportunity for a reset. Maybe attendees would just honor the occasion by wearing a nicely elegant gown by an American brand, rather than a look that probably flirted with national cliché. Some — like the event’s honorary chairman, Anna Wintour, in floral Oscar de la Renta — did. But as the evening progressed, it became increasingly clear they were in the minority. Besides, many couldn’t, even if they wanted to, because they were the guests of European brands and thus had to also model their clothes. Meaning they had to engage with the theme in more overt ways.

The West was worn. Leon Bridges sported a blue suede cowboy jacket from Bode, while Jennifer Lopez’s plunging beaded Ralph Lauren gown, faux fur bolero and leather hat had a whiff of the million-acre ranch, and Kim Petras’s Collina Strada came complete with … a horse head. So was the melting pot, thanks to the co-host Naomi Osaka, in a Louis Vuitton gown that referenced her Haitian and Japanese roots.

There was denim, obviously, as modeled by Ben Platt, David Byrne and Lupita Nyong’o in a molded Versace jean bustier.

Also a lot of red, white, and blue, sometimes all in one outfit, such as Megan Rapinoe’s Sergio Hudson pantsuit (in what turned into one of the trends of the night, her bag also had a message: “In Gay We Trust); sometimes in a designer’s matching guests, such as Stella McCartney’s troika of Ella Emhoff in red trousers and top, Julia Garner in a white sheer gown and Nia Dennis in a blue bodysuit. 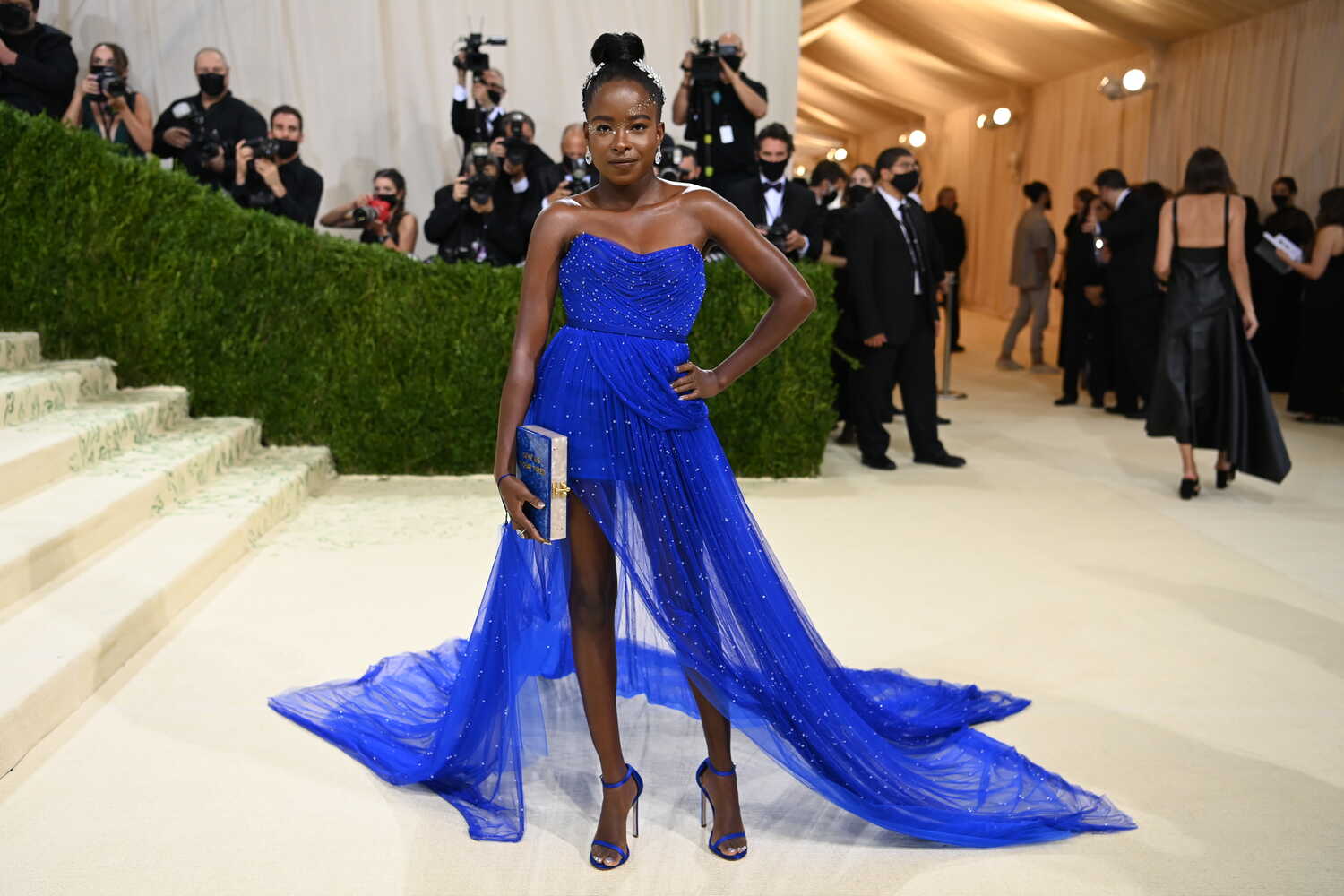 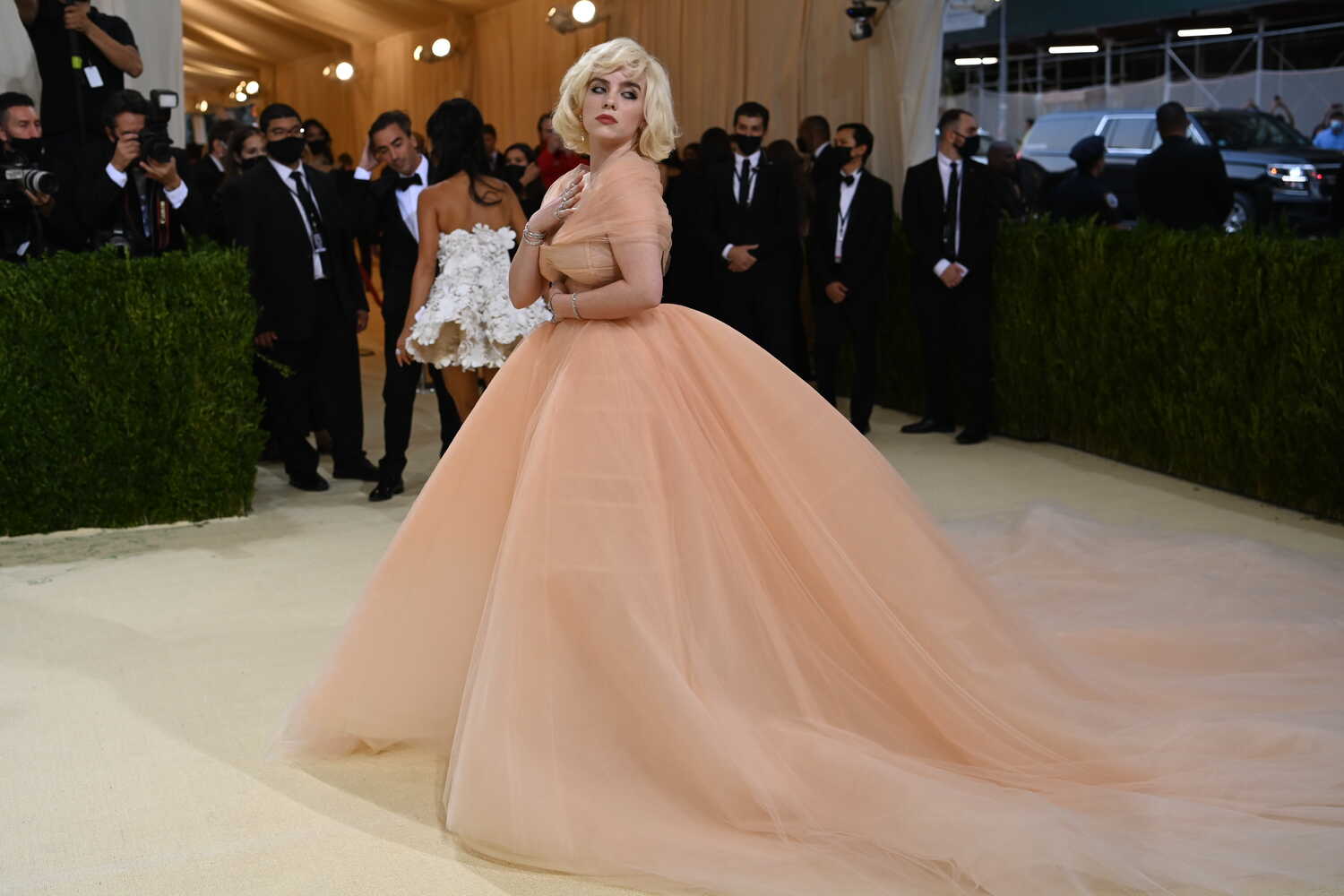 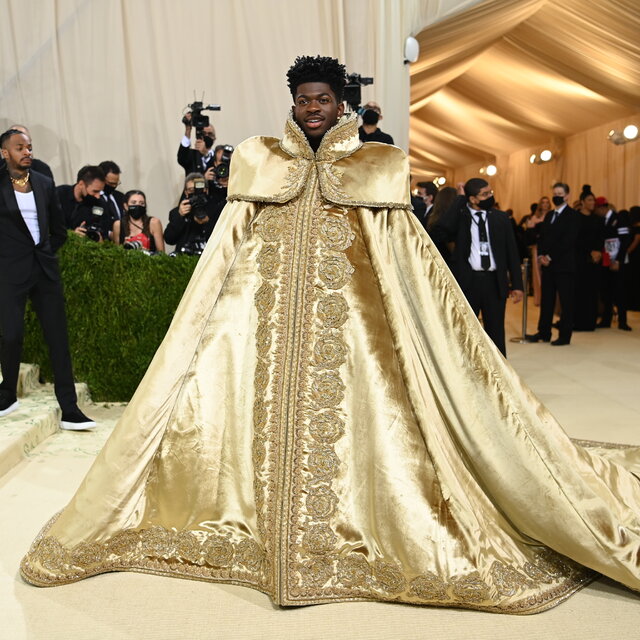 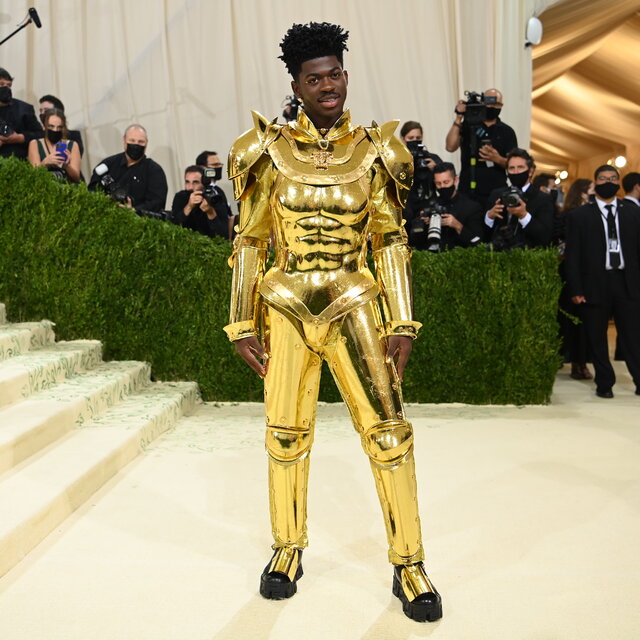 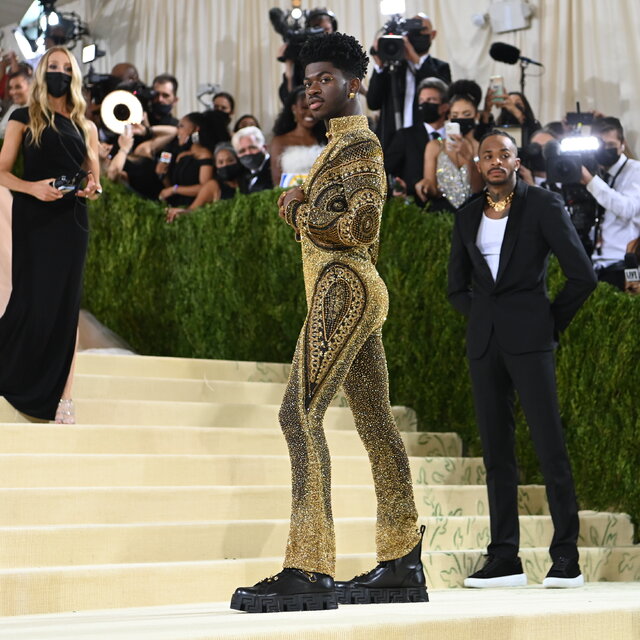 Or maybe it was a superhero suit? That’s how Serena Williams said she thought about her silver Gucci number, worn under a gigantic feathered cape — like a couture caped crusader.

Likewise caped and crusading: Lil Nas X, who shed his regal Versace outerwear to reveal a gleaming gold C-3PO suit, which he then jettisoned to expose a crystal-beaded bodysuit — an LGBTQ+ parable in clothes about the power of revealing your true self. It echoed Dan Levy’s billowing Loewe outfit, based on a work by the late American artist and activist David Wojnarowicz featuring an appliqué of two men kissing on the front, framed by lapping water and a map of the world.

The sartorial metaphors didn’t end there.

Ciara played her part in a lime green sequined Dundas football jersey gown with her husband Russell Wilson’s Seattle Seahawks number on the front and his Super Bowl ring on her finger. Amanda Gorman, also a co-host, came as an interpretation of the Statue of Liberty, thanks to a sparkling deep blue Vera Wang gown illuminated by more than 3,000 crystals, carrying a book clutch with the title “Give US Your Tired,” a nod to the Emma Lazarus poem at the statue’s base. Homages to other statuesque women like Barbie and Marilyn Monroe combined with a touch of Disney’s “Cinderella in the gigantic nude Oscar de la Renta ball gown of the co-host Billie Eilish.

Even the humble canvas Converse All Stars had a moment courtesy of the co-host Timothée Chalamet, in almost all white with an edge of black via a Haider Ackermann jacket and Rick Owens shirt, meant to pay homage to his kicks. ”) 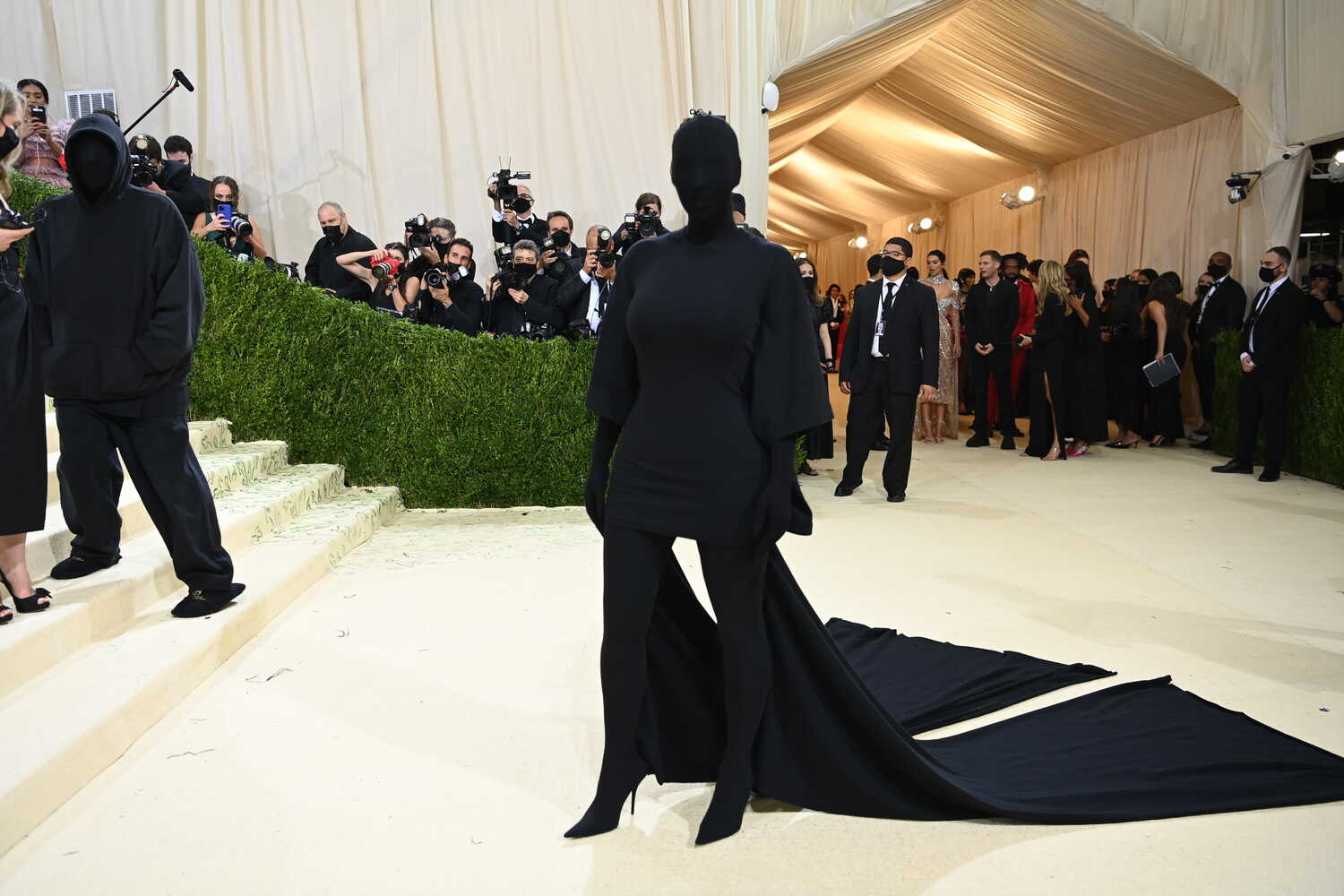 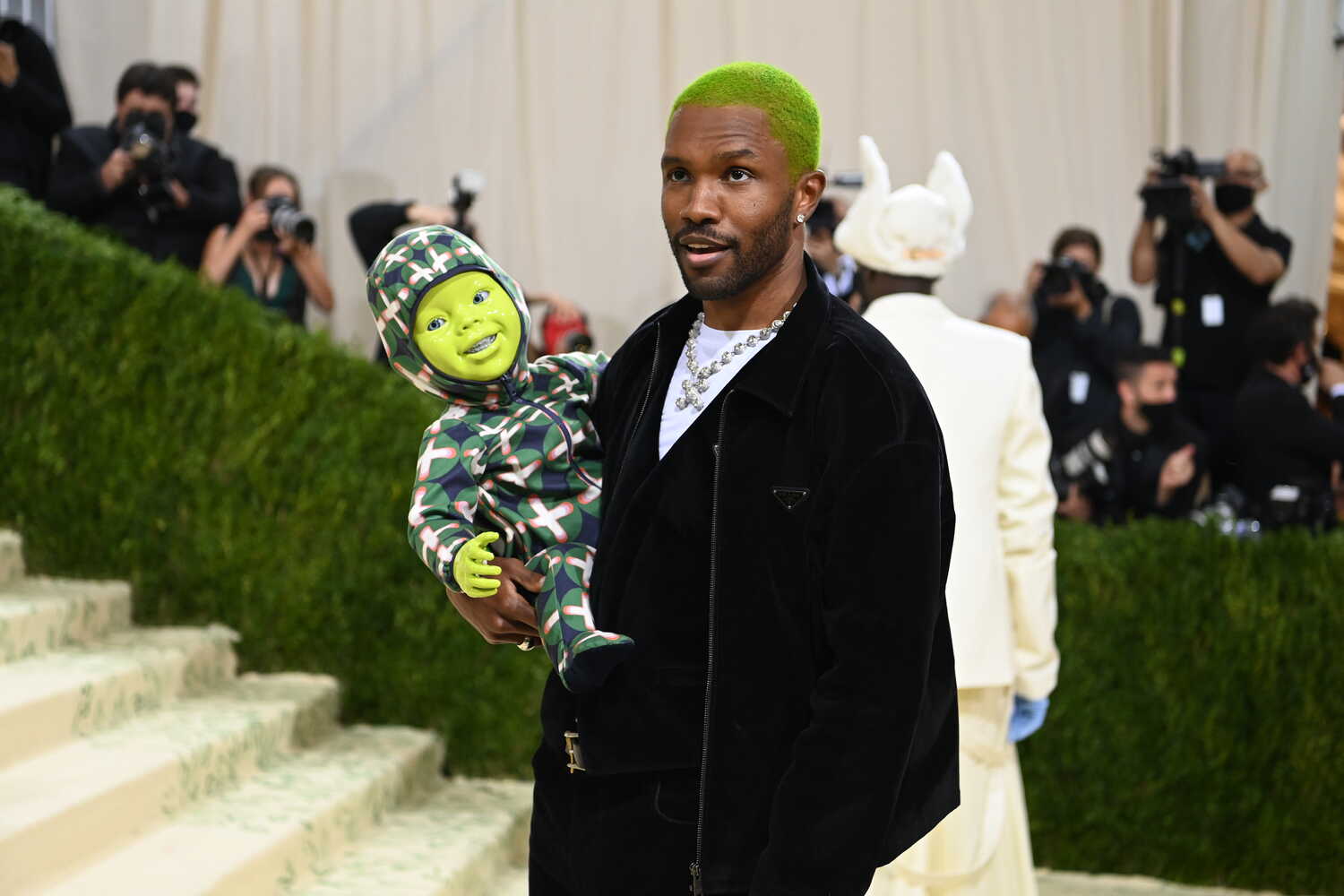 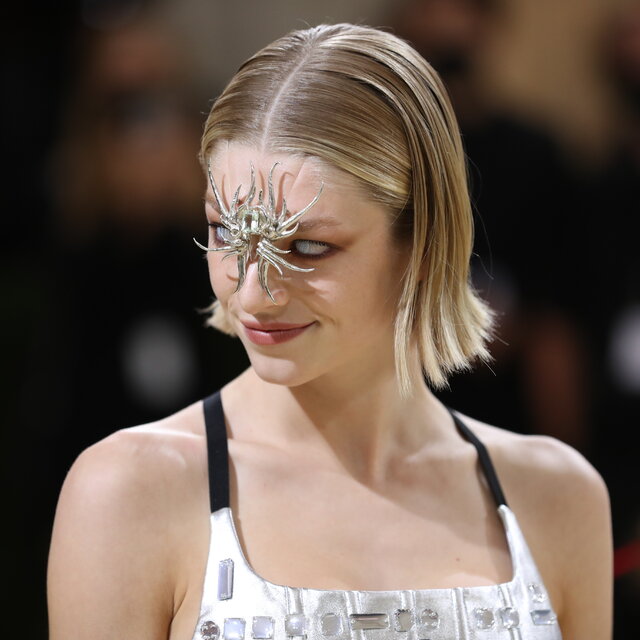 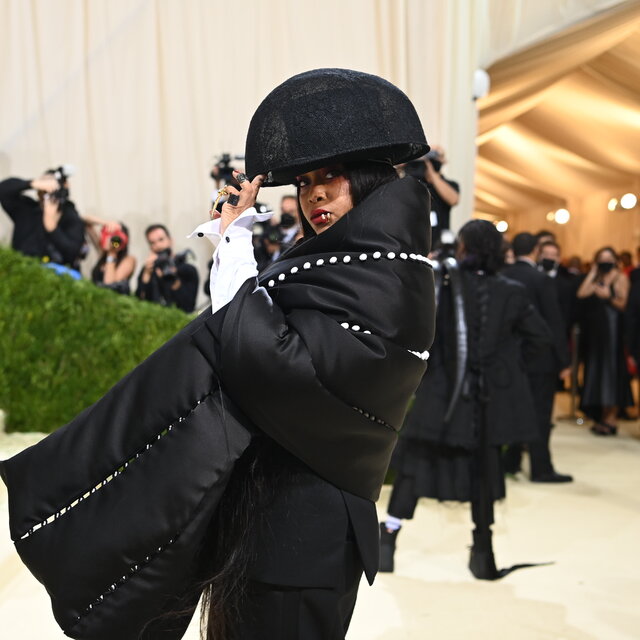 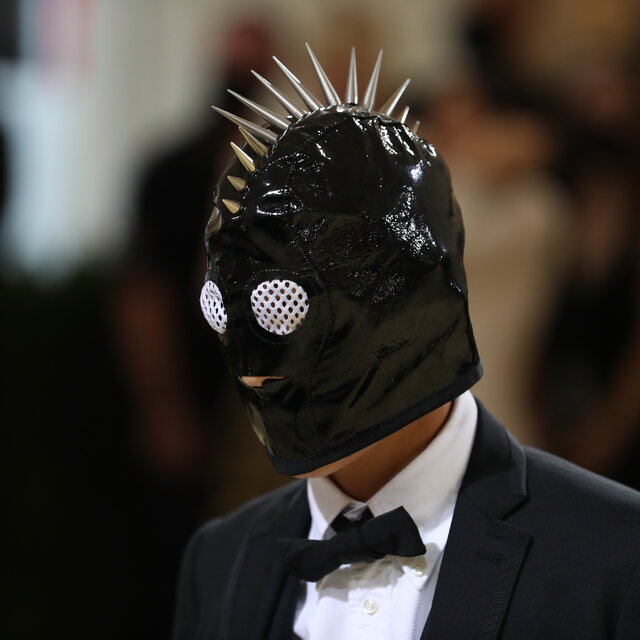 But there was also the looming look of doom. Fair enough; it’s part of the story of this country, too: Hunter Schaffer’s bulging, zombie-white contact lenses or Kim Kardashian’s face-obscuring Balenciaga body stocking, gloves and dress with train, turning her into a shadow of herself. Evan Mock wore archival Thom Browne shorts with a black patent leather mask on his head, suggesting fetish and bondage. Erykah Badu also had a Thom Browne bubble obscuring her features — though as far as unsettling accessories go, Frank Ocean, in Prada, birthed the best memes with a robotic green baby doll that matched his bright green hair.

Not a bad reminder, really, that this is a country full of people from elsewhere, and many of us were once aliens in the land.