The moment when the best actor winner hit Chris Rock on stage overshadowed the awards themselves – and symbolised everything wrong with this year’s event, writes Nicholas Barber.T

Yes, that actually happened. If you weren’t watching the ceremony, you might assume that the reports had been exaggerated, or that the whole thing had been set up in advance. Even if you were watching, Smith’s fury was so shocking that it was difficult to process. But it’s true. Rock was on stage to present the documentary prize, he made a mean joke about Jada Pinkett Smith’s short hair – which is a result of alopecia – reminding him of Demi Moore’s shaven head in GI Jane – and suddenly Smith reminded us all of his Muhammad Ali biopic. Somehow, a shaken Rock carried on with the presentation, and somehow the ceremony itself kept going, but there was more surrealism to come. As was widely predicted, Smith won the best actor Oscar for his performance in King Richard. And so, just a few minutes after he had been on stage assaulting someone on live television, he was back on the same stage, receiving a standing ovation, and tearfully declaring: “I want to be a vessel for love”. Seriously. Who knows what he’d be like if he wanted to be a vessel for hate.

If it hadn’t been for Smith’s violence, some other moments might have made more headlines. It was touching when Ariana DeBose won best supporting actress for West Side Story, celebrating being a queer woman of colour in her speech, and when Troy Kotsur, who is deaf, won best supporting actor for Coda. It was encouraging that Jane Campion, director of The Power of the Dog, became the third woman to win the best director prize. It was sweet to see Billie Eilish’s giddy, giggly joy when she and her brother Finneas O’Connell won the best original song prize for No Time To Die, and to see Lady Gaga being so supportive when she was on stage with Liza Minnelli to present best picture.

The three hosts were off stage for such long stretches that you forgot all about them. Instead of bringing the ceremony together, they made it more disjointed

But these sparkling highlights accounted for a small proportion of the ceremony’s three hours and forty minutes. For the rest of the time, it was a shambles: a dispiriting jumble of botched introductions, ill-timed advert breaks, insensitive music choices, creaking comedy, and uninspired production. Smith’s slap only added to the sense that the evening was out of control.

There was so much that just wasn’t right. The show opened with a musical number from Beyoncé, with a whole crowd of dancers and a live band in matching tennis-ball-coloured outfits. But rather than being in the Dolby Theatre, the number was staged on a tennis court in Compton with no audience present, so it didn’t bring any energy or party atmosphere to proceedings. 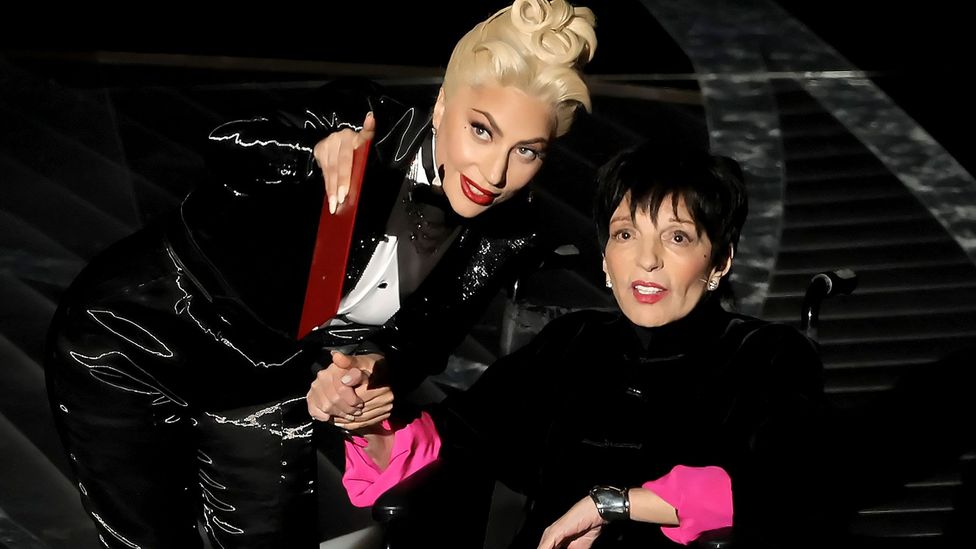 Lady Gaga and Liza Minnelli’s sweet moment together presenting best picture was one of the night’s highlights (Credit: Getty Images)

After that, Regina Hall, Amy Schumer and Wanda Sykes were introduced as the hosts, only for DJ Khaled to charge on stage and introduce them again. The Oscars hadn’t had an overall host (or hosts) for the previous three years, so their appointment suggested that the Academy was getting its confidence back after last year’s low-key, mid-pandemic prize-giving. It didn’t seem like that for long. The women made some ill-judged gags about wanting to grope the best-looking actors in the room and how they couldn’t get through to the end of The Power of the Dog, but they were off stage for such long stretches that you forgot all about them. Instead of bringing the ceremony together, they made it more disjointed.

The biggest problem in that regard was that eight awards were handed out before the live broadcast began, and the acceptance speeches were then edited, at odd junctures, into the ceremony. Supposedly, this was a failed attempt to reduce the running time, but its main effect was to break up the flow of the evening. The same went for the addition of two categories which had been voted for on Twitter. In the #OscarCheerMoment category, the winner was: The Flash enters the speed force in Zack Snyder’s Justice League, never mind that this sequence wasn’t even the best “Cheer Moment” in Zack Snyder’s Justice League, let alone in the history of cinema. The #FanFavourite film was Army of The Dead, also directed by Zack Snyder, so the two choices proved nothing except that Snyder’s fan base is extremely well organised.

We had Samuel L Jackson, John Travolta and Uma Thurman presenting an award to celebrate the 28th anniversary of Pulp Fiction. Are we really celebrating 28th anniversaries now?

These time-wasting categories were an insult to the Oscar winners who had had their own hard-earned triumphs consigned to the pre-broadcast slot, not to mention those who had to hurry through their acceptance speeches as part of the live broadcast. When Drive My Car won best international film, its director, Ryusuke Hamaguchi, was literally pushed off the stage after his first few sentences.

The lack of imagination was pathetic, too. A tribute to James Bond on the series’ 60th anniversary was logical enough, but why a montage of film clips introduced by three extreme sports athletes? The 50th anniversary tribute to The Godfather was just as rudimentary. And then we had Samuel L Jackson, John Travolta and Uma Thurman presenting an award together to celebrate the 28th anniversary of Pulp Fiction. Are we really celebrating 28th anniversaries now?

From the second it happened, the night’s big story was always going to be Smith’s slap, but if everything else had been more enjoyable and professional then maybe it would have seemed like an unfortunate blip as opposed to a symbol of everything that was wrong with the event. At the start, Schumer made a joke about the decline and fall of the Golden Globes: once an important, high-profile awards ceremony, now so mired in scandal that it was held in private this year. Three and a half hours later, the Academy Awards couldn’t afford to be so smug. If this farrago was the best the producers could come up with, then maybe next year’s Oscars should be held in private, too.