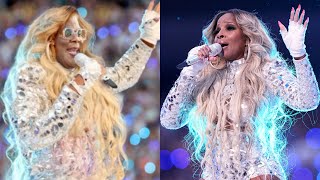 Blige, who wore a white bodysuit donned with crystals, performed at the event this past weekend alongside rappers Dr. Dre, Eminem, Kendrick Lamar and 50 Cent. In the Instagram post, Perry shared two digitally altered images of Blige’s halftime show set, along with a detailed story about how his character Madea Simmons had the outfit first.

He jokingly said, “MADEA J BLIGE I rocked the Super Bowl! Thank you to all my 10’s of fans. I was performing in the parking lot cause I think they was jealous. I had this out fit first and they made Mary’s with the little fabric they had left.

The 52-year-old wrapped up the caption by playfully throwing shots at Blige. Perry stated that despite the vocalist being deemed the “queen” of hip-hop and soul, his character Madea rocked the parking lot with her “No More Obama” performance. The fictional song is a parody of Blige’s 2001 single “No More Drama.”

“She (Blige) think she the only queen of hip hop soul, but I showed them. God made a way. I rocked it! I mean. I rocked the car I was standing on but you get the picture. These pictures are from me performing my song about someone I miss. It’s called No More Obama.”

As Perry’s upload began circulating online, many fans couldn’t contain their composure and expressed how funny the post was.

“But why I just hollered out so loud! Tyler Perry you play to much.”

“I never comment but Tyler!!! Madea has officially taken me out this morning.”

“I. JUST. DIED. ABSOLUTELY THE FUNNIEST THING I HAVE EVER SEEN. YOU MR. PERRY ARE A ONE OF A KIND GENIUS!!”

All jokes aside, Blige has yet to respond to Perry’s latest upload. Perry’s Netflix film “A Madea Homecoming” will be released on the streaming app on Feb. 25.