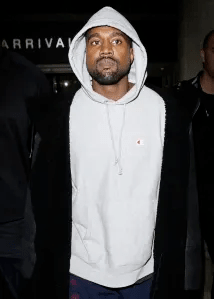 He added, claiming: “I’ve been beat to a pulp and there’s still no accountability.”

Balenciaga, Adidas, Gap, Vogue magazineand CAA (Creative Artists Agency) all cut ties with the Yeezy designer after his controversial antics earlier this month. In a heated Twitter rant, West claimed that he wanted to go “death con 3” on individuals of Jewish faith.

“I will say I’m sorry for the people that I hurt with the ‘death con’ [comments],” the “Heartless” rapper said during an October 19 appearance on Piers Morgan Uncensored. “I feel like I caused hurt and confusion. And I’m sorry for the families of the people that had nothing to do with the trauma that I had been through, and that I used my platform where you say hurt people hurt people. I was hurt.”

While West has continued to assert that he stands behind his message, he’s been publicly condemned by other celebrities and companies for his remarks.

“Hate speech is never OK or excusable,” Kim Kardashian, who split from the Grammy winner in February 2021, tweeted on Monday, October 24. “I stand together with the Jewish community and call on the terrible violence and hateful rhetoric towards them to come to an immediate end.”

“I do certain things from a feeling, I just channel the energy. It just feels right. It’s using a gut instinct, a connection with God and just brilliance,” West said during an October 6 appearance on Tucker Carlson Tonight. “People, they’re looking for an explanation and [they] say, ‘Well, as an artist you don’t have to give an explanation,’ but as a leader, you do. So the answer to why I wrote ‘White Lives Matter’ on a shirt is because they do. It’s the obvious thing.”

West’s business changes have also impacted his overall net worth, as he is no longer recognized as a billionaire with the income from his various fashion collaborations. According to Forbes, the Grammy winner’s earnings currently come from real estate holdings, music and a 5 percent stake in Kardashian’s Skims company.

“The ‘unknown powers’ are trying to destroy my life off of a tweet,” West wrote on Saturday, referring to his initial, since-deleted Twitter post. “So does this prove that my so-called suspicion was true? Leading with love. This is #lovespeech.”