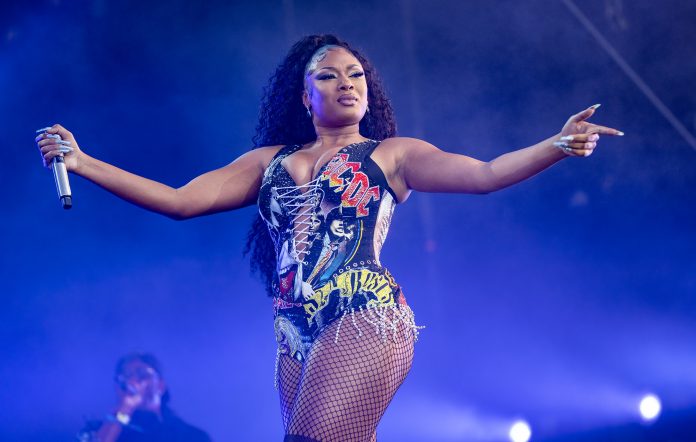 The rapper has accused her label, 1501 Certified Entertainment, of preventing the remix’s release

Megan Thee Stallion has been cleared by a judge to release her remix of the BTS song ‘Butter’, after the rapper accused her label, 1501 Certified Entertainment, and distributor 300 Entertainment of blocking its release.

The remake will arrive this Friday (August 27), both Megan and BTS have confirmed on social media. “Y’all don’t even understand how excited I am,” the rapper tweeted.

The rapper – referred to in documents by her real name Megan Pete – had filed a petition in a Texas court on Tuesday (August 24), seeking emergency relief before this Friday (August 27) to allow her to release the remix as scheduled.

As reported by Variety, the filing claimed that if Megan was not allowed to release the remix this Friday, “her music career will suffer irreparable damage, including a devastating impact to her relationships with her fans and with other recording artists in the music industry”.

Further, Megan’s lawyer claimed 1501 was not signing off on the remix’s release because it did not believe it was “good for her career as a recording artist”.

Pete had previously taken her label to court, claiming it was preventing her from releasing her 2020 EP ‘Suga’. A Texas judge sided with the rapper in this case in March 2020, ordering 1501 “to do nothing to prevent the release, distribution, and sale of Pete’s new records”. The new lawsuit alleges 1501 was in violation of last year’s court ruling.

“The release of new music from Pete is vital to maintain her status as a relatively new but still up-and-coming artist,” the new filing reads.Advertisement

“Absent immediate help from the Court, Pete’s art will be impacted, the release of the song derailed, and Pete’s goodwill, reputation, and overall career will suffer detrimental, undesirable, and irreversible harm.”

Though last March she filed paperwork to get out of her record deal, Megan reportedly remains under contract to 1501, with her music distributed by 300 Entertainment.

Megan has been cleared to release the remix after the court granted her an temporary restraining order, Billboard reports.

The court also reportedly found that 1501, its CEO Carl Crawford, his partner James Prince and 300 Entertainment “have recently engaged and will continue to engage in conduct preventing the release of her new music, which would irreparably damage her goodwill, reputation, and overall music career and infringes on her rights to self-expression through her music”.

A new hearing has been set for September 10.

In a separate court case recently, a judge ruled Tory Lanez violated the protective order made against him by Megan after he made a surprise appearance at the Rolling Loud festival in Miami last month, where Megan was a performer on the bill.