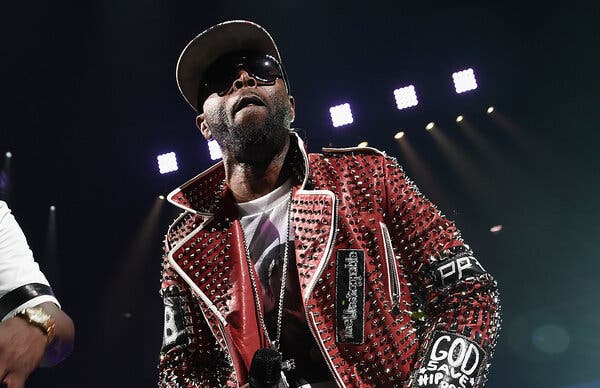 A star for Bad Boy Records after the Notorious B.I.G.’s death, the rapper had a husky, seen-it-all voice even as a young man.

Robert Ross, the rapper known as Black Rob, whose husky, seen-it-all voice powered turn-of-the-millennium hits like “Whoa!” and “Can I Live” for Bad Boy Records, died on Saturday at Grady Memorial Hospital in Atlanta. He was 52.

The cause was cardiac arrest, said Mark Curry, a friend and one-time Bad Boy artist, who added that Mr. Ross had numerous health issues in recent years, including diabetes, lupus, kidney failure and multiple strokes.

Mr. Ross had been undergoing dialysis and was discharged from Piedmont Atlanta Hospital this month, Mr. Curry said. In a video that was posted online and spread across the hip-hop world, Mr. Ross detailed his ailments and recent struggles with homelessness.

“He didn’t have a home, but he always had us,” said Mr. Curry, who called Mr. Ross “a true poet.” He added: “He’s known for telling stories and his music described his life. You can feel it.”

Last week, Mr. Curry, along with the producer Mike Zombie, began promoting a GoFundMe campaign to raise money for Mr. Ross — “to help him find a home, pay for medical help and stability during these trying times,” the campaign’s description said. The fund-raiser collected about half of its $50,000 goal.

Mr. Ross, who was born in Harlem, N.Y., began rapping around the age of 11, influenced by local artists like Slick Rick and Doug E. Fresh, whom he credited for helping to develop his storytelling prowess. He also internalized the essence of his musically ascendant neighborhood, citing its “pick-me-up kinda sound.”

Best known for the hard-hitting 2000 single “Whoa!”, which reached No. 43 on the Billboard Hot 100, and a string of electric guest verses on songs by Mase, 112 and Total, Mr. Ross could sound both motivated and weathered even as a young man.

Thrust into more of a leading role after the murder of his Bad Boy label mate, the Notorious B.I.G., in March 1997, the rapper became another fast-burning star under the imprimatur of the budding hip-hop mogul Sean Combs, better known as Diddy, by the end of the 1990s.

Mr. Ross’s debut album, the fittingly named “Life Story,” was released by Bad Boy in 2000, when he was 31. Already, he had spent more than a decade of his life in and out of juvenile detention, jail and prison, and the music reflected that.

“It’s hell,” the rapper said at the time of his past. “Once they get their teeth on you, they keep biting, until they feel like, ‘Let’s throw away the key on this cat.’”

“Life Story” featured intricate street tales of stickups, shootouts and the family struggles that could lead to such things, and it reached No. 3 on the Billboard album chart, eventually becoming platinum.

Five years later, “The Black Rob Report,” the rapper’s second album, failed to find the same success, in part because Mr. Ross was back in prison, having failed to report to sentencing for a 2004 larceny charge. His career never recovered.

“Bad Boy left me for dead,” Mr. Ross said upon his release from prison in 2010. Two subsequent independent releases on different labels foundered.

On Twitter, L.L. Cool J described Mr. Ross as a storyteller, gentleman and an M.C.

Ms. Elliott lamented that the death of Mr. Ross closely followed that of another New York rapper, Earl Simmons, known as DMX, who died this month.

“It’s hard finding the words to say when someone passes away,” Ms. Elliott said on Twitter. “I am Praying for both of their families for healing.”