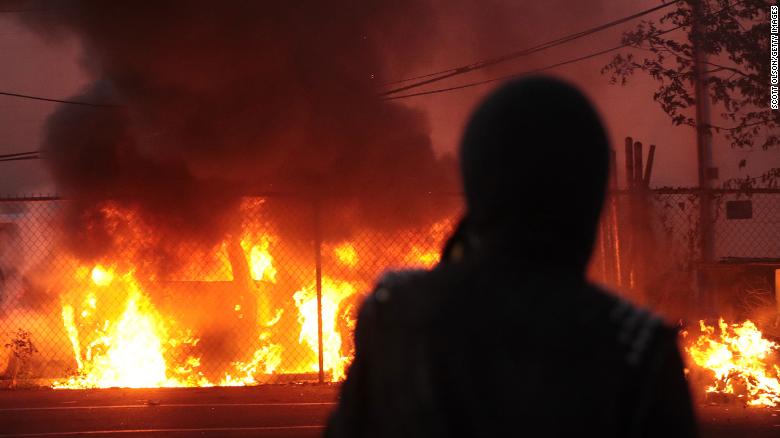 A person in Minneapolis, Minnesota watches vehicles burn during a May 29 protest sparked by the death of George Floyd.

(CNN)As protests over police brutality and systemic racism sweep the nation, authorities have partly blamed incidents of property destruction and violence on people they deem ‘outside agitators.’

What we do and don’t know about the extremists taking part in riots across the USWhile officials are still trying to quantify just how significanta role outside groups are playing in the unrest, it’s clear that the label ‘outside agitators’ has been used broadly to describe a number of different groups.Content by CNN UnderscoredYour guide to picking the right bidet for you and your budgetBidets may seem like a technology that’s out of reach and reserved for the rich. In reality, bidets are much more accessible than you may think.And that’s something experts and scholars say we should be careful of.The narrative of the ‘outside agitator’ has long been used to undermine protest movements in the United States. Even Civil Rights Movement leader Martin Luther King Jr. — often invoked in conversations today about how people should demonstrate — was referred to by Southern white people as an outside agitator.Here’s why experts say we should be wary of that narrative.

It’s been used to discredit protests

Framing the unrest as caused solely by outside agitators suggests that the protesters involved in social change movements are carrying out someone else’s nefarious agenda, rather than mobilizing over legitimate concerns of their own, said Aldon Morris, professor of sociology and African American history at Northwestern University.”It suggests that they don’t have the wherewithal, the agency, to organize and to mobilize and to lead protest movements,” Morris told CNN. “In that sense then, if they are incapable of doing that, then surely it must be the work of others outside the protest community.”

99 years ago today, America was shaken by one of its deadliest acts of racial violenceDuring the 1921 Tulsa race massacre, when a white mob attacked black residents and burned black-owned businesses in Tulsa’s Greenwood District, Oklahoma leaders and white Tulsans blamed outside agitators for inciting black residents to seek racial equality.That included scholar, teacher and activist W.E.B. DuBois, who was described by Oklahoma’s governor at the time as “an agitator of the worst type.”DuBois had visited Oklahoma a few months earlier and likely raised consciousness about injustices against black people, wrote Alfred Brophy in the book “Reconstructing the Dreamland: The Tulsa Riot of 1921.” And though it was a white mob that attacked the city’s black community, officials and police suggested that DuBois and the black press provoked it. 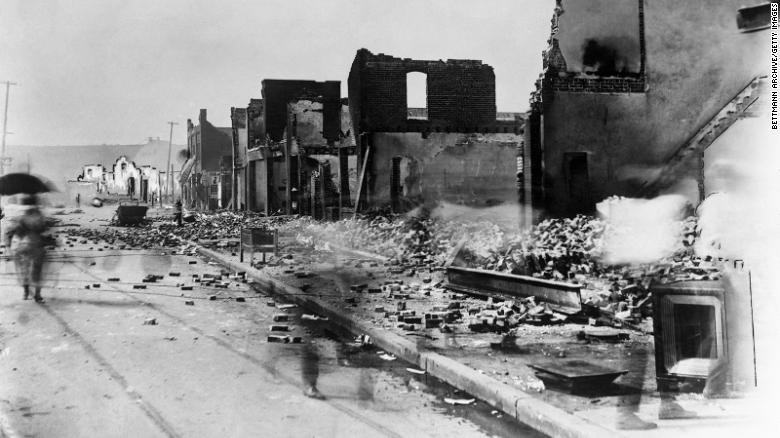 An image shows the aftermath of the white mobs that attacked black residents and businesses of the Greenwood District in Tulsa, Oklahoma.Morris, who has studied social movements for decades, said that data has shown claims about outsiders playing a significant role in demonstrations are unproven. In reality, most of the people leading and participating in demonstrations are from oppressed communities.In Minnesota, evidence of outside involvement has so far been thin.The Star Tribune reported last week that data from Hennepin County showed more Minnesotans were arrested during protests than people from out of state. An analysis conducted by the local TV station KARE found similar results.The data is inconclusive, and at least one report alleged that a man from out of state encouraged violence against law enforcement. But such actors are likely not the norm, Morris said.”I am not then saying that there aren’t agent provocateurs operating in the current uprisings,” he said. “But there can be little doubt that this is a major movement by people with legitimate grievances and their allies.”

It distracts from the underlying causes

Emphasizing the destruction of property and the role of outsiders in demonstrations distracts from the issues that prompted people to take to the streets, Morris said.Though demonstrations in cities across the US were sparked by the killing of George Floyd, the anger and frustration goes beyond that. Many protesters are also driven to demonstrate because of systemic racism, wealth and income disparities and the disproportionate impact that the coronavirus pandemic has had on people of color.

US black-white inequality in 6 stark chartsAttributing the unrest to outsiders implies that the majority of oppressed people are content with the status quo, said Morris. It’s also an attitude that was often displayed by white Southerners during the 1960s Civil Rights Movement.”Southern white segregationists believed that ‘their Negroes’ were content with the social conditions under which they lived, that they did not have any legitimate grievances and that there’s no way that they would rebel under the Jim Crow system,” he said.This dynamic played out during the 1964 Mississippi Summer Project, said Kathleen Fitzgerald, a teaching assistant professor of sociology at the University of North Carolina. 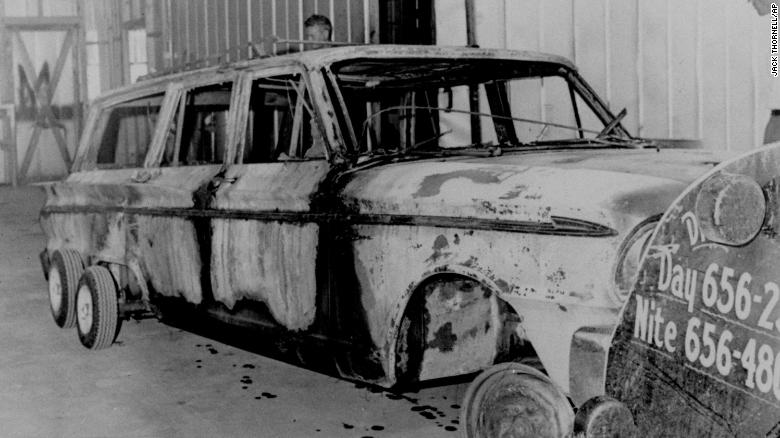 Investigators locked up the charred station wagon three civil rights activists who went missing during the 1964 Freedom Summer Project in Mississippi.The campaign, organized by the Student Nonviolent Coordinating Committee (SNCC), was intended to highlight the disenfranchisement of black people in Mississippi. That year, a group of mostly white college students from the North traveled to Mississippi to help register black voters and open up freedom schools to teach literacy and civics. Southerners dismissed the volunteers as outsiders.”When they use that narrative, it’s an assumption that no locals would agree with these actions and no locals are on board,” Fitzgerald said. “And that’s certainly not true.”

It ignores the fact that movements are connected

Organizers and activists often travel beyond their own regions to demonstrate around causes that they have a stake in. Automatically casting suspicion on all protesters from out of town ignores the way that social change movements work, Morris said.”Black people have never been just a localized population,” he said. “We have national grievances, and it would be narrow minded to think that black people therefore would not be involved in social change movements that were aimed at trying to liberate the black community overall.” 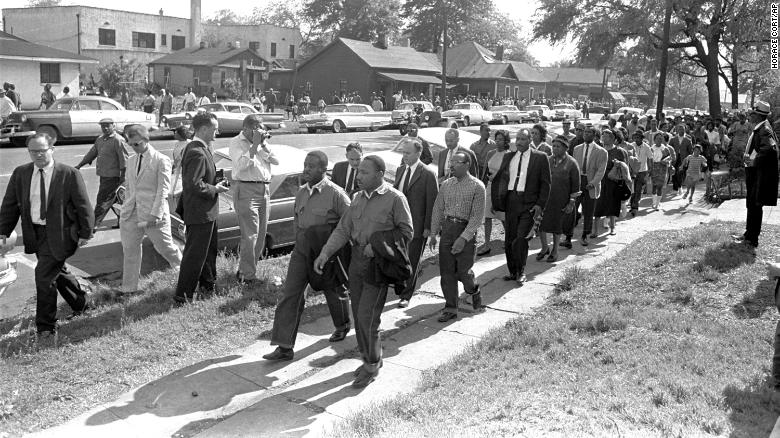 Rev. Ralph Abernathy and Rev. Martin Luther King Jr. lead a column of demonstrators as they attempt to march on Birmingham, Alabama, on April 12, 1963.The same was true during the Civil Rights Movement. Martin Luther King Jr. and other activists involved in the Southern Christian Leadership Conference were often called in to assist with demonstrations in cities across the South.When civil rights leaders organized a campaign in 1963 to bring attention to segregation in Birmingham, Alabama, white religious leaders described King and other protesters as outsiders stirring up trouble.King specifically rejected the “narrow, provincial‘outside agitator’ idea.”“I cannot sit idly by in Atlanta and not be concerned about what happens in Birmingham,” he famously wrote in Letter from a Birmingham Jail. “Injustice anywhere is a threat to justice everywhere. We are caught in an inescapable network of mutuality, tied in a single garment of destiny. Whatever affects one directly, affects all indirectly.”

The outside agitator narrative can also be used to justify violence against protesters.New York City Mayor Bill de Blasio defended the city’s police department after a video appeared to show an NYPD truck plowing through a crowd of people during a protest. In doing so, he cited the influence of outsiders.

Police brutality prompted the protests. In some cities, the police response only proved the protesters’ point“It’s clear that a different element has come into play here who are trying to hurt police officers and trying to damage their vehicles,” de Blasio said on Saturday.Trump has also invoked outside groups when threatening military force.In a speech earlier this week, Trump said that the nation “has been gripped by professional anarchists, violent mobs, or, arsonists, looters, criminals, rider rioters, antifa and others” and said he had directed governors to deploy the National Guard to “dominate the streets.”During and after the remarks, peaceful protesters outside the White House gates were dispersed with tear gas, flash grenades and rubber bullets — apparently so the President could visit a nearby church.”When you can delegitimize authentic expressions of discontent, then you can mobilize violent force against them,” Morris said.

It prevents the movement from growing

Finally, focusing attention on property destruction and casting demonstrations as being corrupted by outside agitators can turn away people who might otherwise be supportive.The outside agitator narrative has been used to deter sympathy for past movements, and the same is happening today, said Fitzgerald.What protesters say is fueling their angerGetting large numbers of people to mobilize in the streets is critical for social movements. When officials suggest that those social movements are being influenced by people with varying agendas, some potential supporters may equate property destruction with the loss of black life and choose to stay at home, she said.”It’s meant to make us question what before we wouldn’t have questioned,” Fitzgerald said.The demonstrations playing out across the the nation right now have complex roots. And though there may be bad actors who are attempting to exploit the pain of communities, there is no one simple narrative.So as some authorities blame outsiders for the unrest that’s playing out, experts say they might do well to consider what brought people to the streets in the first place. The Minneapolis police precinct is set on fire